I started a 3 part guide to streaming…

I’m liking it so far. Could end up being a very good resource to point newbies too, and I’m personally looking forward to your coverage of audio stuff (where I’m probably weakest, though what I’ve got is working for me).

I really love the options it gives you. great tutorial format. 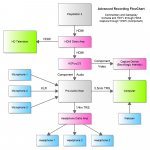 Building a stream setup is an incremental process. First you need to put together a system to record your games, then you need to add vocal commentary,...

I would like to argue that you don’t need a $40 monster cable. You can buy good quality cables for decent prices if you look hard enough. I’ve owned monster cables and I’ll honestly say that I’ve bought other cables for half the monster price that have lasted longer. When you buy monster, you buy the name along with the quality you want. That same quality can be had for cheaper provided you don’t need a brand name associated with it. I don’t buy cables from monoprice(I wouldn’t), but I don’t buy the most expensive stuff either.

Anybody who strives for high quality audio should know that a name isn’t everything. There are some amazing pairs of headphones from these no name brands that 99% of people have never heard of that sound the same, or better than a similarly priced model from a name brand.

Still, it’s a great guide that should help many people get where they want to be.

Monster Cable has a lifetime guarantee with Guitar Center… if the cable breaks, you walk in with the cable, walk out with a new one… don’t have to pay a cent.

Hey jaxel. Did you go onto my cellphone and take photos off it or your avatar? Lol

Hey jaxel. Did you go onto my cellphone and take photos off it or your avatar? Lol

Part 4 will be coming in the future…

As soon as xsplit gets an inbuilt audio-mixer and on-the-fly shot configuring Wirecast is going to get thrown in the scrubdumpster and not let out!

I’m also looking forward to XSplit getting a little more stable. I can’t stand the scaling/alignment controls (among a slew of other things) in WireCast, and it doesn’t work well with my Logitech Cameras (C910 & C510, can’t get either to go widescreen in it), but the stability and not-in-beta nature of it makes it more reliable (for the most part). Worked for two weeks in October, prepping XSplit to use for a charity stream, and then the night before the event it got an update or something and started desync’ing/delaying the video from my BMIP. Fell back on Wirecast and made it work, but it took me all night to prep the resources, and I was still having to change things/make new stuff during the event itself. Way too high stress. I’m sticking with WireCast until XSplit goes Gold, then I’ll give it another shot (I’ve already bought my license, since I’m really rooting for it).

I generally use a mix of other software to control my audio (Virtual Audio Cable primarily; my needs are fairly simple, though, and mostly handled in the mixer anyway) during streams, so XSplit’s simplified nature doesn’t bother me too much… but yeah, better control of that stuff would be nice.

Also, I don’t have any real problems with the XML polling system; I actually wrote a management script that preps XML specifically to load into XSplit so that I don’t have to go modify the file myself during an event (it can handle match info, etc.), so I’m a big fan of their model, but it could certainly use master layers and such anyway. Not everyone knows XML, and people shouldn’t have to anyway.

Kidding kidding. Jaxel, it’s Harry. Sam’s Navy friend. It kills me that the Department of Defense network doesn’t like Twitch. Can’t even go through proxies, 'cause proxies are banned on the network.

Word of advice for XSplit users, I’m using the professional license and so far in my experience you get many more features and much greater stability than the free beta. The licensed versions feel much more complete. Been streaming on it for over a month now no problems.