This is shocking to say the least. After the attack the killers talks to a passersby explaining why he did it. They were later shot by armed police and taken to hospital.

As you might expect social networks have been flooded with sympathy for the soldier’s family as well as a lot of ignorance aimed at muslims.

This guy doesn’t realize the killers were from Nigeria

EDL (english defence league - racist right wing group) I using this to incite violence, they are reports of mosques being attacked.

radical muslim does something crazy, meh, we’ll ignore the racial and religious implications of it

Muslims need to start policing their own or this shit will never end.

At least they have AIDS. I mean, odds are.

i just heard about this today…thats fuckin insane.

Niggas just mad cause the

radical muslim does something crazy, meh, we’ll ignore the racial and religious implications of it

Muslims need to start policing their own or this shit will never end.

Muslims Call For Destruction of Pyramids

Elsewhere, two men were arrested after separate attacks on mosques. A 43-year-old man is in custody on suspicion of attempted arson after reportedly walking into a mosque with a knife in Braintree, Essex. The secretary of the mosque, Sikander Saleemy, told Channel 4 News he felt it was a “revenge attack”.

What a hero moron

I might say something problematic, but when the soldier was killed, there was a shitstorm by our right wing comrades, because a “Muslim” killed a “Christian”, however when it would have been the other way around, these guys would celebrate it, cause the homeland has been defended or whatever.

The woman who confronted one of the killers speaks to the BBC - http://www.bbc.co.uk/news/uk-22635379
She didn’t realize they killed a man, till she noticed him carrying a gun and knife. Brave woman

ne0phyte is in London right now. These EDL dickheads were rioting in front of the hotel she’s staying in.

From what I’ve heard in the BBC news site earlier today the victim was hit by a car then hacked to death by a machete or axe in public in broad daylight. That’s something that I would imagine happening in-game in GTA or Saint’s Row, not real life.

Also, the last I heard was that two men were shot and both are being held in a hospital under armed guard. Are these two men confirmed to be the killers or has there been no news on what happened to those two yet?

That photo of the man holding a cleaver while talking to that woman is rather unsettling. Aside from that, this is quite horrible.

I don’t know what’s worse the taking of a life or the fact that such an act of violence will be a political springboard for others to cause more violence and/or further their own agendas.

Theres a video of him explaining why he did it thats floating around the internet if you’ve not seen it.

BBC interview a man who says he met the man accused of the murder 2 weeks prior at his mosque. The accused had met with 8 other people talking about the deaths of Muslims overseas. He explains how disturbed he was by him and that he had reported it to his elders but did not report the incident to police at the time. 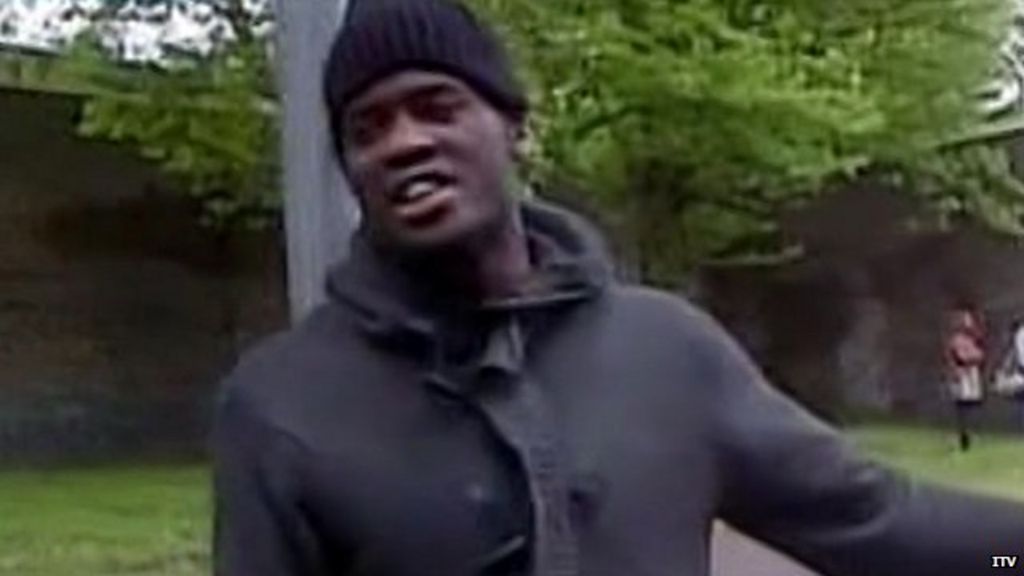 A man who says he met one of the attackers two weeks ago tells BBC London 94.9 he was so disturbed by his views he thought of going to the police.

After germany and the netherlands, i see this as being britans excuse to back away from multiculturalism. Which to a certain extent i would agree with.

That story is fucking nuts. Death by machete?..sheesh. Reminds me of that ear-scene in Reservoir Dogs.

That story is fucking nuts. Death by machete?..sheesh. Reminds me of that ear-scene in Reservoir Dogs.

They hit him with the car, it likely he was dead or unconscious when they started attacking him with the machete.