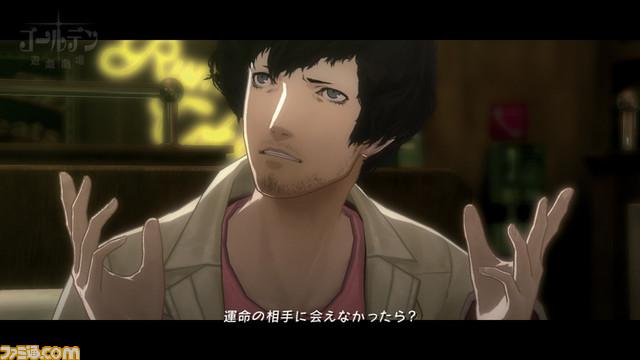 As detailed below, Catherine is the first HD game from Atlus. It’s being made with key members of the Persona staff. Included in the staff list are Katsura Hashino as producer and director, Shigenori Soejima as character designer, and Shouji Meguro as sound composer.

While the game’s name is Catherine, the main character is actually a 32-year-old salaryman named Vincent (voiced by Koichi Yamadera). Catherine (voiced by Miyuki Sawashiro) is a stylish 22-year-old girl who apparently has the charms of a young girl.

The game begins when Vincent, a vegetarian who has no ambition in work or love (I’m not sure if he’s literally a “vegetarian,” or if the term “vegetarian” is some sort of metaphor for his personality) runs into the mysterious Catherine one day. At night, he has nightmares.

The nightmares serve as an action component for the game. Set in a world with an unending stairway, Vincent has to make it to the top of the stairs, or he will not be able to awaken.

Based off Game Jouhou’s summary, it’s a bit unclear how the game will progress. However, it does seem that even during the nightmare action parts, you’ll end up working through the story and encountering events.

During a staff interview, Hashino said that as their first HD game, rather than trying out a true RPG, the team was excited about trying out something new. It looks like Catherine will be just that, as Hashino said it will be more adult oriented than past titles from the team. It’s not all style, though. Hashino promised a deep play experience with plenty of gameplay for players to sink their teeth into.

Soejima said that there are some shockingly adult scenes in the game. When you play these scenes, they’ll be even more stimulating, although in a difference sense.

Meguro also made a comment that has Persona fans excited. He said that due to Catherine, he believes for the time being the staff won’t be asked about their next title. However, at some point next year, perhaps he’ll be able to respond “Regarding the RPG, Hashino and I are…” I’m so excited about this game. I love SMT and it’s spin-offs but I’m not one of those fans that needs Persona 24/7. I can hold off on the next Persona so this is an interesting turn of events in my favor. Atlus never dissapoints me with their stories, so I’m wondering what they’ll do for this one.

Even though this game will most likely have nothing to do with Persona you have to wonder if it might since this guy was in P3P. Will this be in the same universe or in a parallel one like what they did with SMT: If… and Persona 1?

Even though I’ve never finished one, I LOVE the SMT games (never played any Persona, though! ><), but haven’t played any other Atlus titles. Judging from the screens though, this is in keeping with Atlus/SMT’s very distinctive artstyle, which makes me happy.

I have high hopes for this!

Asian sex game what a twist!

Asian sex game what a twist!

Bout time. Us console people have been ignored for far too long!shakes fist

Oooh nice ti- I mean pizza on the last pic. This should be interesting.

Any more solid impressions of how the game is going to play?

I’ve liked Atlus products, particularly their darker games (ala Nocturne and DDS, of those I’ve played) so a more adult theme is better. However, I am a wuss, so more horror-themed might be a bit much for me. I could probably handle it if it’s just themed that way, but full on horror would be tough…

Huh, so this explains that mystery man at Club Escapade in P3P.

I anticipate this will be like most other Atlus games: promising in concept, disappointing in delivery, and with a terrible synth soundtrack people will call amazing despite not knowing the first thing about good music.

If Dr. B’s a character this is a day one purchase. He’d make that gross cheese-pizza eating chick look… passable?

Any more solid impressions of how the game is going to play?

Too weird my friend. At least, going by this trailer though.

Looks interesting and I like the way the general storyline points given out so far sound. Hopefully, it’s more horror and less overt sexuality. Not that sexuality is inherently bad, it’s just that the pizza ad reminded me of every ‘game with a sexy girl character’ magazine ad from the late 90s. xd

She’ll kick your ass then break your heart.
-smh-

From what I got, it’s a game about sex, but if you have sex you fight sheep/become sheep.

GAME OF THE YEARS ALL? YEARS

Can’t wait. Even if the gameplay is horrible, I have faith in them to tell an interesting story.

Joking aside, I’ll be keeping an eye on this game. Sounds like there will be lots of humor despite the promise of having horror in it.

Let’s hope this is a foreshadowing of Persona 5 multi-platform.

Damn, that trailer was pretty trippy. I guess I’ll keep this game under my radar. It’s like Basic Instinct meets Atlus.

So every time he fucks this breezy, he turns into a goat/sheep, strips to his polka-dotted boxers, and enters a trippy ass dream world?

Japan making a game that they say is about one thing but is really about tits.