Hi. I have an EMS USB2 adapter and an old Dual Shock 2 for playing fighting games on my PC, but I rather dislike its d-pad. I don’t know if it has to do with the fact my hands aren’t as small as they used to be some twelve years ago (random thought). Perhaps an Snes d-pad would make me more satisfied, but it’s not really practical to cling to this idea.

Well, I created this thread here to ask you for opinions on good PS2 gamepad controllers. I should probably elaborate a little on what troubles me: while I can perform all of Ryu and Ken’s special moves and super combos with great ease (SFA3, CvS2), things get ugly when I wanna perform, say, Gouki’s Messatsu Gou Hadou (HCB x2 + P) or Geese’s Raising Storm in a second or less - there’s a good chance I’ll screw up. It obviously sucks a lot when you don’t find yourself in control of your own actions in a good match.

I intend to use the new controller both on the PS2 and the PC (using my adapter, if necessary). Once upon a time I got curious and bought an Arcade controller reasonably similar to this (mine’s all white, with blue and yellow buttons). While I find the button placement preferrable to the Dual Shock’s, I’m horrible with a stick - hell, I even tried using the Dual Shock’s d-pad with my left hand and the Arcade buttons with the other, and it felt like a good idea (:wgrin:). Always bound by the move constraints I described though.

So, what are your thoughts on this? Thanks!

Saturn Ps2 pad…if you can find it…

Yeah, the d-pad on the Dual Shock 2 is awful for fighting games (It’s pressure sensitive so it feels completely different from the original d-pad on older models).

Anyway, from my experience, a Dual Shock PSone controller works really nice for me. I just recently bought a brand new PSX pad as well, but it’s hard for me to do DPM or QCF motions on it, it’s probably 'cause it’s new, though.

This guy has new PSX pads for sale, pretty rare considering how old that system is… I jumped on that as soon as I saw it.

Hmm… On a side note, for a time I was considering buying an Xbox 360 controller (wired), at least for playing on the PC, but some days ago I read its d-pad is its one big letdown… :\

Yeah, definitely DON’T get a 360 controller for fighters.

I looked it up on Amazon, 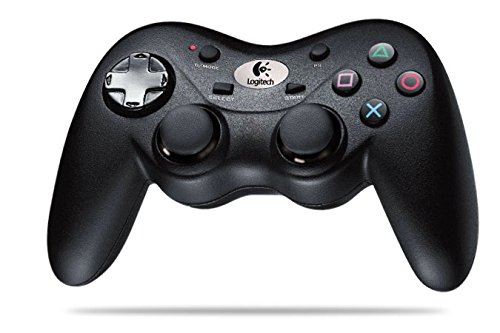 The Cordless Precision controller uses reliable RF technology for precise game control from up to 30 feet away. The dedicated PS button lets you access your PlayStation 3 menu system from across the r ...

Hmmm. Those are reviews from people who bought it as a PS3 controller. Complaints about not having “six axis”… Nothing to do with 2D fighting.

BTW, what happened to all the people who visit the Shoryuken forums? o.o

I have the PS2 version of the controller and can say I like using it for fighters over the stock PS2 controller. No lag that I’ve noticed, the buttons are responsive, the d-pad is good. (if you’re prone to blisters like a buddy of mine this controller is much easier on your thumb) I’d very much recommend it. (Can’t use it at tournies since it’s wireless being the only drawback.)

The battery life is good too, and unlike say the wavebird, the controller turns itself off when not in use. I can’t tell you how many times I’ve forgotten to turn a wavebird off. (Though I’m a bit forgetful at times.)

Why is using wireless controllers not allowed at tournies…?

Probably because if multiple people brought wireless controllers, there is to much potential that someone good be on the same channel/frequency as someone else.

i too need a good fighting game pad for ps2 the regular dualshock 2 sucks for fighitng games:annoy:

I would personally get used to a stick. If you’re serious about the fighting games, stick is the way to go. It reads more frames per second and once you get used to it, it is far superior. I was a pad warrior for a long time, but when trying to get split second DP’s into the middle of the combo wasn’t working for me, I switched to stick.

gamestop sells bobo 360 controllers that have pretty good d-pads. they have this partially-exposed packaging that you can feel the dpad itself through, you may want to check those out.

I would personally get used to a stick. If you’re serious about the fighting games, stick is the way to go. It reads more frames per second and once you get used to it, it is far superior. I was a pad warrior for a long time, but when trying to get split second DP’s into the middle of the combo wasn’t working for me, I switched to stick.

This is the truth. Arcade sticks are superior to pads. PS2 pads especially are really inadiquate for playing Street Fighter seriously. The quest for most is getting an arcade stick at home. I’d say that if you already have one, learn to use it.

That being said, the Saturn pads really were quite good for Street Fighter. It’s still not an arcade experience and you’re stuck with having to use shoulder buttons to used PPP or KKK, but other than that they were quite nice. Six buttons on the face is simply required.

There is a Saturn pad for PS2 out there, but only small quantities were produced. They are pretty hard to get a hold of and rather expensive these days.

For the price of a Saturn PS2 pad you can get a T5 stick and for maybe $20-30 more you can get a SFAC or MAS stick. You might not like sticks right now but get one and once you get used to it see if you really want to go back to pads. And if for some reason you still don’t like sticks, the good ones tend to hold value pretty well and you can easily sell it for almost what you payed for, and who knows, maybe even more.

If you just want something for casual use (which it sounds like you do) there is no reason to spend $60-70 on a pad. This will be an unpopular suggestion, but if you really only want to use a pad try the SFAC pads. Yes, they are not as good as the Saturn PS2 ones, but you can get them on EBay for a little more than $10 shipped.

While I consider myself above average (as in I’m better than everyone I know in person, which doesn’t say that much, and I’m better than most brazilian players I’ve met on Kaillera) in SFA3, I certainly don’t dare putting myself near the top (I can’t do custom combos right, so no V-ISM). I do care about playing as best as I possibly can, but I go long periods of time without practicing, and it’s not common for me to improve in a way I can notice when I play. More than a few times I wished I could’ve had a “tutor” (for the lack of a better term, lol) to make me get better, throughout the years.

On a side note, I’ve never even learned how to hold an Arcade stick properly; I have near-zero Arcade experience (but, hey, I’ve beaten people who don’t, so I’m not abysmal). I do recognize the value of having the buttons (especially the six standard ones) more easily accessible, which is why I tried that crazy setup using my Dual Shock 2 with my left hand just for the d-pad and having my (probably not very good - I simply don’t have the knowledge to assess that) Arcade controller on my lap so I can press its buttons with my right hand. Yeah, it’s bizarre.

Oh I didn’t notice that you are from Brazil. I think that will vastly limit your options because I remember people saying there are little options out there and getting things shipped over there will be very costly.

On a side note, I’ve never even learned how to hold an Arcade stick properly

There really isn’t a right or wrong way. It depends on comfort of the player.