WHERE IS ULTIMATE ALLIANCE 2?
God they made that game fun. Although I still remember when XMen Legends 2 came out and I played it with my friends for about 12 hours straight.

And I also have very high hopes for the new Hulk game.
Seems to be something to the tune of Ultimate Destruction 2, which was basically the best super hero game ever.

Iron Man game? Don’t see anything special regarding it. If I want to use Iron Man, I’ll play this… 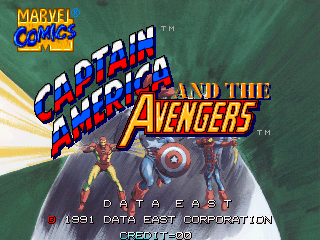 As far as comic video games go, the best I played so far was Ultimate Spider Man. Story was great plus it was cannon with a few kinks to be worked out in the USM series. And the feel of webslinging with spidey and jumping over buildings all hulk style with Venom was too cool. I also liked seeing sable falling out of a plane with venom, smacking him around in Mid air, the poping a cap in his head thru his mouth!

My favorite comics videogame is MvC2, by a long shot… I liked those X-Men Legends and Ultimate Alliance games, but only when playing with a group of buddies in the same room. It ain’t the same playing solo or even online.

i did enjoy seperation anxiety and the old punisher sidescroller too
but man… do licensed comic movie games suck, i bought batman begins for 10 bucks and beat it in one day so i could unlock all the costumes

it was pretty fun though

Spider-Man vs. The Kingpin for the Genesis was great. A little too reliant on the webs and not enough on hand to hand combat, but it was still the best Spidey game in its day.

Oh yeah, and Capcom’s shit… MvC1 probably remains my favorite. I never was that into MvC2.

Yeah MvC for me, though I’m a scrub at any Vs game.

I actually really enjoyed Xmen Legends 2, and when I had my Atari back in the day I had the Spider-man game as well for it

Loved all of the Capcom fighters but I’m partial to X-Men vs. Street Fighter since it was the first of it’s kind, the first true fighting game crossover. It even made the Guiness Book of World Records, MVC2 also.

The Architectural Inspirations Behind Wakanda in Marvel Studios' 'Black Panther'

A mix of traditional and futuristic elements shaped this special place in the Marvel Universe.

The worst Marvel game has to be Spider-Man and the X-Men. Man it’s so bad it’s hilarious. I can still remember the crappy music, so bad you can’t forget it! And LOL at the moment you find out that the boss Wolverine fights is supposed to be Apocalypse when he looks like and someone had the bright idea of making Spider-Man fight Nastir’h alone, even if he was just a Murderworld robot, looooord… :lol:

I enjoyed the first Spider-Man game Activision did, a really early one that was largely based on the 90s carttoon. The final boss was Doctor Octopus wearing the Carnage symbiote. LOL at Daredevil being invited to Marvel’s Annual Poker game.

And the reggae mix of Spidey’s 60s cartoon song at the end - “Him a man him a man him a Spider-Man him a do whatever a Spider can!”

Marvel Ultimate Alliance is really cool. Playing Pitfall with Deadpool, Spider-Man, or whoever else is a serious trip. Deadpool was really funny in the game too. :woot:

Aside from Marvel, Capcom’s Spawn in the Demon’s Hand and Heavy Metal Geomatrix are some really cool gems for Dreamcast owners. :tup:

I wish DC had some better video games. I remember the first Batman side scroller, damn it was freaking hard and the last level involved a lot of IMPOSSIBLE jumps! The game was based on the first Tim Burton movie yet it was all about Batman fighting robots until he met the Joker at the end! Like, what movie did they watch? :looney: Still, the music was excellent! :rock:

Prior to that, I have fond memories of a Superman arcade that was two players. One Superman was regular Superman, the other guy was a red Superman. We all called him Shazaam even if he wasn’t Shazaam. I think this is the first pallette swap ever.

Recent DC games like Teen Titans and Justice League Heroes are okay at best but fall a bit short of being great games. However when the Lego Batman game comes out I think that will be DC’s first great video game. :rock:

Oh yeah, about the new Hulk video game - There’s an SRKer working on that game. I forget who exactly though, I’ll look it up when I get a chance. :karate:

and looking back, there was soo many random sidescrollers
im still wondering why the spiderman game had namor and hawkeye, but moreso why namor shot eletricity, i guess thats asking why wolverine shot sonic booms and juggs had an RPG in the xmen game

my 2 favourite xmen games for consoles had to definitely be xmen 2 clone wars though, they just made that game too wicked, nothing complicated, just a life bar and a charge up meter for special moves

as wellll, the game that first got me putting in QCF motions and such was xmen mutant apocalypse for snes, man that game was rad
so many wicked combos involving fighting game motions, i wish they had made a second one

I still have my Mutant Apocalypse cartridge haha, and this reminded me I used to play the hell out of the Spider-man Sinister Six game for NES when my grandma still had that

Some good games to get are Ult. Spider-man, though it is a bit on the short side.
Incredible Hulk:UD fun as hell.
The Punisher not the arcade version, the Garth Ennis written one.
Marvel:UA and the X-men legends games.

And of course Mahvel baybee!

Yeah SRK member Jedi W. is working on the movie based Hulk game for the DS.

…I’m actually working on the DS game for this…

…that’s pretty much all I can say…

I’m surprised no one has mentioned Spider-Man: Maximum Carnage for the SNES and Sega Genesis. It was one of the first Spider-Man video games I ever played.

The sequel was godawful though.

I’m surprised no one has mentioned Spider-Man: Maximum Carnage for the SNES and Sega Genesis. It was one of the first Spider-Man video games I ever played,

I was just about to come in here and post about that game haha, good shit. Friends and I are currently playing X-Men Legends II, the game is awesome but incredibly easy, hoping Apocalypse fight is good.

As far as comic video games go, the best I played so far was Ultimate Spider Man. Story was great plus it was cannon with a few kinks to be worked out in the USM series. And the feel of webslinging with spidey and jumping over buildings all hulk style with Venom was too cool. I also liked seeing sable falling out of a plane with venom, smacking him around in Mid air, the poping a cap in his head thru his mouth!

Beat me to it. This game is great. I’ve read all of USM so far and its nice seeing what happens to Venom. The boss fights were cool, but i hated the chase/race missions. It’s also short.

And you even fight Ultimate Rhino, who’s like a million times cooler than his old self. You only see him for maybe 3 panels in the actual comic and nothing more.

Other than that, the only other good comic games I’ve played are the Vs series and Spiderman vs Kingpin on genesis :wasted:

I can’t believe no one’s mentioned War of the Gems for SNES yet, that game was badass. The Magus’ theme is the highpoint of video game music, obviously. You can download it here.

LOL no offense but I never could stand “I can’t believe / I’m suprised no one’s mentioned blah blah blah” posts on threads. You’d think there was only 10 video games based on comics for crying out loud. Once you mention it, it’s mentioned, problem solved…

I personally thought War of the Gems was pretty bad

LOL no offense but I never could stand “I can’t believe / I’m suprised no one’s mentioned blah blah blah” posts on threads. You’d think there was only 10 video games based on comics for crying out loud. Once you mention it, it’s mentioned, problem solved…

It was more of a sarcastic remark, War of the Gems is hardly notable.

uh? it says marvel was the first tag team fighting game…doesnt king of fighters predate that with the striker system.