Hi guys. Newbie forum user techjango here. We’re a start-up based in Austin, Texas focusing on OSHW & DIY products and services. We recently launched a kickstarter campaign to fund our Darkmatter project and thought that the users at this forum might be interested.

Darkmatter is an Xbox 360 (*) Laptop Kit that you can use to convert your Xbox 360 into a portable gaming system replete with HD widescreen display, capacitive touch controls, USB ports and more. The project initially started simply as an effort to make a portable Xbox 360 system for ourselves, inspired by famed electronics hacker Ben Heck - he’s made one-off mods in the past, and continues to do special orders at around $5000. We were pretty happy once we completed our own personal little mod, it was a fun learning experience (there were some frustrating points in the path, but all in all it was a good experience). Racking up the costs, they turned out to be much less than $5000, and we thought, “Why not make more of these, for other people?”. It’s much cheaper to make, you learn a lot about soldering and electronics and such through the process, it allows you to play games in a small private setting and it’s great for LAN parties. And so we named our little boy ‘Darkmatter’ and decided to crowd-fund it with kickstarter. Here it is: 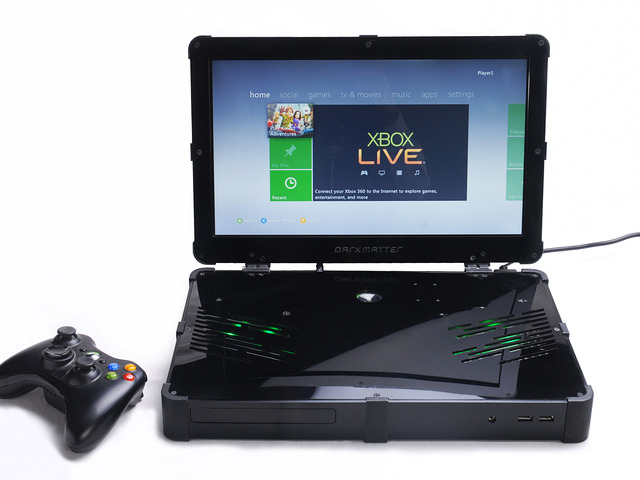 We’re still short of our funding goal, and would love to bring this product into the gaming and DIY/hacker community’s hands. If you find this project interesting, please do help fund this on our kickstarter: www.kickstarter.com/projects/1360501894/darkmatter-xbox-laptop-and-diy-kit. We have reward levels all the way from $10 pledges (name-listing on website and a vote on color options) to $999 (fully assembled and tested Darkmatter Xbox Laptop, a how-to eBook and a skill badge)

We demo’ed Darkmatter recently at the Bay Area Maker Faire and got a very positive response. Ben Heck himself stopped by! 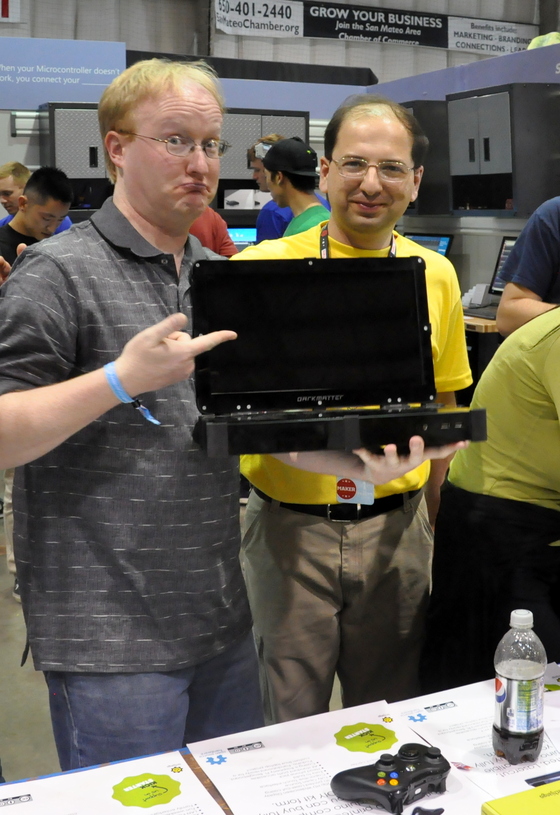 We do hope our cause (and Ben Heck’s approval!) will convince you to support us. We’ve already been covered in prominent tech websites such as mashable and engadget but are still short of our funding goal. Help us bring this to you! Share around and pledge! We’ll be releasing all our design files once the kickstarter is funded, so you can go make your very own mod!

We’d love to hear your questions, comments and feedback. Feel free to leave them right here on this thread, or check out our kickstarter for common queries and updates on the project. Thanks for reading!

[Re-posted from the official Arduino forums]

Very cool! As long as that display is sub 1 frame of lag, then tournament organizers could get a bunch of these and run tournaments without having to drag along additional displays, power cables, video cables, and so on.

Very cool! As long as that display is sub 1 frame of lag, then tournament organizers could get a bunch of these and run tournaments without having to drag along additional displays, power cables, video cables, and so on.

Thanks! With a little more than 1 day to go, we’re 95% to completing funding goal! Just need 1 grand more. Talk about tense!

There’s a whole wealth of information and questions on our kickstarter, do check it out. And please share & pledge, can’t wait to get this out. Thanks. : )

Someone test the lag on it… if it passes, it could be useful for tournaments, or just BYOC areas.

Neat project, and congratulations on meeting your goal! Question though, why use a *duino to deal with touch rather than a touch IC?