Are you good at multiple fighting games or want an excuse to change that? D?Avino?s Pizza in Dutch Square Mall in Columbia will be running a fighting game circuit!

The Digital Slugfest Fighting Tournament Circuit is a series of 6 events (roughly one per month but maybe more) where a winner is determined by total number of points earned by the end of the “season” (the series of events).

The circuit will utilize a points system where every round that you win in any game will give you a point. It was discussed and using rounds instead of matches gives the most potential for comebacks if you fare badly in an event or two. Even if you lose a match you can still get points for winning a round in the match. At the end of the circuit season in 6 months time the winners will recieve big prizes (to be determined, but 100% of all fees collected go toward prizes and pot size will be made available for all to see).

Here are the events scheduled so far:

All tournaments are using the Playstation 3.
The only reason for this being that it is far easier to switch between controllers and joysticks. The last tournament we held using the 360 version it was a hassle to switch them.

Bring your own controller or joystick:

360 players don?t let the fact that it is using PS3 keep you from coming. Please come join the fun. We have sticks you can use for your matches and we?re looking into buying a MadCatz SF4 Fightpad for PS3 for the players who use the 360 controller as they are similar.

The first D?Avino?s Pizza tourney was free. However, this tourney series will have fees.

Paying Per-Event:
The fee is $10 per event which lets you play both games or, if you just want to play a single game (ie not taking part in the circuit but want to play in the tourney) it?s $5.

Circuit Subscription (Save money!!):
There is also an option to buy a ?subscription? to the circuit. If you pay $40 before the circuit begins on September 12, you get entry into both games in all events in the circuit. So if you pay ahead of time, you save $20! Paying separately would cost $60 ($10 per event, 6 events). If you are seriously into the idea of taking part in something like this, an option like this is in your favor!!

100% of fees collected will be for prizes (this is not for profit). The prize structure is still being discussed (still deciding whether to utilize 100% of it for a huge prize at the end of the season or to use a portion of it to give small prize payouts at every event but still reserve the bulk of it for a large final prize).

This is great for Columbia tourney players! We now have 6 new tourneys scheduled for the next 6 months (at least) and the circuit points race makes it even more interesting!! Are you ready to test your fighting skills? Prepare for the Digital Slugfest!!

This series is a new format for everybody involved and is still evolving. If you have ideas or comments, please leave comments here and let the organizers at D?Avinos hear you!

Also be sure to visit the SC Tourney Blog for more information on this and other tourneys at: 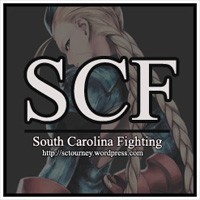 One stop news and info on the South Carolina fighting game tournament scene.

I’ll try to make as many of these as I can. Will these be double elim?

One thing though: UFC? Really?