End of an Era - The Iraq War is Over 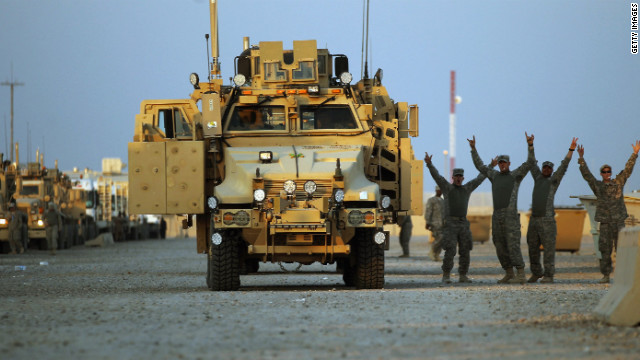 The last troops have been pulled out, ending almost 9 years of conflict in Mesopotamia.

For most of us, the Iraq war was the defining conflict of the generation, a polarizing topic and a focal point for political discontent.

Some of us fought there. Many more of us know someone who did. And maybe a few of us have lost someone we once knew to the sands of Iraq.

Obama promised to end the war, and he has.

What are your thoughts now? Is this a precipitous move? Or is this the right decision, too long in the coming?

Well, where were we going to get troops to send next door, if not withdrawn from there?

The Mid-West isn’t pumping out enough babies for the U.S. to have enough patriots to cover all the oil fields.

Hopefully we won’t vote Obama back into office.

The Mid-West isn’t pumping out enough babies for the U.S. to have enough patriots to cover all the oil fields.

Don’t blame me. I’m doing my part in the south. Bitches stay on my dick like it’s a turd and they’re Million.

Hopefully we won’t vote Obama back into office.

You think there are better candidates running?

Don’t blame me. I’m doing my part in the south. Bitches stay on my dick like it’s a turd and they’re Million.

Or broke yo’ dick off trying.

Or broke yo’ dick off trying.

Unfortunately, this plan doesn’t work for me.

I like my women so skinny that, whenever they break wind, they get hungry.

I am such a mark for Trojan.

Yeah but it shouldn’t hard for them to remember the only guy who’s ever fucked them sober and/or not at gunpoint.

Now hopefully we can spend more money on keeping U.S. citizens alive rather than on killing foreigners.

the real question is…

was the iraq war a success or a failure for america?

the real question is…

was the iraq war a success or a failure for america?

If the former, then the Iraq War was well beyond failure, and fell within the parameters of treason.

If the latter, then the Iraq War was a stunning, colossal success.

But the term “America” would have to have to have undergone a huge semantic shift away from the Constitution for the latter to be the case.

So it was a failure for America, a success for the traitors in the oligarchy which has usurped the U.S.

As an Iraq War Veteran I am glad it is over. They did not want us there but it is a fallacy to say they never wanted us there. They wanted us there long enough to get Saddam out, then they wanted us to leave. Iraq is still going to have a civil war regardless of how long we would have stayed.

You think there are better candidates running?

Any time I think about this war I get sad and angry. That’s all i have for this thing. Sadness and anger.

Republicans wont nominate Ron Paul. And if you watched the last debate, you would realize that the other candidates are bunch war mongering psychopaths.

In a lot of ways Ron Paul is exactly what the U.S. needs and a much better candidate than Obama by far however, fundamentally he values state rights above civil rights and personal freedoms so Obama again may be the lesser of two evils.

On to the next war.

B) http://www.reuters.com/article/2009/12/13/us-iraq-usa-oil-idUSTRE5BB18Q20091213
http://www.youtube.com/watch?feature=player_detailpage&v=nbeRTEv7AUE#t=406s
etc. We are still somewhat too close to the Iraq War to be dispassionate about it, which is both appropriate and unfortunate. There were so many anti-Bush-administration feelings which were prevalent than and to some degree still exist, that it will have to be left to a future generation who is unbiased by anything but facts and results to gauge the successes and failures of the war.

My personal opinion is that I’m glad Saddam etc are out of power, though if it had to be fought, maybe it should have been fought in ten years ago when Hussein invaded Kuwait- though if I had to guess I would say that the efforts after the war would have been horribly mismanaged, because there may not have been the same public/political will to establish Iraq as a democratic state.

Bullet points:
[LIST]
[]Wish it hadn’t happened, but maybe it had to;
[]Iraq and the world will be better places; America I’m not so sure about;
[]Cautiously optimistic about the future of Iraq in the short term;
[]Pessimistic about the care of returning American soldiers, particularly with regards to treatment of PTSD.
[*]Mission accomplished, to whatever extent possible.
[/LIST]

KAL’s take on it: 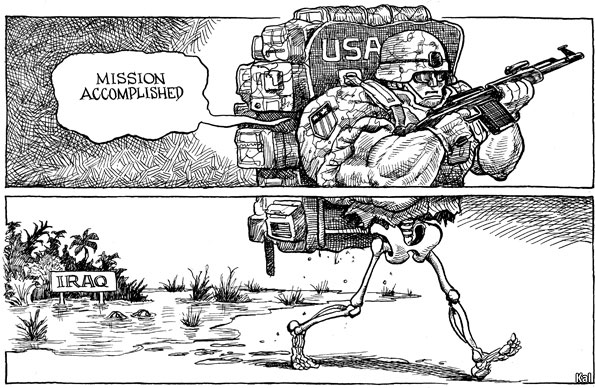 I feel for the soldiers. I don’t even start about what it must be for them. It’s fucked. The government does its best but their initiatives are skin deep.

Americans love praising their returning soldiers, but who’s gona pay for them if they get stuck have issues adapting from military to civilian life?

Every guy I have known who served in the military for the last 5-10 years has it way better than 90% of the people who stayed. They have training, insane military benefits, took advantage of the crazy army home loans, and unlike the rest of us, received a free education and will retire in ten years and have better paying career opportunities in their 40’s due to their military experience while we most likely will fight to keep our jobs.

One guy went on to become a medic, 9-10 years in he;s making 65k a year, has ridiculous benefits, a four bedroom home he rents out for 50k a year in San Fran, and could quit and get a better paying job in a hospital any time he wanted. But wait, he’s going to give it another 10 years and then receive a pension for the rest of his life. Boo hoo. Joined as a grunt when he was 19, making 130k a year at 27. I feel for the guys who were injured, but unless they were stupid not to take advantage of anything they have an edge on civilian guys if you ask me

Hell, even the stupid ones I know that did basic skilled work have offers from private companies to make $150k every 6 months to work for them in the middle east. The die hard combat guys who left the military can make even more than that working for defense contractors.