If you’re a 3s fan, would it be cash-better-spent going to Japan or something instead of Evo?

It was EVO first for me. Had never been to a big event like that or visited Vegas and it was more affordable than Japan to the point of actually being possible. Met a bunch of cool 3s heads and made some connections. Good trip, well worth the investment.

Would have been Japan first though if I had three times the money.

If you’re a 3s fan, would it be cash-better-spent going to Japan instead of Evo?

oh oh oh also I challenge pherai to akuma mirrors
EDIT: AND IN THE SPIRIT OF BEING MEAN SPIRITED I CHALLENGE YOU BECAUSE YOU ARE A BIG DUMMY… ROFL BRB LEARNING SA2 FOR TRUE GOU SHORYU MADNESS LOL…

um this is real life.

um this is real life dummie. Do I need to include that in the tread title? Lol

I know. I can’t wait for the introduction of a rage quit LIVE! lmao
Seriously though, learn some yoga before he whips your ass!

You sound about as big a dork as the adamantium guy.

That Kuroda stuff didn’t stick, and you probably didn’t buy niconico premium and figure out how to watch a few days later now, but that’s okay you can watch whatever gets uploaded to youtube for us gaijin when we can’t understand half of it anyway, not just talking about the language barrier.

In this example you stepped into, again without knowing about the game:

ryan = Kuroda (for all intents and purposes)

what is the point of making a public challenge if you are not going to record or stream it for the public? No record/Stream No Point.

actually a 1993er here, but your ok with your stale and insipid insults. Point being person A makes a challenge on the internet. if the matches take place I am interested in seeing the results. Anyone bold enough to make a challenge should be brave enough to let someone record and post the resuts. Unless you are a big pussy and are afraid that, if you lose, your loss will be online for everyone to see. Of course if it isn’t published and you lose then you can always blame your loss on something else rather than your opponent has more skill than you. Publish the matches, sissy!

Did he really think 5 year olds are on these boards? LOL way to inhale a ball of ‘literal’

BTW that was already posted (we didn’t care the first time) but nobody posted Kuroda was watching Ryan’s match and went from 4000 WPM to 0 words and Pierrot had to handle saying anything about the match on screen.

not even a sosososo, daisukedo. Kuroda trollin. He’s the master of that too.

Something about gootecks then… there was this guy on cutthroat kitchen who looked like gootecks. Complete with red slacks. Remy style.

Did he really think 5 year olds are on these boards? LOL way to inhale a ball of ‘literal’

“Place your bets” require a bet placement. Its on the board now you can’t take it off or move it around.

Ask me anymore questions for clarification. As I was gambling with not 1 but 2 japanese women last year at EVO. They were betting pretty weird! Stacks of money though.

Yeah, so, you know. “Put your Money where your mouth is.”

& don’t sit there and eat your money behind the computer screen.

Rage mail episodes, lol. Did my toilet baby comment make it after I beat him?

Don’t respond to that Mitchio_Kakku guy. He is too afraid to post on his real account and made a shitty “troll” account for stupid ass comments. I guess he found his way to the 3S forums…

I challenge the entirety of the GGPO community. I will MM any of you at Evo for up to $50 a pop. When I play online I play at 35% strength. Time to show you all my true power.

Stipulation is winner has to buy a 30 pack of budlight.

You dodged playing me: fact
Several people, including myself, disliked your opinion in that one youtube video: fact

There’s no personal animosity, just those 2 facts alone at the time skewered a distaste for you. We’ve met briefly, and barely communicate, but if I were in NY id hit you up to play 3rd and hang out.

on the other hand, justin beiber, and agumon (ggpo low lifes) are fucking scum. i wouldnt even acknowledge them in person lol
that screenshot is probably from one of the two of them, who try to troll me cause they have nothing better to do with their lives which is unfortunate for all of us ha 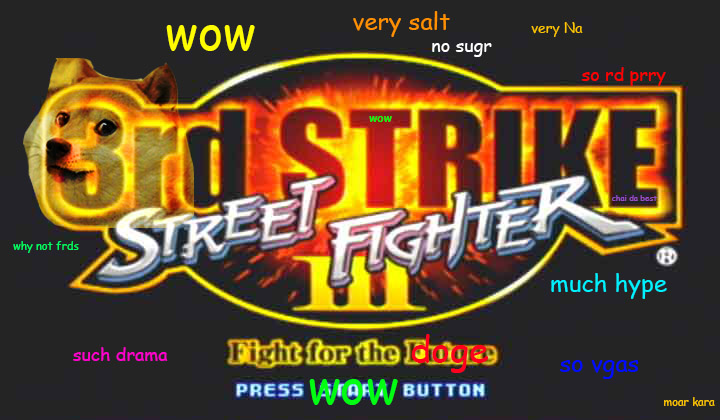 I don’t know what that picture is but every so often I watch this to put things in perspective.