I’m thinking of hosting an oldschool games tournament in the future, and I want your guys’ input.

Would you go? What games do you want to see? etc.

Would any of these be too unpopular (like only 4 people would show up)? Is there a specific oldschool game you would love to play that I didn’t mention (UMK3/Kizuna Encounter/Asura Blade/Waku7/SamSho/Last Blade maybe)?

I’m not expecting 64 people or anything, I’m just curious if any of you would be interested in participating. 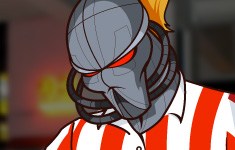 Service With A Smile

The customer is always right. So he gave it to him. Where's Killer Instinct III? Seriously. Releasing this title on the Xbox 360 makes even more sense than ...

About VS:
It’s been awhile so I need a bit of reminding.

The console version has all characters.

Which would be the tournament one? Should we host it on console or just do VS arcade style?

About SFA:
Which would you guys rather have? A2, A3, both, or the console A3 that has more characters (I haven’t tried it out yet)?

KI seems to be pretty guaranteed in this if I hold it because we’ve already got a dedicated cabinet for it.

Edit : Kizuna Encounter and Waku Waku 7 were good too.

Edit : Kizuna Encounter and Waku Waku 7 were good too.

I don’t think we’d get enough people for games like Waku Waku 7, Kizuna Encounter, Breaker’s Revenge, Rage of the Dragons or Power Instinct Matrimelee, but it wouldn’t hurt to poke around and see who’s interested.

everyone played/plays VS1 on Turbo 3

as for console
DC: garbage its like SF:AC
PS2: apparently arcade perfect dont know if dipswitch settings have to be changed. i could get back to you on that

EDIT: personally although i love A3, A2 would probably get a bigger turn out but im for alpha either way

and for the record no one likes A3 upper or A3 double upper (the console versions)
they nerfed (i.e:fixed) alotta stuff.

everyone played/plays VS1 on Turbo 3

as for console
DC: garbage its like SF:AC
PS2: apparently arcade perfect dont know if dipswitch settings have to be changed. i could get back to you on that

Thanks for the info, I’ve got alpha anthology as well for PS2, maybe we could do both A2 and A3.

Are you suggesting a ST/A2/A3/3S/SF4 tournament

Not really. Pyron is a cool guy.

About VS:
It’s been awhile so I need a bit of reminding.

The console version has all characters.

Which would be the tournament one? Should we host it on console or just do VS arcade style?

sup with that primal rage tho, yall get down on that?

Darkstalkers 3, Street Fighter Alpha 2 and/or 3 and Killer Instinct seem to be going on the list for sure, but what’s your guys’ take on any SNK games?

Also, anybody interested in a Mortal Kombat? I haven’t kept up with the series much, but which would be better MK2 or UMK3?

About VS:
Night Warriors has the same characters VH2 has (So no BB Hood, Jedah, Lilith or Q-Bee).

If you guys are going to start practicing your Darkstalkers 3 skills, I’d recommend assuming we’ll use VS (No Donovan, Huitzil or Pyron). Unless the console version of Darkstalkers 3 is arcade perfect enough then I’ll stick to the original Vampire Savior.

I’d prefer to run it on arcade obviously, but Capcom seemed to hate the idea of the arcade version having all the characters while the Console version did.

I never thought anybody considered it to be a serious fighting game, and that’s why the sequel fell out the window.

Stay away from AoF, all of them.

How about Street Fighter II: Hyper Fighting? I think ST would actually be too popular.

anything else would be like holding a 2nd impact tourney

I’ve been hearing from a lot of people outside of the forums that they’d rather play A3 over A2. At this point it seems like A2 would be more popular, which would make it the game of choice.

Vampire Savior is still a little up in the air as to whether we’ll do console or arcade. Assume we’ll do arcade mode (Which lacks Donovan, Huitzil and Pyron).

If we’re doing Samurai Shodown, it has to be decided will we do SS2 or SS5+? I’ve heard mixed reactions for both.

I’d like 5 games, and I haven’t heard enough input for a 5th game so I wrote down MK. I think MK2 wiould be better than UMK3, but prove me wrong and we can switch it to UMK3.

I’ve come up with a name for this tournament: FLASHBACK. I finished working on a flier earlier today, I’ll post it here when I get the chance.

If this goes well, we’ll probably host this once every 2 months. We can drop the least popular game next time too (so far that seems like it would be Samurai Shodown 2) and replace it with something else.

Some games that didn’t make the cut, but have a possibility next time (or maybe even this time):

If there’s a game you really think would go well in this tournament, let me know!