So Check it out, Basically I started out like this:

and went to this:

This is the former inside with the MAS PCB. It runs Playstation and Saturn:

I wanted to use my 360 wireless controller and have it STILL work with the old MAS. To accomplish this I needed DB-25 connectors and alot of time. I did something like this:

Basically, what has to happen is the 360 has separate grounds, but it has 7 shared ground if you use the right solder points. Now, since the Playstation PCB used one ground, you need to split it to match the 360 grounds. The thing is the Playstation grounds need to be split before they go into the DB-25 on their end, the 360 of course is already split. This way when you connect the 360 or Playstation DB-25 the grounds will match up on the DB-25 which goes to all the buttons. Kinda tricky. Anyway, It now looks like this inside:

The 360 controller is mounted using Velcro in case I needed to work on it, I cut the back of the controller and formed it with a dremel. I drilled 2 holes for the battery pack and mounted that separate.

Now, I changed all the buttons to competition (convex) and swapped the joystick to a Happ competition, I think it was an ultimate before. I also added a button, well I really moved what was the yellow analog button to the bottom of the stick and used a Happ convex button for the 360 guide.

I also took the art from 4 spider-man covers and heavily modified it in Photoshop. I drew a leg for Mary Jane and the web at the bottom. I had to repaint most of it to fit around the buttons and such. The idea was to have Venom’s hand around the last button. Prior to adding the new Art I painted the MAS black.

I routed 4 holes under the art to hold the Happ stick, I didn’t want to see those 4 screws. I also covered the art with Lexan.

Thanks for all the help here, I may add a battery pack and a p360 but we will have to see.

Bravo, that’s one hell of a mod. I like what you did with your stick

So many Spider-man sticks, so few Batman ones…

I get so nostalgic when it comes to the old MAS design:sad:

you deserve a cake

great job :tup:
nice work the art is awesome too
i especially like how the buttons blend in with the art in terms of color.

so for your mod, do you have to switch the plugs on the on the db25 connectors when switching from ps2/saturn to 360? i noticed the one from the ps2/saturn looks unplugged with nothing else to go to it.

^
Thats is correct, there was not other way to do it since they don’t share a PCB.

great job :tup:
nice work the art is awesome too
i especially like how the buttons blend in with the art in terms of color.

If I told you how many hours that background took… I needed an exact template of the MAS, and it was always off a little. Then I wanted the webs to be a little see through, which they are its just hard to tell in the pic. Everytime I printed the art it was off. I had to redo it in CMYK and take it to a printer.

Jeeez look at all that wiring

I actually wish I could install some sort of DB-25 switcher like an old vga switch box this way I could just hit a switch to cross over to whatever PCB I want to use. 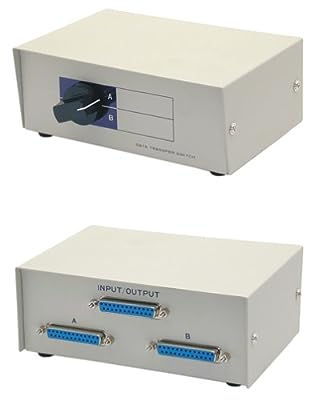 StarTech.com's Manual 2-to-1, 25-pin Switchbox lets up to 2 computers share 1 printer or modem or 1 computer share 2 printers. Requiring no power supply, this switchbox is ideal to sit on a user's des ...

Open the box and just install the switch in my Mas.

^
Thats is correct, there was not other way to do it since they don’t share a PCB.

I guess one of the reasons I did it this way was for future expansion. I really dont want to do this again

I was under the impression that the 2 PCB’s culd not have power to them at the same time or it would screw with the 360 PCB, Is that not true?

If not, how would you have done it? New know when I might get bored and simplify the wiring.

That switch box idea is a great one! I have a compact one that has been sitting around gathering dust. I will definately incorporate it into a cutom stick or mod in the future.
This is what it looks like.