New options for adding XBox One to an arcade stick have emerged this month. There are 3 new xb1 third party controllers that were released this month. Two are made by PowerA: Xbox1 Spectra ($50) and Xbo1 mini ($40). One is made by PDP: Xbox1 Rockcandy ($40)
[update 2/3/2015] Added Horipad for xb1 to the list.

I will separate the info of each controller into the next three posts. I’ll leave the first post as a summery and info for the trigger inversion. 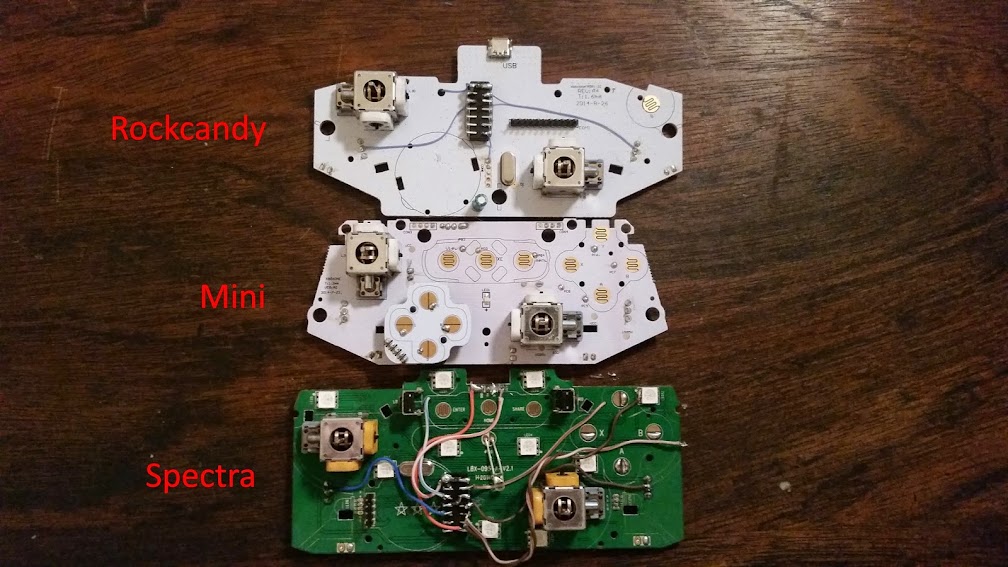 Rockcandy Pros
-Cheapest pad other than the mini.

The winner is the Horipad if you can get a hold of one as not having to do a trigger inverting is going to be more useful for most people. Otherwise its a toss up between the mini and rockcandy. Pretty much the rockcandy has a better deal if you buy it new as you get the extra lil freebies plus the onboard micro usb jack is nice too. The mini might be easier for people to solder to though.

Trigger inversion:
Since the triggers on all three pads are active high we will need to add a hex inverter to make them active low. We can reuse the same method that was used on the madcatz 360 pads that also had active high triggers. Note that in Toodle’s schematic he used the A/Y pair 1 and 2. I will be using pair 1 and 6 to make wire routing easier. 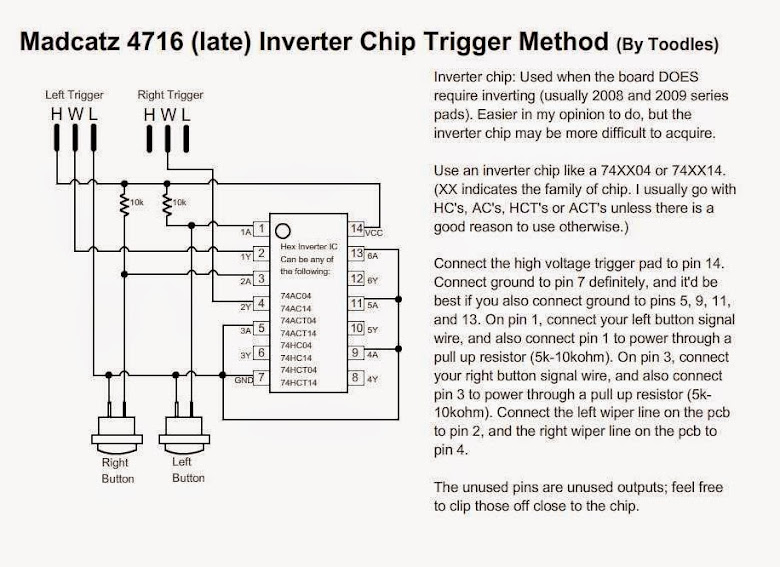 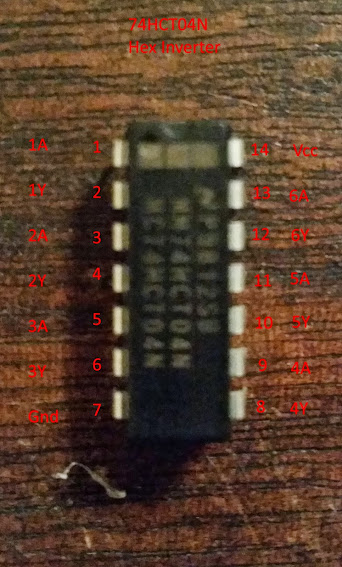 I’ll be using the dead-bug setup. Since its on its back all the pins will be flipped. It is important to remember this. 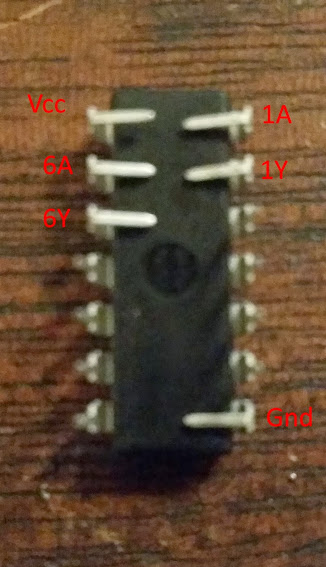 Here is an example of the 10k ohm resistors soldered to the pins. 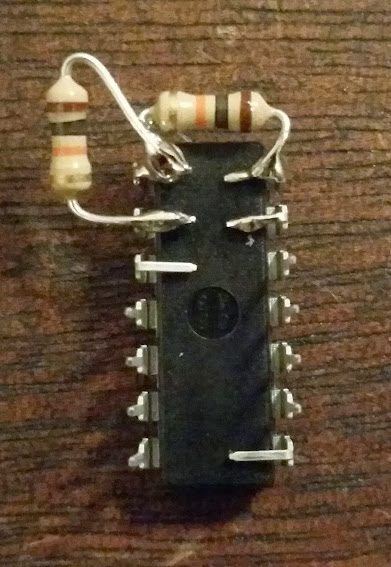 Her is an example of 10k ohm SMD resistors soldered instead. 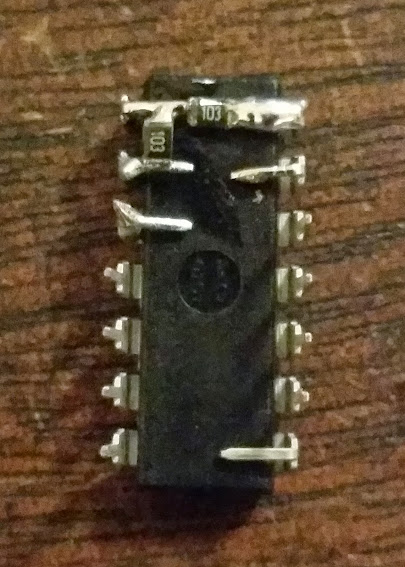 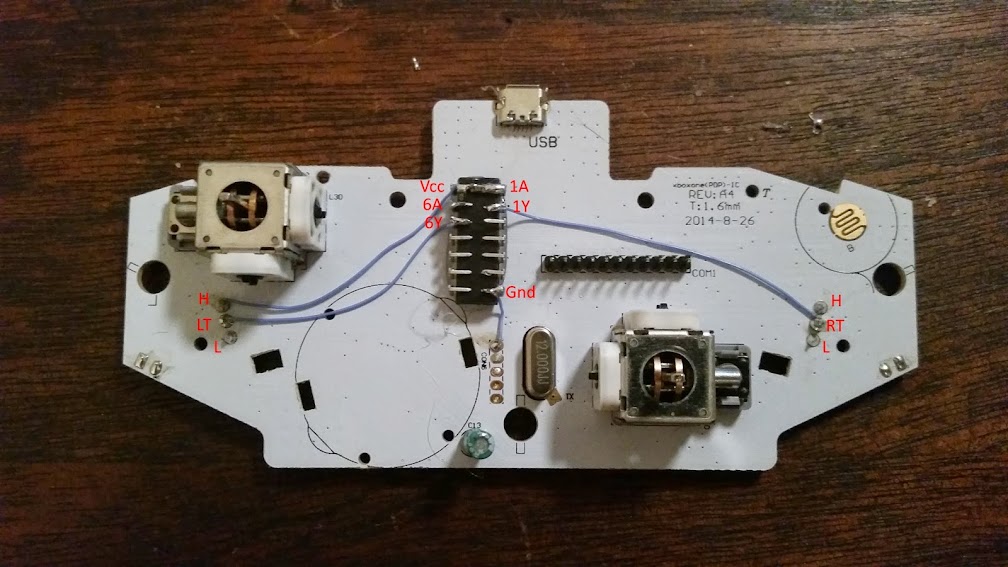 What do I need to mod a 360 TE stick to Xbox one?
A Third Party Xbox One hack for those who want LT and RT and have trouble
Xbox One PadHack Thread - Calling the goons "Toodles, Gummowned, Phreak and You" Do it for the Kids
Xbox "dead bug" failure
4 sticks running Madcatz 360 PCBs, what are my next gen option
Gummo October 31, 2014, 8:30am #2 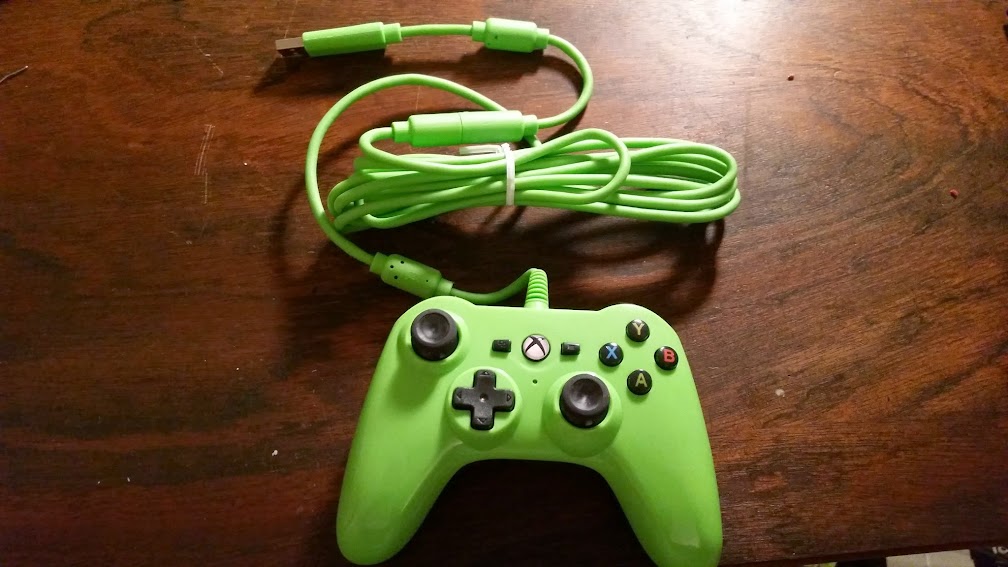 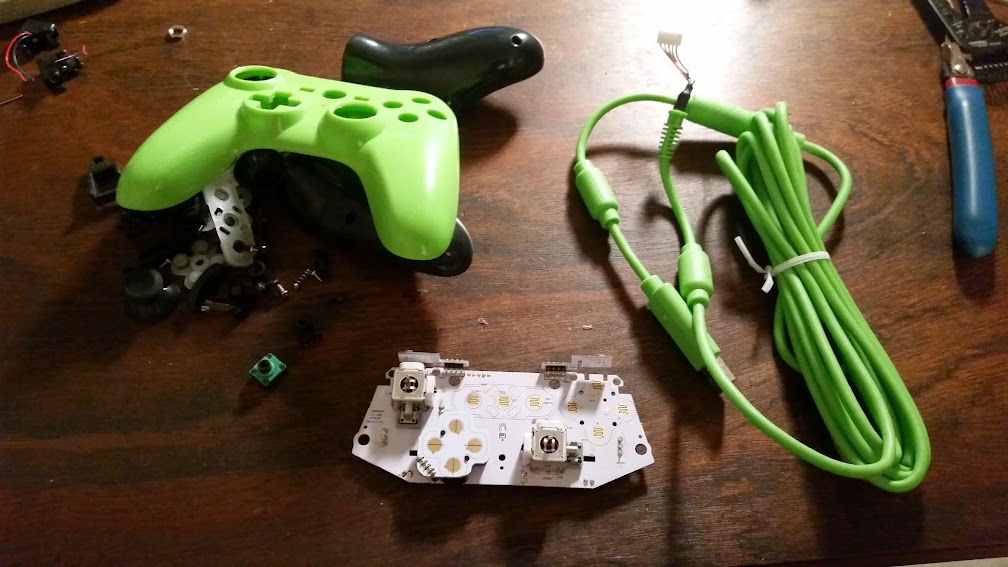 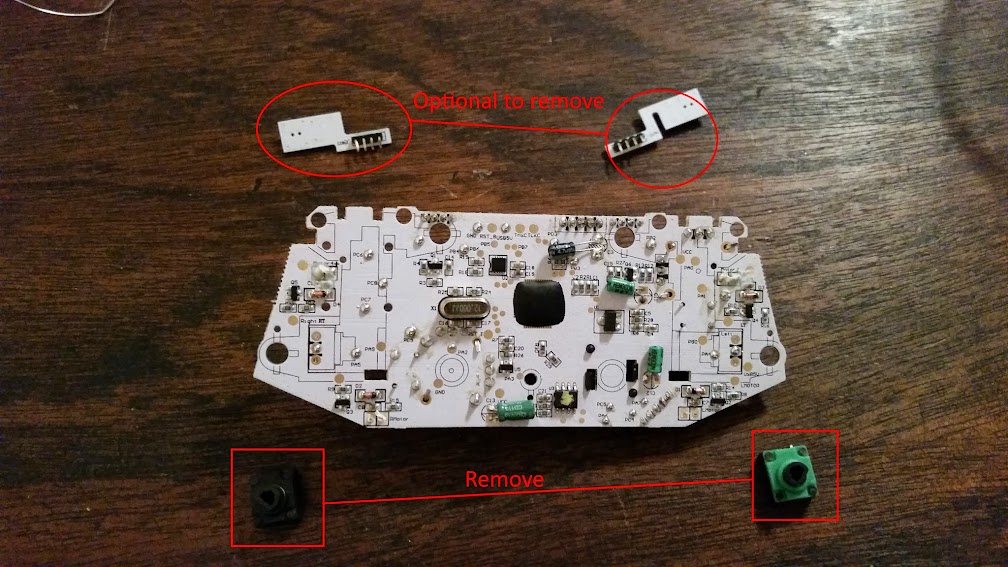 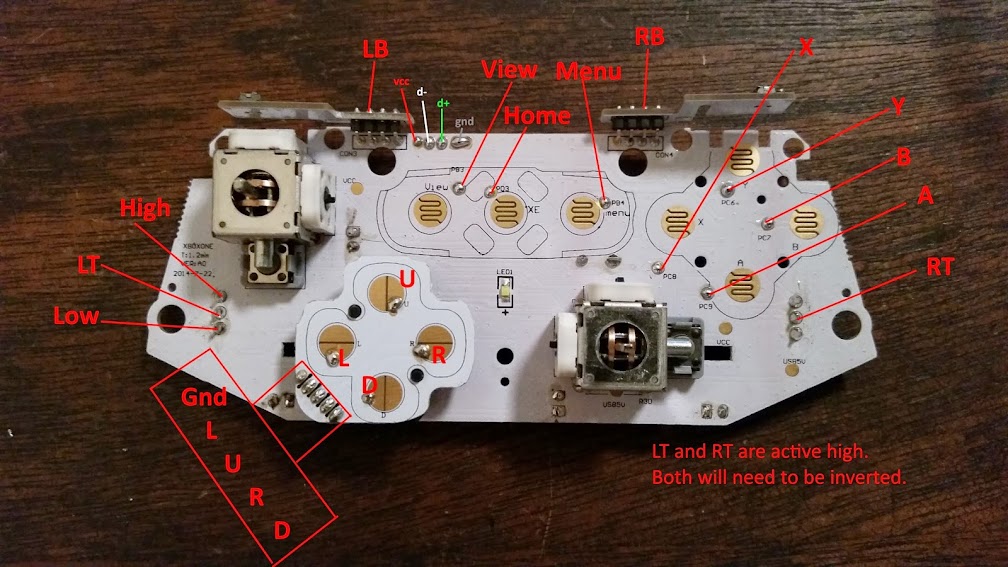 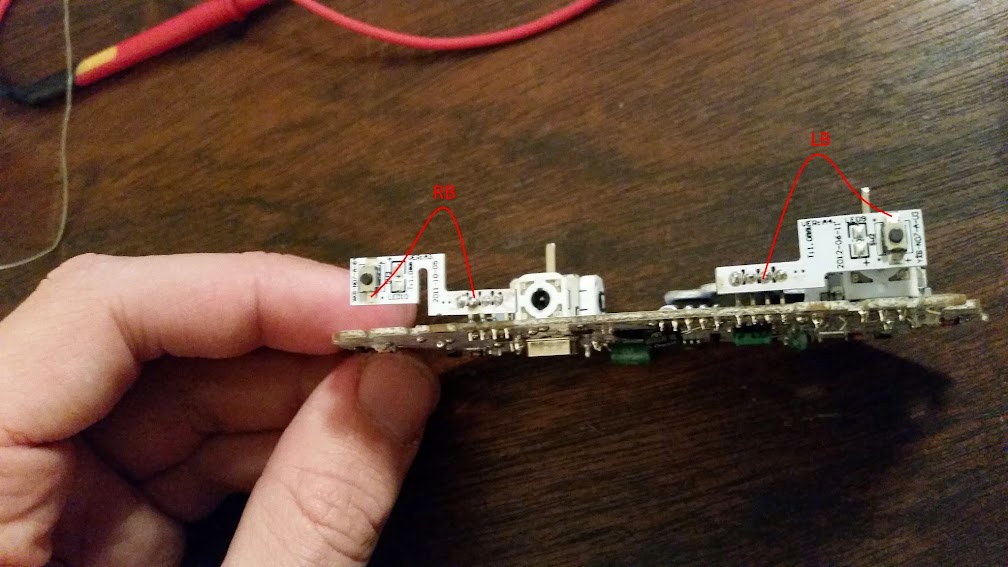 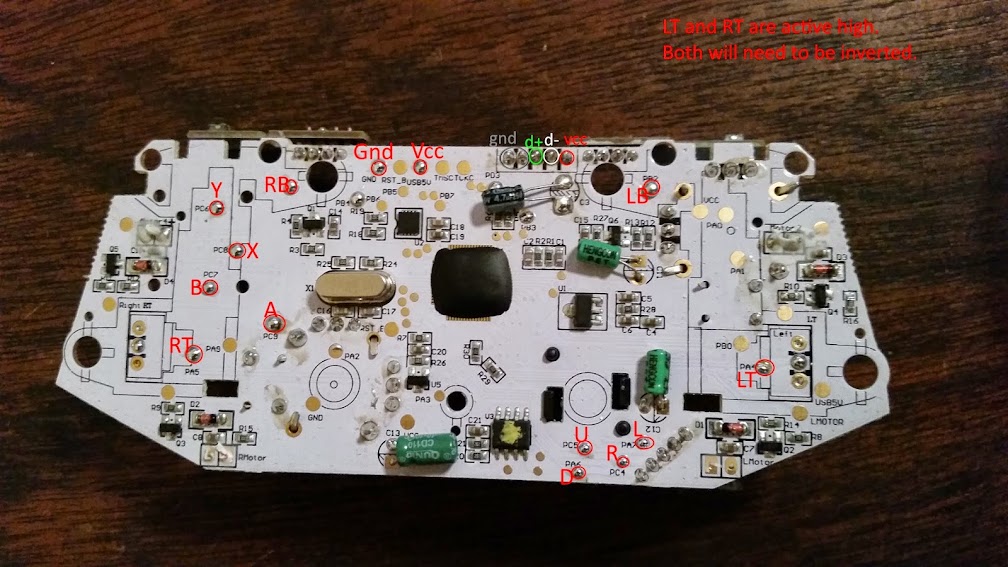 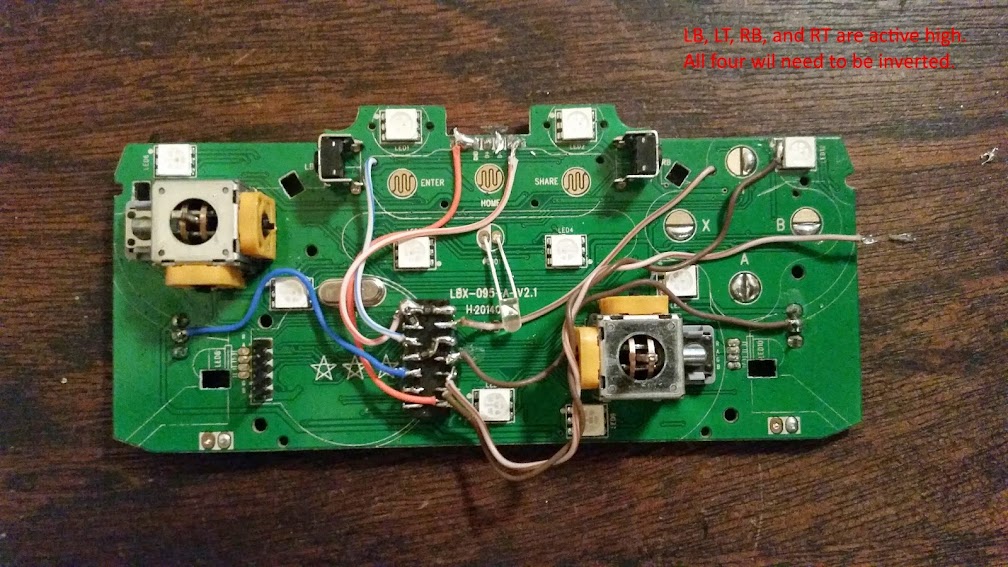 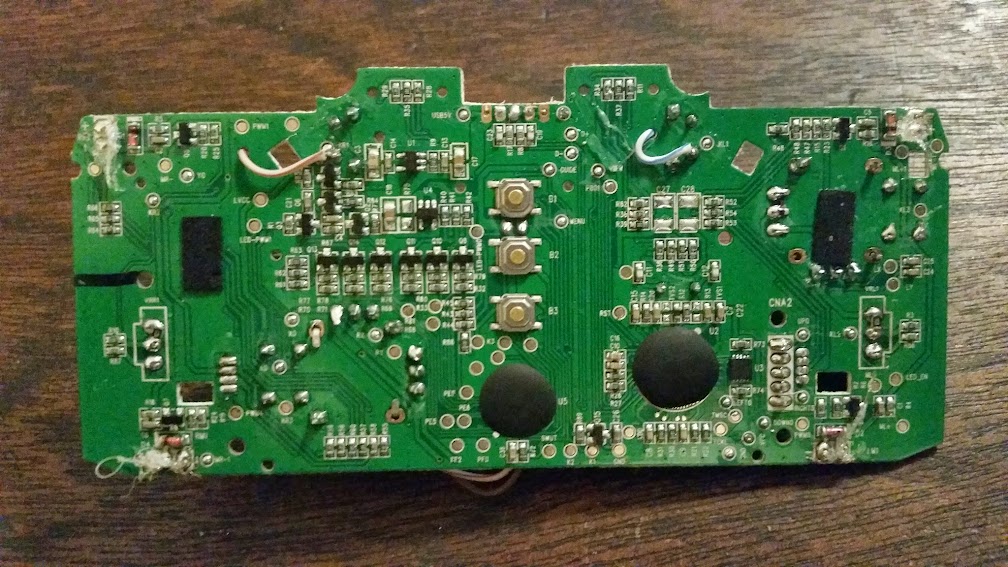 Need advice about a arcade stick
Absolute Question and Answer Thread v.3 (ASK YOUR QUESTIONS HERE!)
New to the forums and stick building!
Gummo October 31, 2014, 8:31am #3

Mortal Kombat X fightpad:
This pad seems like the best option so far for adding XB1. No trigger inversion and supports 360 mode as well. It is a bit pricey compared to the others at $50. I would suggest removing the switches and the perpendicular view/menu pcb to save space and prevent something internally hitting the switches.

These are the worst thumb sticks I have ever encountered in my entire life. Its as if they tried to just do a plastic mold of an existing thumb stick. 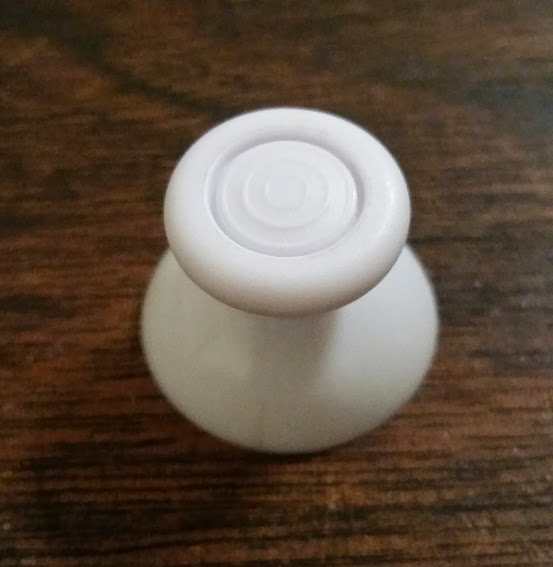 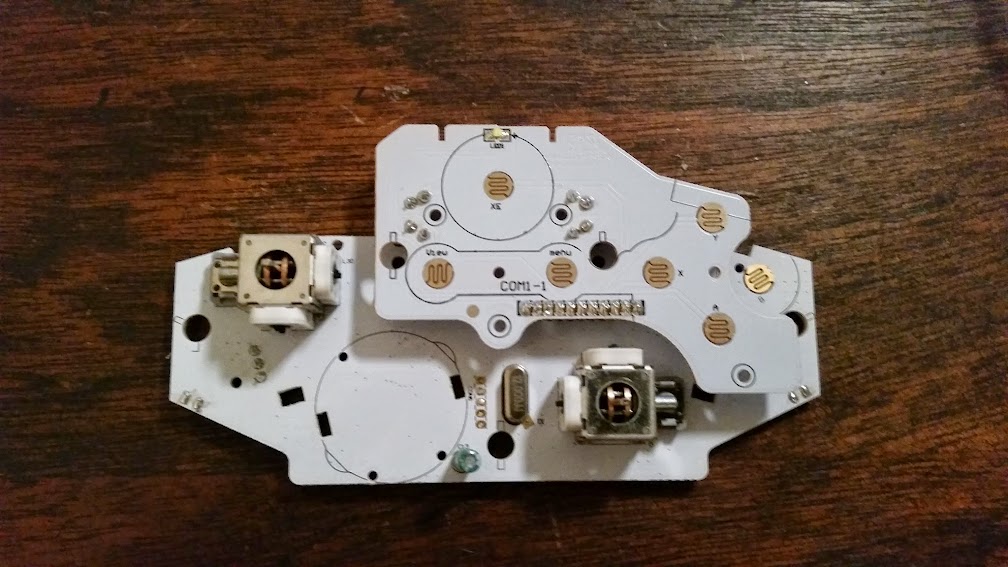 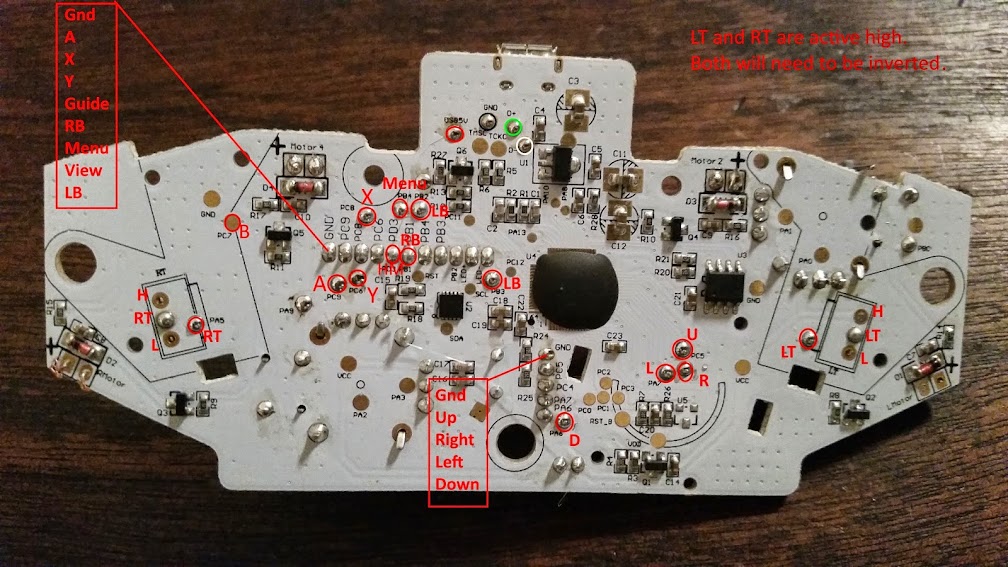 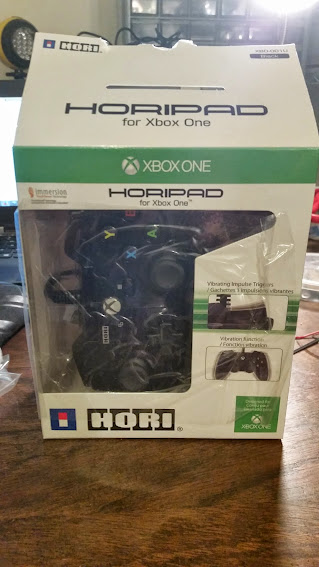 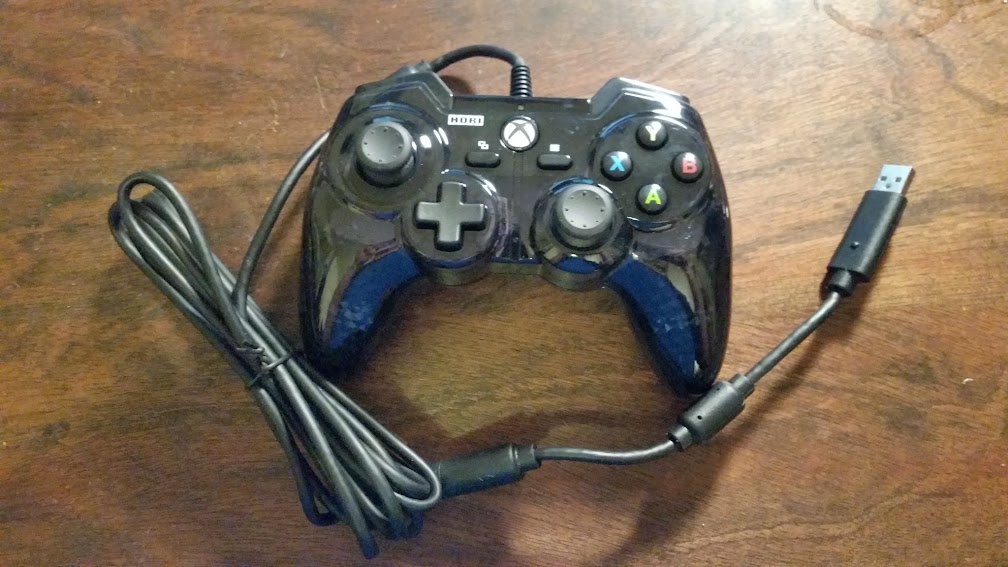 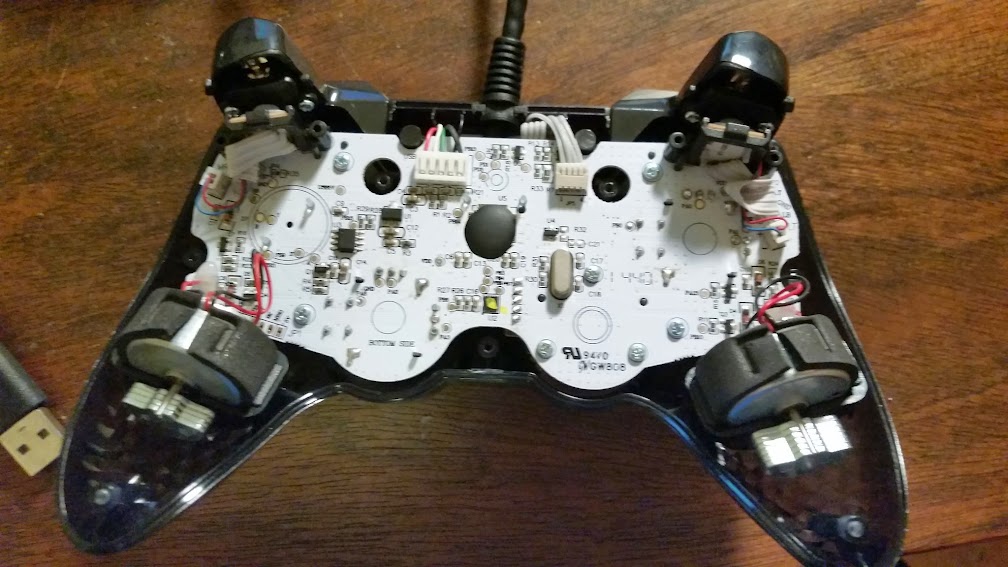 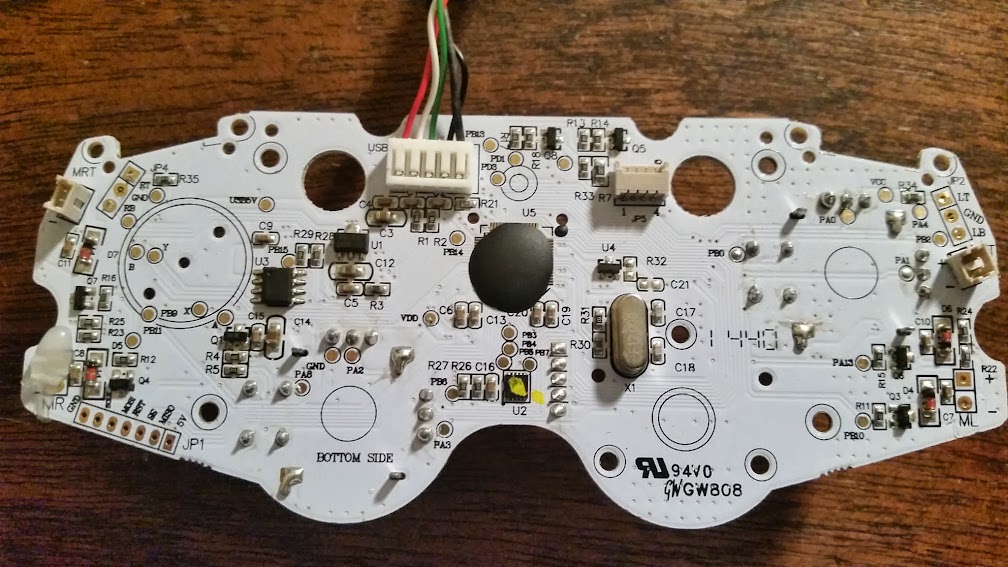 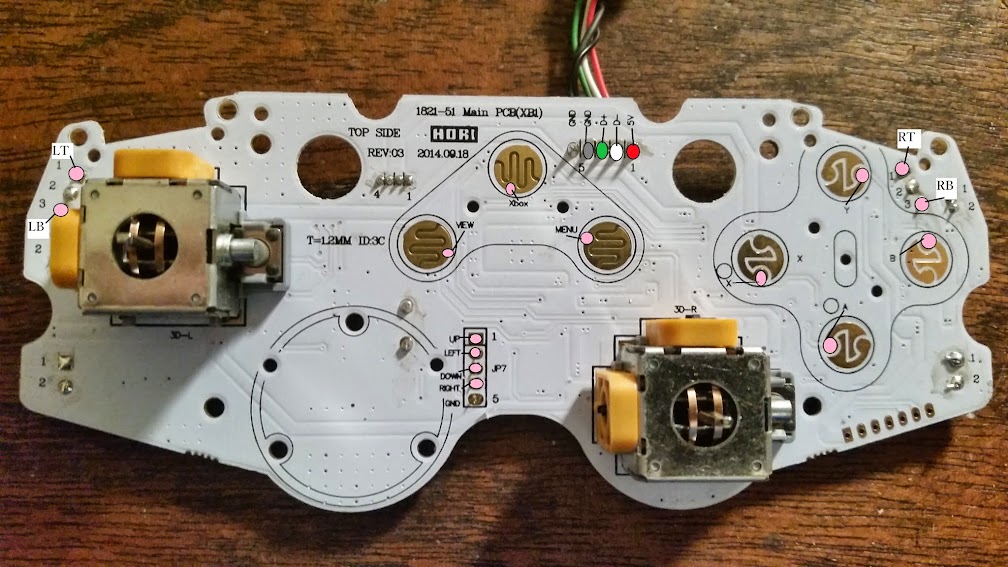 One great thing about this pad is that the triggers are active low unlike the other xb1 3rd party pads. So no need to invert the triggers on this pad!

EDIT- I’d rather have the colored breakaway cables from the Mini instead of the white microUSBs from the Rock Candy.

EDIT2 - Looks like the “Realtree” version of the Mini can net you with the breakaway cable in white, green, or orange, but MSRP on them is $5 more. Otherwise the standard ones are black or green.
I would assume MS made the breakaways interchangable with the 360 ones (same design/pinout) but isnt confirmed yet. If anyone finds out please let us know.

The breakaways are the same.

One suggestion that I might make:
In your top picture with the 3 PCBS together, I’d recommend that you label which PCB is from which controller.

It doesn’t help that the picture (from top to bottom) shows RockCandy/Mini/Spectra, but your listing of pros/cons go in the order of Spectra/Mini/RockCandy.

Lots of good knowledge and how-to up in here! Thanks! I’d been wondering about the mini since it was released a few weeks ago.

PDP is going to be re-releasing their VS pads for the Xbox One and PS4… here’s hoping that the Xbox one version is easily modded AND is good for dual modding (unlike the 360 version).

One suggestion that I might make:
In your top picture with the 3 PCBS together, I’d recommend that you label which PCB is from which controller.

It doesn’t help that the picture (from top to bottom) shows RockCandy/Mini/Spectra, but your listing of pros/cons go in the order of Spectra/Mini/RockCandy.

I read your suggestion and updated the picture as well as reordered the pro/con lineup.

@Gummo
So are the hex inverters necessary for the pads or only if you want to use the triggers?

@Gummo
So are the hex inverters necessary for the pads or only if you want to use the triggers?

Yes for the Rockcandy and the PDPMini. But most fighters have a common button layout, by leaving out a trigger you’d have to set your buttons every time you play and your layout wouldn’t match with other player’s layouts.

Great job Gummo. Thanks for this!

It’s funny to see that I also glue the hex inverter on the pad PCB like you gummo (my prefered method on PS3/360 dual mods with madcatz 4716). I don’t solder pull-up resistors on the inputs, just like you because the “host” pcb (ie the pcb from the original stick) already has those pull-ups. It’s no so much for saving up on parts but for saving up on labor.

I actually do have the pullup resistors in there. I’m using smd sized ones. I would suggest adding them as you might run into some issues especially with a single board setup.

http://www.frys.com/search?search_type=regular&sqxts=1&cat=&query_string=hex+inverter
Can i use any of these inverters??

I actually do have the pullup resistors in there. I’m using smd sized ones.

Completely unrelated to the topic here, but I really do like how you use the SMD resistors.
I really gotta start using those even just to neutralize triggers/analogs.

Thanks guys finally got my stick to work again!!

@Gummo‌
i feel as though im missing something in this rock candy diagram
i see HM which i would assume is home. i cant find “view” there is 2 points labeled LB?
is one miss labeled?
also the “B” button looks like a covered contact. do all the contacts look like that before soldering or is it jus that one point that needs to be cleaned and tinned
thanks for any help

I caught the error in the picture with two points labeled LB a couple days ago. One of them is supposed to be view.

If it looks cover its because I tinned the contact before taking the pictures.