I have an SE xbox 360 fightstick, and I’m about to try and build my first custom case. I want to use the SE’s PCB with the new case. Can anyone give me pointers on how to hack the home button PCB? or will this be too much of a task for an intermediate stick modder?

It’s written on the motherboard which is the Guide button, hack that point and a GND then run both wires to a button of your choice. 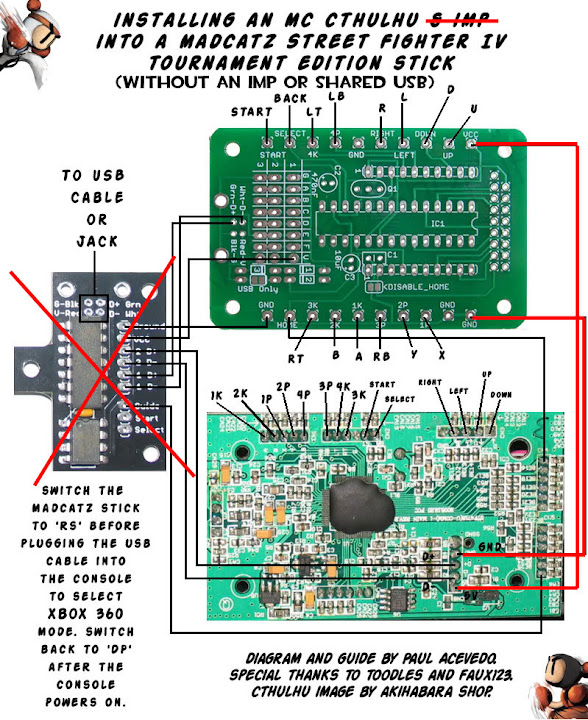 Wouldn’t be that hard.as said above The points are labeled on the motherboard.I m curious why u need to “hack the guide PCB”.if u have a complete SE why not just transplant what you have into your new case.u didn’t mention using a different PCB.

BTW the pic posted above is way off for 360 SE PCBs. Ill tear my SE apart and post some pics.

BTW the pic posted above is way off for 360 SE PCBs.

No it isn’t. That 360 motherboard pic is accurate.

BTW the pic posted above is way off for 360 SE PCBs.

No it isn’t. That 360 motherboard pic is accurate.

mine doesn’t look a thing like that…at least i dont remember it like that.my bad if i’m wrong. I d post a pic of mine but i dont know what happened to it as it was swapped for a ps360 and then that was swapped out for a ps360+.

anyways heres a pic of the turbo/guide/lockout panel
http://i1194.photobucket.com/albums/aa378/platynumx/IMG_20130731_210300.jpg
If the actual print on the board isnt legible heres a guide.The blue line points to the guide,the red line points to the turbo,the yellow points to vcc and the black is ground.the next 4 points beneath the ground are for the player indicating leds i cant remember the order they go in. The lock switch will work as it just disconnects the ground on the board itself thus disabling the guide button.

you could just cut a stock harness like i did if you are using a different main pcb.
example
http://i1194.photobucket.com/albums/aa378/platynumx/IMG_20130731_205841.jpg
note the 2 wires on the middle connector and the rest cut.

Also for what its worth my guide or turbo buttons never worked unless i had the vcc connected.Dunno what was up with that.

Another pointer(sorry no pix specifically of it,but if you look at the lower leftside of the first pic you get an idea of what i m talking about),if you are using a different main pcb,is you could reuse the long board all the buttons plug into and just use the side opposite of the connector spots as it is the groundside. you would want to cut the harness that goes on the left side and only keep/use the 3rd wire from the left and you’ll have a 1 wire ground. then just run the other wires from the buttons to your main pcb. In hindsight i don’t know if doing it like that was good idea…but that was the end result of an EXTREMELY intoxicated modding sessiona few years back

mine doesn’t look a thing like that…at least i dont remember it like that.my bad if i’m wrong.

Dude, there is absolutely no reason for him to use the turbo panel pcb. All it will do is add clutter and hassle to his new custom stick shell. The only parts he needs are the motherboard (which was in the pic I posted above), the terminal strip, the original button wires, and the two ribbon cables connecting the terminal strip to the motherboard.

The only things he will need to do is crimp 4 quick disconnects to the Start & Select wires, and hack the Guide button wires. That is all.

Please use the dedicated padhacking thread.