Does anyone know of a crimp-on connector that would fit on the pins of the original Hori buttons? Similar to this:

Your best bet is to solder directly to them.

Ah, actually I extracted the ones that are used on the joystick, battery and Home button harnesses and they are a pretty good fit.

does anyone happen to know where in the world, besides stupid hori factory i can find the part circled in red?

thank you very much in advance.

does anyone happen to know where in the world, besides stupid hori factory i can find the part circled in red?

thank you very much in advance.

Really!? is that like another thread…? I’ll check around.

umm… i did some search, and no luck.

you have an URL for me mr. mortified?

here you go, first page of the trading outlet forum

Located in Anaheim, CA. Shipped price only applies to the connecting 48 states. I accept payment via paypal gift payment to cut on the fees. If that works for you, then contact me at jamesepoop@yahoo.com Brawlstick shell with joystick and buttons. No PCB. Brand new $25 shipped. Motorola TN20 Navi unit. See amazon link here. Selling for $50 shipped. Like new! http://www.amazon.com/Motorola-MOTONAV-3-5-Inch-Portable-Navigator/dp/B001OAUP3W/ref=sr_1_1?ie=UTF8&qid=1327179841&sr=8-1 JLF Shaft cove…

Thank you!!! Much appreciated.

edit: well there… i messaged him. hopefully he has the part I need.

First of all, these cases look awesome guys.

Now, has anyone had much luck modding the PS3 version of this controller? I know the all-inclusive single PCB makes it a pain, but I’ve seen a few posts showing some success in crimping sanwa connectors and slotting them through a de-soldered board.

Would also love to see some pics of finished PS3 tekken 6 stick mods.

Can someone please link me to the PS3 version template?

I had a “drop in” replacement joystick made to fit my Tekken 6 in aluminum. With SAIA Burgess switches (short blade) it feels way better actually, more like an LS-32 than a JLF. I’m willing to bet that these switches will improve any HORI stick fitted by the factory: 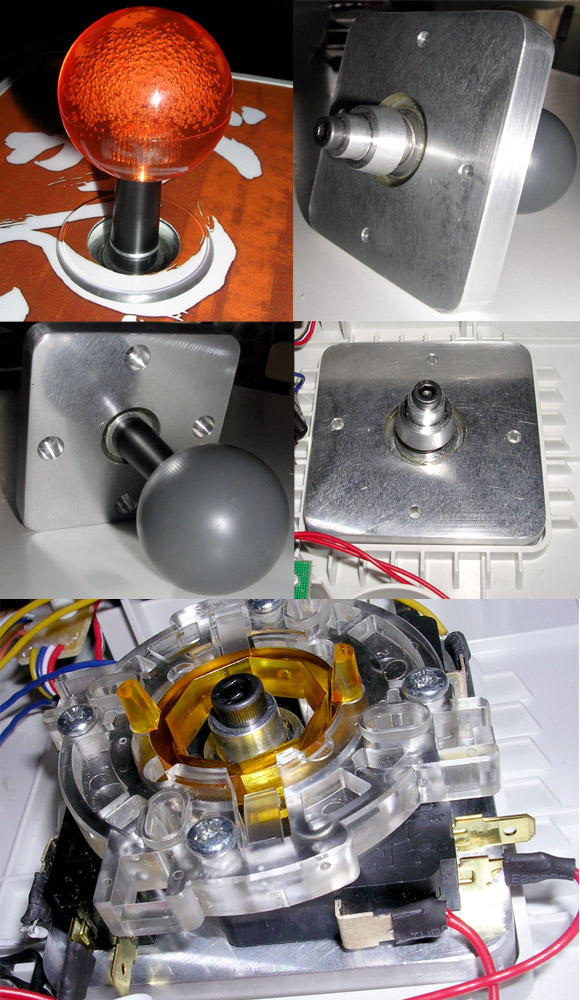 With the SAIA Burgess switches fitted:

As you can see, the switches’ blades are a quite tight fit. I just wish the actuator was a little larger but maybe that would hurt the diagonals. I got the switches from here: http://www.arcadeshop.de/Microswitches-Joystick-Switch-short-Saia_525.html

Has anyone ever had or have a problem with the buttons not registering sometimes or a button registers when pressing a different button? If so can you please tell me how to fix this.

anybody attempted modding the battery compartment? like a play and charge kit? or for example to add this http://www.ebay.com.au/itm/Battery-Bear-Power-3500mAh-14-8V-35C-lipo-RC-airplane-/120786576296?pt=AU_Toys_Hobbies_Radio_Controlled_Vehicles&hash=item1c1f70e3a8

or mybe a usb attached to the compartment so it can also be used as wired.

Has anyone ever had or have a problem with the buttons not registering sometimes or a button registers when pressing a different button? If so can you please tell me how to fix this.

Only when the batteries are dying. Also specify which console version you have.

did u mod urs?

did u mod urs?

ugh tired of charging batteries so made these, usb powerd

looks dodgy but it works.

used a glue gun refill stick. small screws and a long usb wire i found in my room lol, i just wraped the wire in the screws and super glued them.

Grinding holes took me 4 hours, manual work ftw…everything else was piece of cake.

I have 4 sticks i am trying to mod, well 3 and one I am building. There is a lot of info in this thread pertaining to what I am doing so figured I would post here, I am a beginner but I did my reading while lurking just need some help. The 3 are: TE (just art, 2button swap for color, and and new JLF) WWE Brawlstick (Polish top, Sanwa Buttons and install TE’s JLF maybe a neutrik jack) Hori T6 (Paint , Sanwa buttons and JLF, possibly make wired and maybe even with neutrik jack).

Ok Here is a pic after I cleaned up the TE’s body with different sandpapers and a polish wheel to get that damn cigarette burn out , Painted the T6/ removed the button tabs, Polished the WWE Brawlsticks top panel as much as I could, and the other pics are the semi sanded and shaped wood for the custom box. (with the te panel on for reference)

I guess I should start with the Te which also goes for the Brawlstick and the custom because I will be using a te replacement panel for it, I understand everything I am doing just dont get how it works for mounting the JLFs, I see the panel and the welded on under-mounting plate, the oval holes on the JLF mounting plate, which line up with the circle holes on the welded on under-mount, do you just screw it in and it holds? I don’t understand how it stays and when I tried to attach it to the te’s panel in the last pic^^^right above^^^^ to check if the stick clearance was good in the custom and it didn’t really stay put, kept falling off the screws.

That’s basically it, just how to mount the JLF? , for the brawlstick if I wanted to add a neutrik jack i read it would have to be a 24mm hole (is that standard?) and i figure its basically just wiring it up, but wait.how do you do that? Which brings me to what I am trying to do to the T6 because it similarly has to do with wiring usbs. I saw on page 9 and 10 there was some talk about this, someone also wrote the only thing we know about the pins that go to the battery pack are that from right to left the pins are: (3 volt (blank) (blank) (blank) Ground)

Two other guys were talking about this and one guy hooked up the 5 volt to the 3 volt of the pcb, it made the pcb warm up so they came to agree that a 5v to 3v voltage regulator between the points would be the solution. I’m assuming this worked so I just want to ask if I am correct in thinking that the other pins or wires between the ground and 3v don’t matter?

I also come across this discovery when I noticed I had a pcb of a wired 360 controller lying around, I desoldered the usb cord and the pins were all in tact, and whowouldathunkit? it fits right into the thing in the battery pack. now I come to the ? if that thing works and it fits like that because it is supposed to, would that mean you wouldnt need a voltage regulator (the thing in the battery pack regulates it?)

This leads me to think that you could just leave your T6 wireless and hook up a usb (that’s wired up to a pin thing) and plug it in through the thing in the battery pack to make it wired when you want it to be.

if I wanted to add a Neutrik would I be able to cut the 4 pin thing off my USB cord leaving enough wire to hook up a USB B which would plug into the Neutrik from the inside, rewire the USB or just get a USB A to a cable for the outside to console?

Ok so a recap is:

This is my first post so if I got anything backwards or wrong, let me know.

I just bought one and am looking forward to modding it. Easiest option for sticks is to swap it out with a JLF but switch out the shafts and use the Hori one correct?