Every fighter from Capcom liked Christmas a lot,
But the demon secret boss from Capcom did not.

Akuma hated Christmas! The whole Christmas season!
Besides writers at Gamefaqs, no one quite knows the reason.
It could be that his tattoo was glowing too bright,
It could be, perhaps, that his beads were too tight.
But I think that the most likely reason of all
May have been that his black belt was two sizes too small.

But,
Whatever the reason,
His belt or tattoos,
He stood there on Christmas Eve, pitying the foo’s,
Staring down from his cave with a pissed, badass frown
At the overused sprites that lived in the town.
For he knew everyone down in Capcom beneath
Was busy now, buying gifts for Zangief.

“And they’re putting off training!” he snarled with a sneer.
"Tomorrow is Christmas! It’s practically here!"
Then he growled, as he started his evil vibrating,
"I MUST stop Christmas and get Ryu to start hating!"
For, tomorrow, he knew…

Some mousse for Charlie, Kakyoin, and Rose.
For Felicia and Midler some new decent clothes.
For Vega a new mask and a shiny new claw.
And for the succubus Lilith, a new push-up bra.

And THEN
They’d do something he hated a lot!
Every fighter from big Victor to little Servbot,
Would stand close together, with Christmas bells ringing.
They’d stand hand-in-hand. And those fools would start singing!

Then he’d taunt! He’d taunt!
AND he’d TAUNT! TAUNT! TAUNT! TAUNT!
And the more Akuma thought of Dan Hibiki taunting,
The more he thought, “I must stop that village idiot’s flaunting!”
"I’ve been putting up with this for about eight years now!
“I MUST stop Christmas from coming!
…But HOW?”

Then he got an idea!
An awful idea!
GOUKI
GOT A SATSUI NO HADOU NI MEZAMETA IDEA!

“I know just what to do!” Akuma grunted with glee.
And he made a quick Santy Claus hat and a gi.
And he chuckled, and posed “Their cheer I will thresh!”
“With this gi and this hat, I’ll be Christmas made flesh!”

"All I need is a reindeer…"
Akuma looked around.
But since he used them for target practice, there was none to be found.
Did that stop the old Gouki…?

“No!” yelled the man with the tattoo of Ten,
"If I can’t find a reindeer, I’ll make one in Mu-gen!"
So he called his dog Iggi. And he took rubber band
Then he tied a big horn on top of his Stand.

THEN
He loaded some sacks
For his war against Yule
And then he hitched up poor Iggi
And his Stand called the Fool.

Then Akuma said "Go…"
And the sleigh started down
Toward the homes where the shotos
Lay KOed in their town.

All their windows were dark. Quiet snow filled the scene.
All the fighters were all dreaming without Death 13
When he came to the first house in the square.

“This is stop number one,” The old Demon Claus hissed
And he climbed to the roof, “I’m the Master of Fist!”

Then he slid down the chimney. With very little room,
But if Santa could do it, then so could the Kume.
He got stuck only once, for a moment or two.
But then he just teleported out of the fireplace flue
Where Light’s bots’ stockings were all hung in a row.
“Stockings are for the weak. They’ll be the first things to go!”

Then he floated on one leg, with a frown that was sour,
Around the whole room, and he took every power!
Shadow Stars! Hard Punches! And strength from the Guts!
Search Snakes! Gemini Lasers! And a boomerang that cuts!
And he stuffed them in bags. Then with a strong firm grab,
He through them straight up the chimney and out of the lab!

Then he punked out all the presents and goodies with glee.
“And NOW!” grinned Gouki, “I will shoryuken the tree!”

And the demon made a fist. His digits starting to curl.
When he heard a small sound of a young robot girl.
He turned around fast, and he saw a small soul.
Little cute Roll, who was out for a stroll.

Akuma had been caught by Mega Man’s sister
"State your business runt." The old demon hissed at her.
She stared with wide eyes and said, "Santy Claus, why,
“Why are you kicking our tree’s ass? WHY?”

Akuma needed a lie so he gave it a shot,
But all he could mutter was “Dot dot dot dot dot.”
“You’re that mean Akuma!” Roll jumped with a shout,
And in desperation Akuma knocked her ass out.
He shoryukened the tree straight through the roof.
And with a cool shadow effect he was gone with a poof!

And the one speck of food
That was left in this stop,
Was a crumb that was even too small for Flip Flop

Then he went to other houses,
Stealing gifts by the batch
He even went to Sagat’s place,
And stole his eye patch!

It was quarter past dawn…
All the fighters in bed
All the fighters still KOed
When he packed up his sled,
Packed it up with their presents! Like Demitri’s new casket
And Baby Bonnie Hood’s brand shiny new weapon basket!

Three thousand feet up! Up the side of a volcano,
He’d lay the smack on the gifts like he was Captain Insano!
“Those warriors are weak!” he was evilly humming.
"They’re finding out now that no Christmas is coming!
"They’re just waking up! I know just what they’ll do!
"Their mouths will hang open and they will start puking.
“Then they’ll get into fights and Ken will shout out Hadoken!”

“That’s a noise,” he grunted
"That I simply must hear!"
So he paused. And Akuma put a hand to his ear.
And he did hear a sound rising over the snow.
It started in low. Then it started to grow…

But the sound wasn’t sad!
Why, this sound sounded glad!
It couldn’t be so!
Yet Dan was still taunting and screaming for dad!

He stared down at Capcom!
He narrowed his eyes!
Then he shook!
What he saw was a shocking surprise!

Every fighter from Q to Cap Commando,
Was singing! Without any presents to show!
He HADN’T stopped Christmas from coming!
IT CAME!
Somehow or other, it came just the same!

And Akuma, with his sandals ice-cold in the snow,
Stood puzzling and puzzling: "How could it be so?
"They should be throwing Hadokens, hitting Shorykens!
"Koryukens, Gadokens, and Shippu-Bam-Bookens!"
And he puzzled three hours, as he was mad to the core,
Then Gouki thought of something he hadn’t before!
And he nodded with a smile and crossed his arms as he stood.
“Maybe Christmas…perhaps…is about being good!”

But this touching scene was soon interrupted,
As he sensed the one man who was just as corrupted.
He saw Juni and Juli and Birdie and Bison,
And Balrog the boxer who resembles Mike Tyson.
As he saw the all the gifts ravaged by Shadaloo,
He thought "I know now what I have to do."
But the odds were against him and the fight was not pleasant,
For it seemed the reformed Akuma would not save a present.
"Soon I will add these gifts to my Psycho Drive,
“And then,” Bison smiled “I’ll be the strongest alive!”

And what happened then…?
Well…in Capcom they say
That Akuma’s super bar
Grew three levels that day!
And he became Shin Gouki as his power went max,
And he gained the strength of ten Hugos and one or two Jax.

And the spirit of Christmas helped fuel his resistance,
As he beat Shadaloo within an inch of existence.
After only a moment they were all screamin’
As he took most of them out with his Raging Demon.
It would have been better if M. Bison ran,
Because Akuma yelled "Kongou Kokuretsuzan!"
His now green tattoo was glowing for all of them to see,
“Because it is Christmas I will let you five be.”

And for a minute his belt didn’t feel quite so tight,
And he traveled with his dog through the bright morning light
The people of Capcom were more than good sports,
And Adon was freezing from just wearing shorts.
He gave back every gift. He gave back every toy,
For Dee Jay, for Tron Bonne, for Raptor, for Roy!
For Anakaris, for Chun Li, for Q-Bee, for Ken,
For Jill, for Saturn, and Akuma’s rival Gen!
For Fei Long, for Hinata, for June, for Hol Horse!
Did he apologize to the injured girl Roll?
But of course!
For Jotaro, and for Dan who he liked the least,
And he…

…HE HIMSELF…!
Akuma gave back to the green, rolling beast.

May your super bar grow 3 levels this season!

Aw shit, it is that time of year again. At least SRK has the decency to wait until after Thanksgiving.

Brings a tear to my eye every year sniff

There you go! Now that it’s December it’s appropriate! 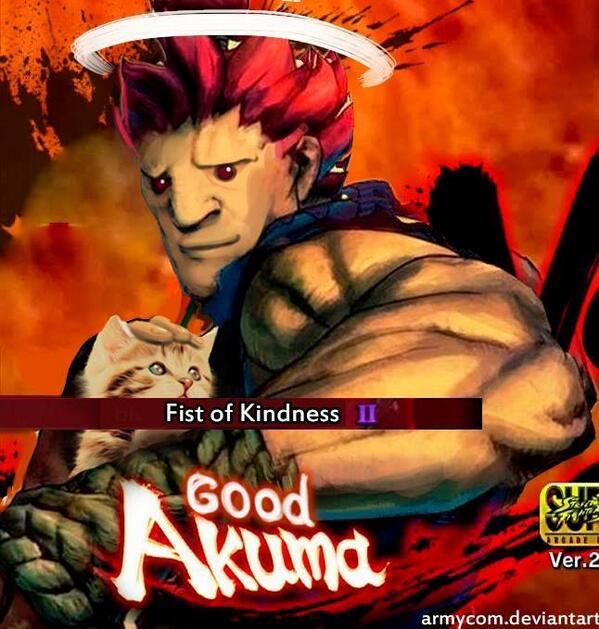 Still so good! May this never die.

I’ve been on this site for about 12 years now and I still love seeing “How Akuma Stole Christmas” pop up every December. I just can’t not be excited about seeing this thread name every freaking year.

Your av is amazing

Don’t even care anymore. Knowing that this is just cheap youtube hits has taken the magic away.

He did give credit to the original author.

He did give credit to the original author.

As long as we get our Christmas presents its all good!