How to mount a Fanta-joystick?

How is it mounted “correctly”? 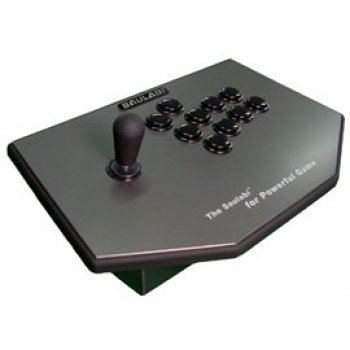 How is it in the arcades over there? Anybody got any pics?

Hey Per, I know some people at Tekken Zaibatsu who sell (or at least used to) custom Korean sticks. I’ll ask them about it and get back to you. It might take a day or so.

Do you have any specific questions? I honestly don’t know how those two pics mount the stick differently. Are you asking if there is a specific type of mount like top or bottom?

EDIT: For now I found this site (in Korean). http://www.stick.wo.to/ I’m not fluent in Korean but if you click the second blue link at the top you’ll get a new window that has some pictures at the top. If you click on the joystick it’ll give you some decent pictures of a Crown. When I have time later, I’ll see if I can translate some of it or at least get my cousin to do it.

From building one before, depending on the material thickness for the top of the box itself, if the material is thick you should be able to mount it from the bottom and have very little of the collar around the top exposed. if the material is very thin (like in my case) I had to fabricate a spacer to let the joystick sit low and have about 3-4mm of the collar exposed. from looking at some korean machines that we have here, very little of the collar on the top is exposed on the top of the control panel. I guess the lower the better since if too much is shown it could become an obstruction.

the machine i seen up here is more like picture #1

When I did mine a while ago, I did it like pic 1. I did it like that because of the size of my hands. When it was lower it didn’t feel comfortable, and I didn’t get a good grip.

I think either position works, just pick what feels good.

Paik4Life
Thanks man. I needed to know how much the black thing on the joystick need to be exposed to make it like in the arcades.

finkle
My new model can take any hight on the stick, but I would like to know the exact measurement. More like #1…ok. Thanks!

EJM
OK, I will think about that, thanks!

paik, you ever hit your friend up at tz?

Hahaha, insomnotek and I had a funny PM exchange just now because the person on TZ I was referring to was him. I didn’t know he frequented the forums until I did a search on TZ for some other people who were selling sticks.

Long story short, insomnotek read this thread and was thought to himself “I wonder if Paik is talking about me?” and oddly enough I was. Him and another person who was selling back at one of the old Evos.

But thanks to insomnotek he has some measurements for you

"i just looked at my stick and the collar is about half a cm from the surface. the wood it is mounted to is about 1/2 inch thick. these measurements are as accurate as you can get with an eye and a ruler.

also, ive seen korean sticks mounted at different levels. as long as its in the general area, im sure it wont really matter.

Hope that helps a little. I also asked my cousin who just got back from Korea. He said he mostly saw Sanwa/Seimitsu style sticks in Korea but that the Fanta style he saw were more like the second pic from Play-Asia. I think that one looks cloer to 5mm than the first pic.

I’ll get to trying to translate that page a little later. I don’t feel like installing Korean language pack on my comp so I’m just going to use my cousin’s. Also my Korean is pretty rusty : )

Also a big thanks to insomnotek!

OK. But if anybody could measure with this:
http://www.toolparttrading.se/media/artnr_4920.jpg
it would be great :), but you can`t have everything in life…
But ok, so 5mm is “normal”, ok.
Thanks!

It’s a little hard to believe that your cousin told you that most arcades in korea have sanwa/seimistu type sticks. That’s definitely false. With the exception of some VF4:FT, 99% korean arcades use Korean sticks with the usual bat tops.

I already sent TheRealNeoGeo a reply to his question, but the black base is 2mm above the panel on the latest Crown cabinets which is THE cabinet in Korean arcades right now. The 2nd picture is the way it should be mounted. The screws go in from the bottom.

I have the control panel from those Crown cabinets at home (that huge thing I took to evo to play on) and the measurements are coming straight from that, so trust me on this.

Hrm…I don’t know. He just got back from Korea about 2 weeks ago, but then again he only played T5 and he said they were ball top Sanwa-style. He also didn’t frequent the arcades because he was too busy getting drunk he said. Hahaha.

You have a panel so I think you would know! : )

there havent been any other tournaments at that place since that last one i think. the new tekken is out so the only tournaments now are at arcades.