How would you fix the "Staged Match" problem?

Did you see the TX Showdown GF of UMVC3?
I’m sure it’s not the first time you’ve heard about this. I’m sure you’ve heard about Fanatiq and Chris G in FR 16.
We also had that time when Justin Wong got that yellow card after “throwing” that match against Noel Brown.
Thing is, this match staging stuff is starting to become a real problem IMO.

I personally don’t have anything against two players doing whatever they want with their match and their prize money, however, it would be foolish to pretend that tournaments are just about the players. The community has grown, and now there’s also tens of thousands of spectators at home. TOs now have to establish a balance between them.
Like I mentioned, I can understand it on a personal level, but I think players should remember that the ultimate goal of every tournament is to grow, and this kind of attitude hurts it.

I can’t really think of any specific way to stop it other than having the players stop it by themselves. A friend of mine suggested having a character lock, but that’s a horrible idea in a genre where matchups are everything. I also don’t think banning players helps at all. Maybe the other way is to have sponsors discipline their players, but honestly, why would they?
Sponsors more than anything want exposure, and they get it by the tons when there’s drama. Fanatiq tweeted he got a raise a week or so FR16, so his sponsor didn’t seem to take disciplinary action at all.

I just really wish we don’t end up having a staged EVO Final. That would be incredibly lame.
I wonder what will the TOs do?

Fanatiq Gamerson ‏@MrFanatiq
I had cleared it up on stream but i guess I should tweet it as well. I wasn’t dropped from PDP it was April 1… I got a raise @honzogonzo

I will give the money to charity for poor people (like me) instead to the players :razz:.
Also, fuck the spectators, the tournaments are about the players not about what the stream monsters want to see.

I didn’t even watch the finals, turned that shit right off and went to bed. Justin is notorious for pot splitting, so I’m not surprised to hear he did it and fucked up another GF. It is what is, these players are still living in the past and don’t see any room for change. The FGC will remain stagnant and never grow beyond what it is right now, if this sorta behavior continues.

Pot spitting doesn’t bother me at all. Not trying is the problem.

For some reason, people think this goes hand in hand.

I just edited the title of the thread. My point is definitely more regarding staged matches instead of pot splitting.
BTW, he’s the video of last night’s grand finals.

if you don’t like splitting, get good enough to beat the people that do it. i agree that it’s damaging to the integrity of the competition but at the end of the day its their money to choose what to do with it.

I agree with @SuperFreak that this is definitely less about splitting (which is whatever) and definitely more about not playing out your set.

I agree with @Hecatom that this is definitely less about stream monsters and definitely more about how the active player base reconciles with itself the priorities of the community, whether they be growth or cash or entertainment or whatever.

This is just one of the very real growing pains that our community will have to come to terms with. Aside from showing poor sportsmanship and consideration for the players who aren’t, you know, coming out anywhere near even on their trips/hotel and travel costs/vacation days used/etc., the #stAGEd player matches aren’t really breaking any rules, or at least any enforceable ones that TOs will be willing to see through (full disclosure, next year will make a decade for which I’ve been running tournaments and my tournaments explicitly prohibit uncompetitive play at the risk of tournament disqualification). And yes, I will bring TOs into this discussion because rules need to be enforced and we rely on TOs and their staff to do that.

There is definitely a reluctance on the part of the still-really-good-at-games crowd, or the old elite, to take part in a changing of the guard with respect to the culture of the community. There is absolutely an “I can do whatever I want” mindset and back in the day we would resolve this with quarters at the arcade, but it’s just not that way anymore; if you didn’t like the cut of someone’s jib, you just put up however many credits you needed to correct their tone. Regardless of whether we like it or not, that environment does not exist anymore and it cannot exist if we want the huge tournaments and the myriad sponsors and the huge pot bonuses. If we are willing to give up those things, then yes, we can go back to the decidedly Darwinist legacy of the arcade era, but we all know that nobody is willing to do that.

The overarching issue is that this community wants to have its cake and eat it, too, while trying to remain blissfully ignorant of the changes that are happening more rapidly than NetherRealm Studios game patches. There is always a breaking point, however, and while a few rotten apples may not spoil this bunch, they also may inadvertently work toward the detriment of their fellow players. This is where the C in FGC breaks down; where players and organizers suddenly feel that they are not beholden to anyone. It’s an attitude that has to change if people are serious about fighting games not only growing, but also about fighting games being taken seriously worldwide in the same vein that other genres are.

Thanks for the vid JD, I feel asleep early and didn’t catch much of the top 16

The only way not to have this happen again is to penalize them points in their standings, penalize their sponsors (if they have any), and give their rewards to someone else. Gotta hurt their pockets

The TO is affected because your event can get a bad name and nobody wants to watch that silliness. You’re going through all this effort, time, and money to put on your event. Now you have to hand all the money over to these guys who have basically said “F your tournament.”

Potatohead and Levelup are affected because staged matches are a CPM slayer and now they’ve paid all that money to fly out and might not be able to recoup without 30k views on the finals once it hits youtube. Also, people kick in their 4.99 to chat on hype grand finals. I doubt anyone joined during the David Graham pizza hour.

That said, I think the intentions are a little better here than something like Fanatiq’s last outing. People are always complaining about Morrigan GF so they agreed to just do all random GF because they thought that would be a hit with everyone. Turns out that was wrong.

I agree with @Yannick that nobody outside the biggest events can really afford to say “don’t come back next year” to Justin, ChrisG, etc. and expect their event to continue to grow.

Solution? Start compiling embarrassing footage of known offenders: Justin, ChrisG, Fanatiq, Knives, etc. Then, the next time they do something like this: Justin dancing and driving over cones is on loop over the stream and on the big screen while you have a sit down with them. From what I’ve seen, stream monsters have folders full of such clips and are more than willing to share them.

Like mentioned earlier, why not get better so these players don’t do this ?

Seriously, it’s no fun taking money from your own local tournament or people you’re really close friends with.
Splitting does show sign of respect with the other player , so it’s all good. If you feel like it’s a problem , defend your home turf, get better!

Thing is, this pot splitting and match staging stuff is starting to become a real problem IMO.

I disagree with Hectacom. Tournaments are about the players just as much as boxing is about the fighters. This kind of thinking is what keeps fighting game tournaments relatively small in the e-sports world when compared to starcraft and lol. Its because this stuff is allowed to happen that the community can’t get to that real sports status and will continue to be funded by pot monsters and not companies like capcom (its even their own game).

Also if you don’t like it then stop watching. Stop participating. Tweet EG and AGE with that hate mail. I just need to see this crap happen one more time and I’m done with this community. Everyone is so memememememememe that they can’t see the bigger picture. Damn poor people mentality.

oh yeah. if it was my tournament I would have DQ’d them both. Awarded them both second place (they wanted to split anyway) and give the remaining 30% to 3rd and 4th places for a money match.

Fuck E-sports
Is precisely because of that shit that we are getting a FGC that instead of growing is starting to become stagnant, where the players no longer play what they like but what is popular with the viewers, and where the games that are played are determinated by the sponsors because those idiots who only post racial shit and stupid memes ad nauseam.

The simple fact that a channel like 8runaway that it was intended for high level SoulCalibur is now just another umvc3 fest because its what the viewers “want” is stupid and saddening at the same time.

We are now seeing a time where the games that are played are becoming homogenized in favor for what a faceless mass of illiterate monkeys that are not even part of the community to begin with i may add, want.

Lol people really are here to watch others play and win money instead of play for themselves.

Same thing happens every year, people whine, they split anyway and just put on a better show for ya’ll.

That is another shit, before it was about everyone trying to take down the people at the top, now is about being a groupie of the top players, fuck that noise.

I think that TOs should have very strict rules about this kind of situation. In the case of a Grand finals throw, delay the payment of the prize money a few days if a match was an obvious throw, and if you find that it was a case where it was like someone who never saw Marvel in their life knew that the match was a throw, DQ the finalists, and bump everyone up two spots (8th to 6th, 4th to 2nd, ect.)

Wake me up a few months from now when this debate resurfaces.

From here on out, if I find out of any MCZ sponsored player/team or sponsored event that allows collusion of any kind. We will not support.

[list=1][]Pot splitting: no problem;
[]Throwing away matches: unacceptable.[/list]You can easily manipulate brackets by throwing away matches, specially when match-ups matter, which is most games. As for finals, that’s the most exciting moment of a tournament, it is just natural that such a tense atmosphere should never be jeopardized.

We have examples that money on the line does not equate top-level play. Too much tension and the micro-management involved in FGs can just disappear, being replaced by auto-pilot play.

ChrisG’s being a real ass on Twitter right now. Viscant bluntly called him out on it. 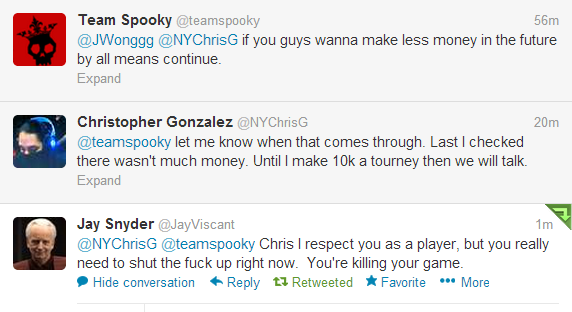