Idea for a better fighting pad

Anyone try playing fighting games on one of these?

Must be heavy as hell to hold though. He should’ve just modded the Capcom Pad Soldier on SNES. Pretty comfy and good dpad.

Whenever I play with a controller as opposed to a stick, I tend to rest it on one leg anyway, so something like this would be ideal for me personally. Trying to hold it like a normal controller would be torturous, I’d think.

there may be a good use for this in gaming. dpads and touch-pads being used together could work.

WHAT THE FUCK IS THAT?!!? That is amazing. Once that hits gaming, wow, it’s going to be incredible. You can pretty much design a controller however you wish, dynamic button layouts, just wow.

Someone posted earlier that round topped dpad. That looks slick, too! Save yourself some thumb blisters.

Just make every pad the PS1 pad problem solved. Or be a real man and buy a stick.

The Sony D-Pad is bad, it just happens to be better than the current competition…

I tend to agree with this, as much as I do love the Dual Shock family, I’ve always had a nightmare of a time using it for FGs. The D-Pad is just horrible for the genre until you play it for 50hrs or longer and rub the textured surface off. I didn’t notice the textures too much until I bought a new DS3 (the limited edition clear gray model – too godlike). I compared it to my red one that I battered during my first 2 yrs of playing SF4 on PS3 and it had no texture left making some (not all) movements easier to execute. On my newer pad, FGs are a pain in the ass because of it. I can’t even command grab on these things. I have no idea how people played SFA3 on PS1 with no analog stick support.

They should make a fighting pad with a touch pad on the left side instead of a dpad. That way you can do all the moves quickly, easily, and accurately. It’d be much better than a thumb stick or a dpad. The problem with thumb sticks is that they’re too slow for doing quick taps in one direction. And dpads are bad because it’s very hard to do what I call a “roll” move, i.e. where you push down, then diagonal, then right. But I think all these things could be done with a touch pad. Therefore it would have no shortcomings. You could easily do both short taps and rolls with a touch pad. The touch pad should have a small bump in the center so that you can feel where the center is. The fighting pad should have a long cord instead of being wireless. Of course it should also be very ergonomic, unlike PS3 controllers.

As far as using a touch screen-like mechanism for the controls, with the build quality seen in current pads, you think something like that would actually last long enough to be worth the sticker price? lol. I’m all for innovations to fight pads in general, but my massive graveyard of pads I’ve gone through and the money I’ve wasted on them in the past makes me believe companies don’t give a crap about pad players. Point blank. If they did, we wouldn’t have shoddy products.

I say this all the time in threads like these, just save yourself the headaches of pad play and learn a stick. Yes, they cost more money. Yes, you’ll go back to sucking horribly for anywhere from 2 months to a year, but I can assure you your stick won’t break down like a pad will.

What do you think about the Steam Controller? 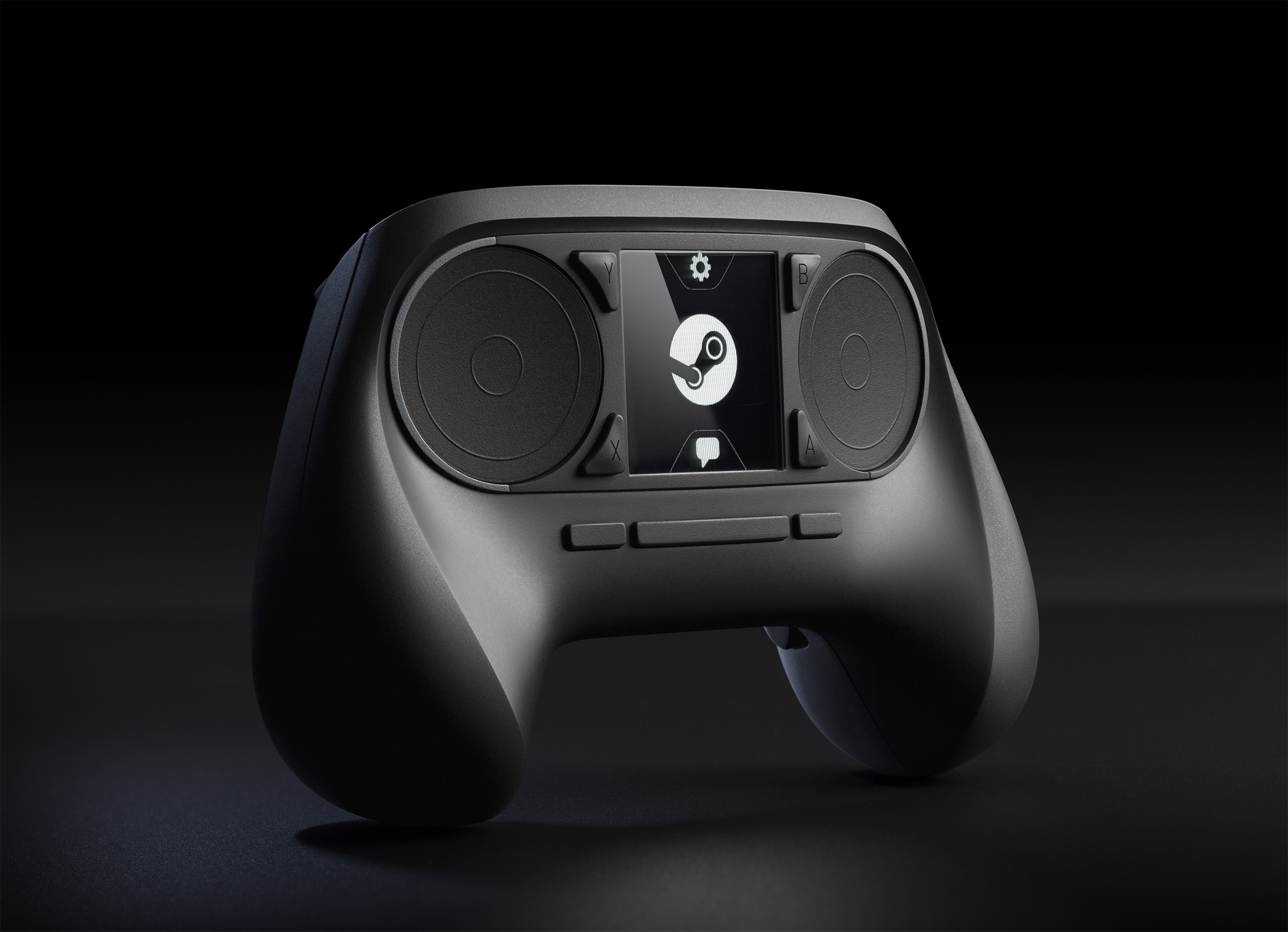 That Steam controller looks like an owl and a set of stereo speakers had a baby.

That Steam controller looks like an owl and a set of stereo speakers had a baby.

It looks like it caught the parents MAKING the baby.

What do you think about the Steam Controller?
http://media.steampowered.com/steam/store/livingroom/controller/SteamController.jpg

As for a piece of abstract art, its alright if you are a hipster
As for something practical, I think it looks like and going to play like utter shit.

From memory, someone here on SRK posted this back when dinosaurs roamed the earth. Unfortunately, no idea who. Whoever it is you’re a damned madman and a genius.

I’m still considering possibly trying to make one for a laugh.

I laugh harder than I should have XD

So, the guy (Rich) who used to make the above is done.

Anybody know a reliable builder gearing up to make Frankens for PS4??

Anyone remember this bad boy? Sliding digital thumbstick, similar to the PSP, but with good ol’ clicky clacky microswitches

I just bought one of these off of nucking futs, its amazing too bad I dont currently play any fighters on the ps3.

From memory, someone here on SRK posted this back when dinosaurs roamed the earth. Unfortunately, no idea who. Whoever it is you’re a damned madman and a genius.

I’m still considering possibly trying to make one for a laugh.

Must be heavy as hell to hold though. He should’ve just modded the Capcom Pad Soldier on SNES. Pretty comfy and good dpad.

Anyone try playing fighting games on one of these?

I actually like the D-pad on the new Xbone controller. It makes me want to get it modded into a Franken (if I ever get an Xbone).

Sorry to echo myself, but anything new on finding a reliable Franken pad builder?

Tefightstands might be able to help you out, he’s madea Franken-stick pad before.

b15’s switched d-pad on that hybrid stick is interesting.

Yo, got a picture of that? I would love to see it.

Also, who is the woman in your avatar?

Also also, for everyone else, learn to play the most execution heavy game on the shittiest dpad and it will make you godlike. I learned SNK games and Guilty Gear X on an Xbox dpad, y’know, the Duke controller melted record abomination dpad?! Now I can do almost anything on any dpad given a bit of time to practice.

I’d love to see Razer make a 6 button fightpad that uses their “hyper response” tech for the buttons. I loved the buttons used on the Razer Onza TE, it’s just that the stick and dpad was garbage. Something along lines of the SF X Tekken SD fightpad w/ hyper response buttons would be great IMO.

I reckon a snes pad design with the sega saturn floating d-pad would be best. I love the saturn d-pad, its the best IMHO but cant get used to 6 face buttons. And the shoulders arent as good either. Just need 4 face buttons and 2 decent shoulders plus a select button to go with the start button and you’re set!