It's Nerf or Nothing

Looked but I didn’t see a thread for nerf toys/guns. Back in the day nerf was the shit. I had toons of nerf toys and guns. Now I have 3 kids and they are into the nerf toys and guns. With me being a bit older now I’m into modding nerf guns for my 2 boys. Anyone have any experience in this? Anyone have any favorite nerf toy? I can’t even count the number of fights my brother and I got into while playing with out nerf basketball hoop on one of our doors.

I honestly thought that I was in the SF4 forum for a second.

Yea I thought this was gonna be about how instead of making characters better Capcom likes to just make everyone worse.

As far as Nerf toys the only one I ever had was this one spring-loaded gun that shot suction darts. It was pretty slick.

The only things from Nerf I liked were the footballs. The guns really had a lot of appeal for me as well as a kid, but I chose getting video games over them, especially the guns with ‘ammo’. I knew I was gonna lose that shit if I stepped outside, and I was either playing video games, or outside running around in god knows what area of where I lived.

thought this thread was going to be about broken street fighter characters.

The office has a Nerf gun on every third desk on my floor. It’s awesome. 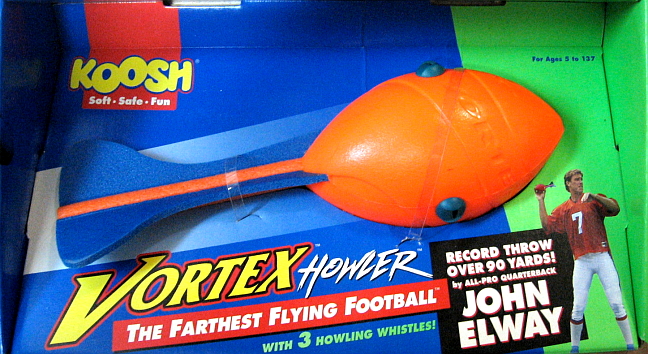 And why the hell not:

I remember wanting Crossfire because of the commercial. Then someone brought it to school and saw the serious lack of lightning effects. Glad I dodged that bullet.

Nerf guns nowadays are what I wish they were back then. Mainly those with clips for reloading. I always wanted to be able to reload like in the movies. I also saw a tripod mounted chain gun thing at Walmart. I would have been crazy over that as a kid.

My nerf war preference was the bow and arrow. I had myself convinced I was some kind of Hawkeye-esque hero.

Has anyone seen that knock off double barrel shotgun where you put the darts in red plastic shells before firing? It doesn’t do anything for the gun, but you get to see the shells pop out after you fire. That would have been something else that sold it to me as a kid.

The guns were cool and this was cool too:

I remember those things some how caused finger jams and foam burns/rashes.

i had the swords, bow and arrow, ballzooka and tons of other guns. the nerf basketball hoop was my favorite growing up. i felt like Jordan dunking on my door. the vortex was awesome too. i’ve recently modded the nerf maverick for myself and my boys. did a barrel drop mod, took out the air restrictors and put a few pennies behind the spring. they shoot nice as hell. i have a few other guns i’m gonna mod when i get the time.

The guns were cool and this was cool too:

I remember those things some how caused finger jams and foam burns/rashes.

And now we have

I own all but the black Marauder sword of the Nerf N-Force line. It’s a lot of fun to play with my sister’s kids with them. Or any young kids in the family. Or even adults. You can go all out with the Nerf stuff for the most part, inflicting enough pain to make someone want to block but not so much that they want to kill you in response. Love em although it’ll be hard to top those swords above (although improving the little buckler shield, a bo staff/halbred, kunai, scimitar, gladius, Chinese sabre, or even a dragon slayer are crazy ways in which Hasbro could go).

I own a few N-Strike guns too. My personal favorite is the Alpha Trooper 18 because of the slam fire. Here’s a website I visit on the regular for the latest Nerf news:

There are new guns coming out soon (or in the case of the Rayven out at Target) and the main feature is light up ammo. Only these guns shouldn’t suck like the firefly (I own that one. It sucks. Do not purchase it.) Here’s a video the Rayven’s range.

[media=youtube]TTvMzVYJRTM[/media]
The other gun is the Lumitron (not out as far I’ve seen) which fires glow in the dark XLR discs. I’ll be getting that one since the gun doesn’t require batteries to fire.

I also miss the F out of the original Ballzooka. I wish Hasbro would revisit and improve that one. Granted the newer dart guns would outclass a ball gun in all but sheer overwhelming force (I’d much rather take on a hail of darts than a sack of balls).

Holding on to your ammo was a bitch. If you shot a missile in a tree or in some tall grass, you was never gonna see it again.

I had a couple Nerf toys, but I never got into it because I knew I would end up losing the ammo for it.

And that Crossfire commercial. I hated that commercial so much. Every time I was watching cartoons and they went to commercials, I got to see that. Every time. It’s pretty much burned into my brain thanks to all the Ninja Turtles I used to watch.

And that Crossfire commercial. I hated that commercial so much. Every time I was watching cartoons and they went to commercials, I got to see that. Every time. It’s pretty much burned into my brain thanks to all the Ninja Turtles I used to watch.

Are you crazy? The CROOOOOOOOOOOOSSFIIIIIIIIIIIIYAAAAAAAH!!!11111111 commercial was the most amazing thing ever.

You should also taken into account certain guidelines when modifying Nerf weaponry.

"It’s Nerf or Nothing"
Sounds like fighting games nowadays.

I found our old nerf thread: Dem' Nerfs: It's Nerf or Nothing!