KING OF GGPO II IS NOW KNOWN AS KING OF WINTER.

IF YOU REGISTERED FOR KING OF GGPO II, YOU DO NOT NEED TO REGISTER AGAIN. 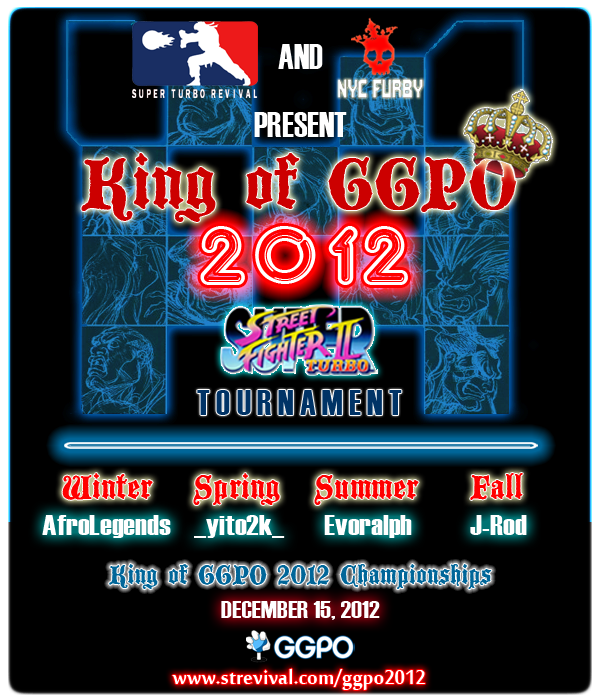 FORMAT / RULES:
[LIST]
[]There are three 64-man bracket qualifying tournaments (three chances to qualify).
[/LIST]
[LIST]
[]ROUND 1 – February 3, 2012 @ 10PM PST.
[]ROUND 2 – February 10, 2012 @ 10PM PST.
[]ROUND 3 – February 17, 2012 @ 10PM PST.
[/LIST]
[LIST]
[]The winner of each tournament QUALIFIES for the FINALS on February 24, 2012.
[]The winner of each tournament may not enter the following qualifying tournaments.
[/LIST]
[LIST]
[]To help keep pings as low as possible, we’re restricting it to players from the United States, Canada and Mexico only. (sorry!)
[]PING LIMIT OF 160ms IN IN EFFECT. IF YOUR PING IS OVER 160ms WHEN CHECKED BY A TOURNAMENT ORGANIZER, YOU WILL NOT BE ALLOWED TO PARTICIPATE.
[*]**PLEASE MAKE SURE YOUR PORTS ARE FORWARDED CORRECTLY BEFOREHAND. IF THERE ARE ISSUES WITH YOUR CONNECTION, YOU WILL NOT BE ALLOWED TO PARTICIPATE. ****
[/LIST]
[LIST]
[]REGISTRATION WILL CLOSE 15 mintues before the tournament start time. PLEASE SHOW UP 15 minutes before the tournament start time.
[]All matches in the qualifying tournaments are 2 OUT OF 3 games and **DOUBLE ELIMINATION. 64 man cap.
[]WINNERS FINALS, LOSER FINALS, and GRAND FINALS are 3 OUT OF 5 GAMES.
[]NO CHARACTER LOCK. Loser may switch characters. Winner must stay with the same character.
[]Akuma is banned. Zangief’s “magic grab” glitch is banned.
[]Anyone who is caught using macros or turbos, will be DISQUALIFIED and BANNED.
[]Any excessive unsportsmanlike behavior will result in a BAN. Keep it civilized, gentlemen!
[]If two players cannot connect, a coinflip will determine the winner.
[/LIST]
FINALS:

[LIST]
[]THREE MAN, RACE TO TEN FORMAT between the three finalists***.****
[]The first two players will be chosen at random and they will play one game.*** WINNER STAYS. **** The third player plays the winner one game. Repeat. First player to**** TEN is the CHAMPION!****
[/LIST]
[LIST]
[*][LEFT]Matches will be streamed by Sabin @ http://www.twitch.tv/nycfurby for the world to see, SO BRING YOUR “A” GAME![/LEFT]
[/LIST]
[LEFT]The winner will become KING OF WINTER and will qualify for the KING OF GGPO 2012 CHAMPIONSHIPS to be held at the end of the year.[/LEFT]

To help keep pings as low as possible, we’re restricting it to players from the United States and Canada only. (sorry!)

yo man this shit is way out. I play everone left and right all day all the time and all of a sudden Im not qualified to participate. I always share whatever I can with with new players, old players whoever the fuck. I’ve ran torneys on GGPO left and right too and I never discriminated anyone from the US and whoever was in the lobby joined and everyone had a great time.

What…is that why there is a latin torney? lets see…me bastard yito kyouya jarek osbr b2spd soto f101 zun and who else isgonna join ?
I tell you what. if majority of the people say fuck beaner beans i dont want him or any of his beaner friends in my tourney then ill shut my big fucking mouth and on top of that ill post in caps

MY CONECTION SUCKS AND I WAS WRONG.

I sound ungreatfull but fuck that man. I love this fucking game as much as anyone of you but now all of a sudden I cant kick it. miss me with that shit.

Feels fine to me (connection that is).

All matches in the qualifying tournaments are 2 OUT OF 3 rounds and ****DOUBLE ELIMINATION. ****64 man cap.

So qualifying matches are best of one game? (2/3 rounds)

So qualifying matches are best of one game? (2/3 rounds)

DJF, I had a lot of feedback from the last one about connections being very bad with players from Mexico so the plan was to try it this way for this tournament and see how it goes. But we didn’t want them to be left out so we came up with an idea to do a tournament for Latin America and allow players from South America to play as well, since they weren’t able to in the first tournament.

I If it were possible I’d make this a worldwide tournament in a heartbeat so no one would be left out.

But I was told repeatedly about the lag issues and so this was something to try, to try to improve the tournament. However, this tournament is for the GGPO/ST community so if enough players here in the US and Canada speak up and don’t mind having it be all of North America like the last one, let’s change it.

What a disappointment, you can ask everyone i played, nobody never complains about my connection, but oh well…

connection was fine, do ur research n get the facts:

GGPO main issue is the spec lag, large amounts of specs comming in n out fuck up the connection, other than that everything is fine, best way to solve it is having both oponents moving to the Lobby after they succesfully connect, which wont allow more specs to join.

Anything lower to 150ms is playable, that n ppl need to set up GGPO correctly before the tournament start.

connection was fine, do ur research n get the facts:

GGPO main issue is the spec lag, large amounts of specs comming in n out fuck up the connection, other than that everything is fine, best way to solve it is having both oponents moving to the Lobby after they succesfully connect, which wont allow more specs to join.

Anything lower to 150ms is playable, that n ppl need to set up GGPO correctly before the tournament start.

I’m very familiar with setting up GGPO and I’m well aware of spectator lag. I’ve been around GGPO for a while.

We always ask players multiple times to go to the lobby after they connect and we tell them to not start the match until they do.

Insulting me isn’t going to help your case and I’m not being stubborn and saying this is the way it has to be. So let’s try to have a constructive conversation and see where this leads.

Insulting me isn’t going to help your case

Wow, u should check my post again, n again n again, cuz no one is insulting u, helping my case? what case?

btw, there is no “magic grab”, its Atomic Suplex reversal glitch

Bastard, just try to have a decent attitude. You won’t get nothing if you despise the ones trying (and succeeding) to keep the scene alive. I can understand it’s quite frustrating not to participate but it’s just for everyone to share a nice experience. There’s no f*cking discrimination or what so ever. My suggestion would be, ok let the south am players participate but, if there is but a slight lag problem they get disqualified. Would be more fair, but I don’t know still if it would please everyone. South am tourney doesn’t seem nonsense.

south am? why the fuck would u let south am players participate in? go n check a map n save us from ur ignorance

Mexico should be allowed, it’s anyone below Mexico that poses a problem.

^I agree with pasky. Put Mexico in it and leave the latin one for central and south america only. It will still be laggy for us but atleast players like djf will be able to show their stuff in the “main” thing and ownt waste their time with south america lag. I wish i could play djf, bastard, kyouya etc all good players but i live in south brazil and for me its laggy as hell, 200+ ms, so its a big no. Even though i have a 10Mb connection (which is very very good for brazillian standards) and i sometimes gets pings lower than 20ms with osbr and decent pings with chile and argentina, but for mexico it doesnt work really well.

Keep the comments coming everyone!

If I could get GGPO to work again I’d love to play but I have no idea whats wrong. It used to work a few months ago and now nothing even after a full re-install.

Sesho, take it easy, man. Kuroppi is the last person here who deserves harsh treatment. The guy is always helping, shows up to tournaments -even organizes and supports a few of them - and provides great content through his blog and his posts. And plays really well, on top of that. We need more guys like him around.

I agree with Pasky and SPD: Mexicans should be allowed to play, unless connection issues arise. It is pretty unlikely that we will have the pleasure of playing them in the other tournament, due to connection issues. Underwater fiber optics should explain why it is so bad, and why we rarely get playable latencies with players from the East Coast: link.

Connection might be an issue for the LA version, but I believe Kuroppi will be able to sort it nicely. My suggestion would be grouping players with descent connections first. If things turn out really bad, it may be possible to split it among regions/countries and allow players to proceed as much as they can, then just call it a draw if it is not possible to finish the whole thing.

If I could get GGPO to work again I’d love to play but I have no idea whats wrong. It used to work a few months ago and now nothing even after a full re-install.

PM me the problem, I can give you a hand.

Will the matches be streamed for each Round?