Leaving this Pokemon fighter on the curb

Sorry if you thought this was Type Wild.

I’ve had this side project going on for close to three years now. A Pokemon fighting game that started off as a joke/test in 2DFM. It eventually grew to a complete roster (minus one) of complete characters and a handful of stages (with stages from other games as supplements). It’s been rotting on my computer for at least half a year now, but some egging has convinced me to release what it is now, and I am interested in knowing what the community thinks.

As this is an incomplete fighter, sounds, features and other things are missing/unpolished, but the core experience is there, which can now be enjoyed in a hastily put together Solo run, or with other people through Lunaport/MTSP.

The game is largely influenced by classical fighters and doesn’t attempt to diverge much from the old formulas.
You have light punch, hard punch, light kick, and hard kick. Hard Punches and kicks to throw. Links, special cancels and the occasional chain. Dizzy.
The one ‘revolutionary feature’ is the Focus Energy, which ensures your next hit does greater damage and stun at the cost of some meter and positioning.

Anyway, here are some screens, and I’ll probably have some videos to follow eventually. 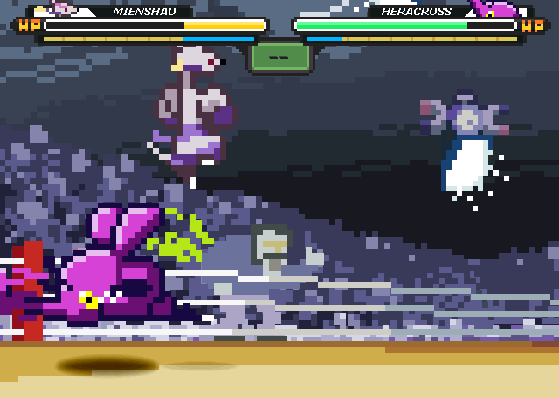 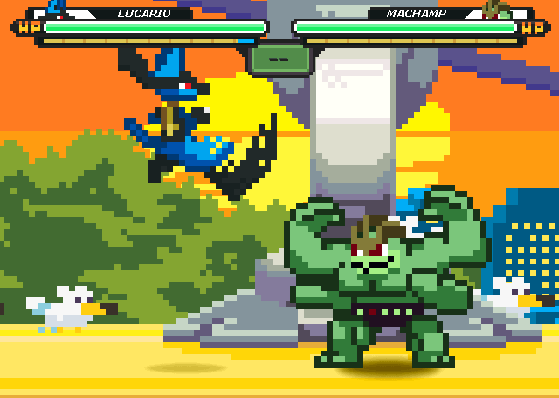 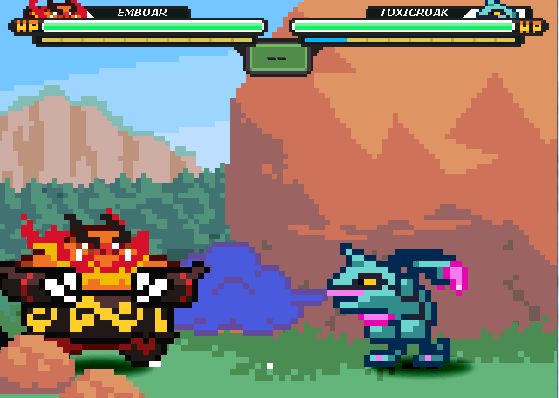 edit: I see, unfinished pokemon fighting game. This game is cool, needs training mode though. Very good job. I played it on mute.

I didn’t include a training mode, but every character can heal their opponent with ‘O’ on the keyboard (you can set the button to whatever you like so it doesn’t get in the way).

I actually prefer playing at that resolution too!

Not as nice on the eyes as Type Wild but the mechanics are much better, though that’s not saying too much lol

This is actually really cool. A really large, unique seeming roster. The few songsyou put were pretty good, and the sprite work might not be fancey but it works. This is really cool. Is there a way to choose a stage in VS mode?

one video at a time:

http://www.youtube.com/watch?v=HTtbe-dtYP0
Things to look for:
Shotocario fighting a nifty Scrafty. I think those hoodlum slides can reset a throw situation if you time it right!
Machamp versus tiny infants. Couldn’t get it going!

http://www.youtube.com/watch?v=WRLTsoMjpdA
Things to look for:
Hariyama turns around a set when he realizes Piston pressure in the corner is nigh inescapable!

I love frustrating it got. I guess the lesson learned is if you can’t outlame, choose Heracross.