Cops: Sex at McD’s gets women kicked out, jumped

Two women who were kicked out of the McDonald’s on 69th Street in Upper Darby Wednesday afternoon for engaging in sexual relations in the bathroom were jumped by a group of customers once they exited the restaurant, according to police.

Shortly before 5 p.m. a group of customers went to the manager of the McDonald’s and told her that there were two women engaging in sex in the restaurant’s second-floor bathroom, said Upper Darby Police Superintendent Michael Chitwood.

“Everybody should do their own thing but doing it at 5 o’clock in the afternoon in a McDonald’s bathroom - whether you’re female and female, female and male or male and male - what the f—?”

The manager went to the bathroom and threw the women out of the restaurant, police said. Shortly thereafter, the group of seven or eight people who had complained about the women ran outside and began assaulting the couple, Chitwood said.

One of the women was stabbed in the shoulder with an unknown object by a female in the attacking group who appeared to be around 40 years old and had two children with her, police said.

As police arrived, the crowd scattered. Officers had to convince the stabbing victim to seek medical assistance at a hospital, where she was treated for her injuries and released. The couple said that their attackers used derogatory language against them during the beating.

Police are in the process of obtaining surveillance footage from the McDonald’s to determine the identity of the attackers. 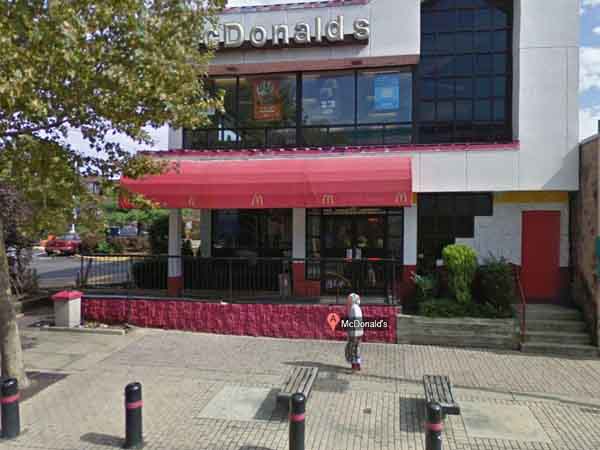 Cops: Sex at McD's gets women kicked out, jumped - Philly

Two women who were kicked out of the McDonald's on 69th Street in Upper Darby Wednesday afternoon for engaging in sexual relations in the bathroom were jumped by a group of customers once they exited the restaurant, according to police.

Women kicked out of McDonalds for getting busy in the bathroom, told to go to Burger King if they want to do that kind of thing (philly.com)

-69th Street
-What the fuck? quote but its not clear who said that, the manager?

Obviously you shouldn’t be using a McDonald’s bathroom to be intimate, but the violence is completely uncalled for. I can understand being upset if someone is screwing where your kids can hear it, but that doesn’t mean you should beat and stab them.

they were using derogatory language and stabbing them???

i’m just gonna go ahead and say that probably wouldn’t have happened if it were a man and woman having sex in the restrooms. sounds like a group of homophobes decided to hit up mickey d’s that day.

I saw the word Philly, and it all made sense. The same fuckers who boo’d Santa Claus, and you expect rational thought from those savages?

pics of the girls please

Chicks had to be of the basic variety, if they were bad bitches, more chicks would have joined in the sex.

I still see no reason for the violence, nor why the customers were angry. Was the restroom locked? Were the two women audible? There was no reason for anyone to get stabbed.

let them bitches get they nut,shit niggaz jack off in the freezer everyday b

Doc you need to be a news reporter on this shit. Get Russian Dude to be camera man so no one would fuck with you and have that assist at the ready.

For such indecency they deserved an asswhopping, but getting stabbed? Ok thats going a bit far.

lol either way. Maybe this will be their wake-up call to act right.

What in the dollar menu hell is this?

Did they really have to use not just a bathroom, but a McDonald’s bathroom that bad that they would stab someone over it?

Chicks had to be of the basic variety, if they were bad bitches, more chicks would have joined in the sex.

If only it were that simple. Girls are willing to go a little wild with each other but it’s mainly to get the attention of guys. After that the boundaries come up pretty quick.

They probably was talking mad shit when the people was trying to kick them out so they got handled. Talking that big tough man talk and then got stabbed with a face full of frozen fries.

I bet they took a pic of the freezer burn marks and put em on the blog with all the chicks showing off their black eyes.

Obviously you shouldn’t be using a McDonald’s bathroom to be intimate, but the violence is completely uncalled for. I can understand being upset if someone is screwing where your kids can hear it, but that doesn’t mean you should beat and stab them.

Disagree. Obviously these women did for the sake of doing something wrong because it makes them feel cool. They deserved a bit of physical correction because these women will just irrationalize their way out just like every woman. I think it’s right that they got the discipline their parents didn’t give them when they where kids.

Good job for the people for being real and showing them the error of their ways the real way. And shame on this quoted poster for that girly-man sensitivity post.

If you do stupid shit, you should get handled in the most stupid way possible…

Mcdonalds in Manhattan have two floors. Dont know about anywhere else though.

I’m glad I’m not mopping up after them.