Hey I’ve been reading Miracleman for a few days now and I can’t put it down?

How many of you guys have read this comic? Its absolutely sick.

The writing and art is so great.

Damn, if anyone needs refreshing its written by Alan Moore and shit.

Miracleman, formerly known as Marvelman, is a fictional superhero appearing in comic books published by Marvel Comics. Marvelman was created in 1954 by writer-artist Mick Anglo for publisher L. Miller & Son. Originally a United Kingdom home-grown substitute for the American character Captain Marvel, the series ran until 1963. It was revived in 1982 in a dark, post-modern reboot by writer Alan Moore, with later contributions by Neil Gaiman. In 1953, the American company Fawcett Comics, which was t...

Alright I’ll pick it up and read it. Which one do I pick up :S

Nice! Dont worry about the other versions. All you should be concerned with is the Alan Moore one. Its the only one I can recommend lol. 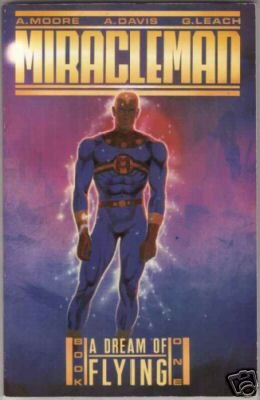 Collects issues #1-3 of the regular series from Eclipse Comics which reprinted material from Warrior magazine. With one word Mike Moran regains his alter-ego, Miracleman, who returns to consciousness ...

If you have a hard time finding it in your local comic store, I’m sure there are other places you can surely find it haha.

I always liked the Alan Moore issues… The Neil Gaiman ones; not so much

You guys are heathens. They all rock, even the Apocrypha.

They’re definitely differently flavored between the Moore issues and the Gaiman issues, though. If you read them all at once you kind of spoil it.

I wonder if Miracleman or Planetary will finish first…

Between his movies, books and TV work, doesn’t Gaiman have enough “FUCK YOU!” money finish this damn book?

You are right Preppy, I just finished the Gaiman issues they owned hard, i have seen the light haha.

Sheng-long: Dude I wish he would finish too, its fucked up! But they is a huge legal dispute between Gaiman and Todd MacFarland thats gonna keep this in limbo.

Ok you guys got me interested, I’m going to pick this up.

Haven’t read it, but Moore rarely turns in a dud. I’ll keep it in mind after I’ve read Swamp Thing, Promethea, Voice of the Fire, and the scads of other Moore works I’ve missed out on.

OH yeah… my bad sorry everyone

No biggy, but really try and read it, it is FUCKING EPIC!

Miracleman (or in the years pre-lawsuits, Marvelman) is indeed epic. And not in the way that some jerk getting hit in the junk with a badger is an epic fail. In the way that the Lord of the Rings is an epic literary trilogy.

Yeah…a little bit of an Alan Moore fan, but I have the singles to prove it.</old fanboy>

Quesada at SDCC says that Marvel Comics has purchased the rights to Marvelman!

Will this finally get done?!?
Will there be reprints?!?
:tup:

That’s what you call a COUP, BABY. I hope this means they can make reprints of the Moore/Gaiman stuff. I am kinda curious about how all the legal wrangling worked out, or if T-Mac will cause some complications or anything.

As Quesada allows, this process began with Neil Gaiman approaching Marvel to re-name the character and thus remove it from under McFarlane’s interest in the trademarked name “Miracleman.”

Marvel Publisher Dan Buckley had this to say about the character’s future, "We are talking to all the people involved in the '80s/'90s material. Alan (Moore), Neil (Gaiman), Mark Buckingham."
That is, Anglo’s interests are in the bag (signed, sealed, and notarized, no doubt), but the relaunch creators are still in negotiation.

What we know is that the old Anglo material is now owned by Marvel Comics.
What we wonder is whether Neil has satisfied all the “relaunch” creators in bringing Miracleman (as it were) into Marvel’s Marvelman portfolio. Bucky’s appearance at SDCC suggests, in principle, yes, though >certainly< only that his and Neil’s material is secured.
Notice the chest emblem on Quesada’s image of Marvelman. Crucial detail. The “new” chest insignia dating from the '80s relaunch has >not< been secured, as it was trademarked by Eclipse and acquired by McFarlane, who retains a share of it with Gaiman and Buckingham.

Very interesting. I believe Moore just wants to make sure that Mick Anglo gets paid, and Davis has an exclusive deal with Marvel already. So in theory this solves just about everything other than McFarlane.