Just wanted to put up pictures of the two recent console mods I did. http://pg.photos.yahoo.com/ph/toodlesdc/my_photos

Gamecube: Region select toggle switch. That little switch in the back selects between US and Japan region when it boots up. No hardware needed, very easy mod. I had to solder the 30 guage wire to two points on the bottom of the motherboard, and then solder them to the switch. That’s all. Now I can play my legit copies of Naruto 3 and Nintendo Puzzle Collection. Instructions at: http://www.phosphors.com/gcn/region%20switch/

Dreamcast: Internal VGA box. This one isn’t quite as clean as the Gamecube mod was, but it works. This white one was for testing; if I do this mod to my black sports edition, it will be much cleaner. If the toggle switch is of, dreamcast works normal with everything going out the A/V cable in back. When it is on, you don’t need the A/V cable at all. The video goes out the VGA port, and the sound goes out through the headphone jack under the VGA port.
The knob in the middle is a potentiometer I put in between the headphone ground and real ground so I could control the volume. By itself, the headphone volume is actually pretty loud, just a little too loud for my tastes. Some of you audio people may be chuckling at the potentiometer, because it doesn’t work too well. I thought it would reduce volume, and it only kind of does that. It reduces the volume on higher frequency sounds, and doesnt really touch the more bass sounds. It is much more livable, but isn’t as clear as a true amplifier would be. If I do this again, I will be using an amp in there.
Because I can now easily play this DC at work, I may get fired soon. Please be sympathetic and buy whatever my broke ass tries to sell.
Schematics for VGA output are everywhere. Inspired by someone else who did this mod, and used the ‘ghetto vga’ schematic.

Next up for me: PS2 VGA cable a la ShinHed. I just need to hunt down chips for a headphone amplifier that wont be a bitch to make or power off of +5v

EDIT: Wii Mod is done. I put up pictures on my Wii mod on flickr: 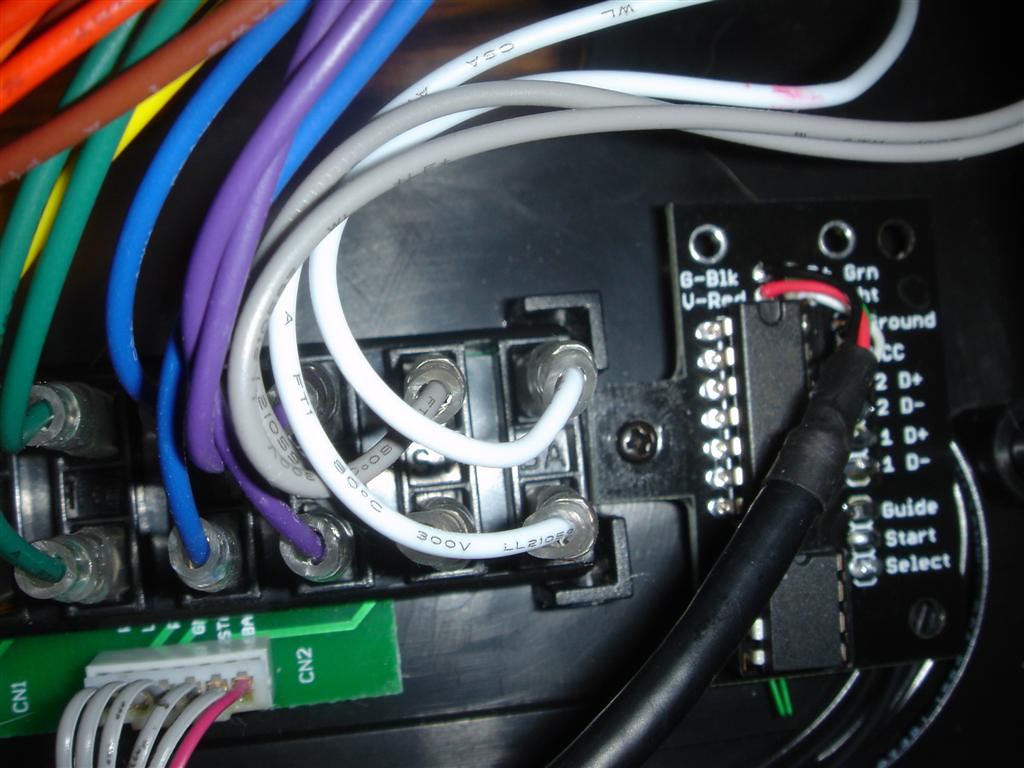 The socket idea and where to mount it came from Crazy Monkey’s guide available online. There are a few differences though.

Right now, I’ve only got a WiiFree chip and a WiiKey (and self made adapter), but since all of the modchips use the same pins on the drive, I can easily fit any chip to the socket and have it work. I’m also future-proof in case of legit games detecting chips; all I have to do is remove the chip.

Cool GameCube mod. I also play Naruto 3 (waiting for 4!!!) and Ikaruga on my GC. Do you know how I can mod a PAL so it will boot jpn-games without freeloader?

Also, the DC mod is awsome!

Thanks, I’ve been trying to find schematics for as simple as possible headphone amps, and havent found anything that neatly fit the bill. The ‘minimal parts’ schematic in lm386 datasheet seems rather nice, even if it I need two per project to get stereo. Thanks, Im ordering samples from them now.

Awesome work Toodles.
I’ve been thinking about an internal PS2 vga/rgb setup, but I’ve no PS2 and I’m tired of Turismo.

Hey, I recently got a DC (I’ve had a PS2 and I have an Xbox) and a green goblin joystick.
I was wondering if any of you know of any more DC modding sites and or green goblin mod site and if anyone had a template for the stick. Thanks

ah cool, thanks for the links Shinhed. im about to embark on my first Agetech mod myself. wish me luck.

that vga dc mod is sick

Haha… so you DO have job. In a company too…

That answers some of the questions that have been floating around in my head.

Do you know how I can mod a PAL so it will boot jpn-games without freeloader?

Sorry man, Im not finding anything on it. It may be possible, but niether google nor myself know it.

Haha… so you DO have job. In a company too…

That answers some of the questions that have been floating around in my head.

Im not cute enough for a cyber-stalker…

Heh. I believe I’m not the only one. There were some others wondering what you do for a living, what your job was, since you buy arcade cabs and game stuff by the million.

Plus there was your six week vacation in Japan…

Not to mention that you wrote “J.O.B. - Just under broke”.

I thought you owned your own company or was some sucessful businessman or something. Or had some really interesting ways of making money.

For those who are curious, Im a standard support geek at Hewlett Packard. The key is that Im old and have no wife or children.

So lots of disposable income. I only have three arcade cabinets, a Korean DDR 3rd Mix, a big red 2-slot NeoGeo, and a large Tekken machine converted to a 1-slot neo geo. All of them are sadly in storage because they are too big for my little apartment. No other arcade pcb’s, but a little over 20 Neo carts. The trip to japan was three weeks of paid vacation, and three weeks unpaid time off. Since the place to stay was given by a friend, that means I only had to pay plane ticket and food, so it actually wasnt too expensive of a trip.

I had a company a while ago, a standard little used game/dvd place. I had it running for just over two years, but lost money like mad in the process. The arcade systems were purchased for the store, but went into storage when I closed the store last Christmas.

Now arcade sticks. Sweet jesus Ive got too many sticks.

^
|
Sorry to hear (or rather read that).
Does anyone know if it possible to put a p360 into an agetec?

What do you mean?