NES/SNES Pad to PC Controller - Anybody know how they are?

Hey I just found this and was curious if anyone has seen these or used them at all. The reviews look promising but has anyone here had first hand experience?

I wouldn’t trust them. The reviews for the Saturn pad say it sucks. If you can pony up a little more these are definitely legit.

I have both the NES and SNES USB ports. They work great. Also, Brian the guy who makes them is a nice guy and is active in the NES scene.

I tried something similar for the SNES pad. Its a cheap knock off that will crumble in your hands.

Take Kyle’s suggestion, it will not lead you wrong.

I prefer the concept of ‘use your own controller’ anyhow. I can buy NES/SNES/Saturn controllers much cheaper than I can ones modded for USB. I used the SNES adapter to padhack a third-party SNES controller. Was fun stuff.

Do you guys have a source for legit SNES controllers?

I just go through ebay until I find them

Do you guys have a source for legit SNES controllers?

Only legit sources like kyle said are looking for originals where you can physically see and inspect the controllers.

On eBay you pay a arm, leg and first born child for a original SNES, NES (or what ever console) controller.

I’m planning something similar. I’ve a pair of original (!) SNES controllers around; I want to buy a USB SNES pad, extract the PCB and use it in the genuine SNES pad. My mom’s a SNES freak - it would be a nice gift xD! This way, you wouldn’t have to deal with the crappy quality of the buttons / case…
And yes, garage sales are probably the best places to get original SNES controllers for a reasonable price. In europe, you could also use eBay without paying an arm / leg / first born child xD, but I guess you aren’t in europe…

On eBay you pay a arm, leg and first born child for a original SNES, NES (or what ever console) controller.

That’s sad. I normally pay a buck or two for these. To be honest I haven’t seen a ton of them lately. It was much easier back in the PS1 era. All of this stuff was cheaper then. I think people are getting hit with the nostalgia buck. I never stopped playing old games.

Here’s my favorite SNES controller if you can’t find the original. It’s just like the stock pad+turbo+bitching Famicom colors instead of the USA purple. 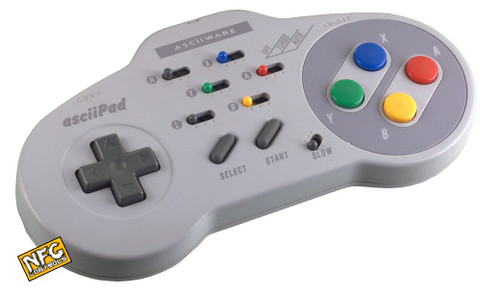 I’d probably go with a Buffalo Classic USB Controller for the price of a converter and a Retrolink. I don’t own one myself 'cause I settled on Saturn SLS replicas for my 2D video game playing needs. It basically has all the buttons I’d ever need, except select and let’s face it, how often does a game actually use select for anything useful and even if I did need select, the saturn controller has more face total buttons than an S.N.E.S. controller, so I can map it to another blank while if the S.N.E.S. controller needs a C or a Z, I’m kinda screwed. That isn’t to say I don’t like the S.N.E.S. controller, heck I’d even prefer it if I wasn’t worried about being in want of more controls. At any rate the Buffalo Classic USB controller seems to be a near perfect replica of the japanese pad except for differences with the D-Pad.

The most notable difference I saw in some disassembly pictures. Unfortunately I don’t think I should give out the link to the thread since the ones I came across was at a somewhat shady looking romhacking site. The only thing of note the comparison pictures showed that the Buffalo’s D-pad is just a cross, while the authentic S.N.E.S. controller had a cross on a hidden disc. Can’t say I’d know how big of a difference that makes. If the thickness of the D-pad itself is a problem as shown on the video, I’ve seen NES controller rebuild/repair kits on ebay that are bundled with a D-pad membrane that might work well as a replacement.

They’re a bit rare and hard to find but I’ve found a place that sells them for 23 bucks, shipped, internationally. By the time you buy an $18 dollar adapter and spend anywhere from 4-8 bucks for an S.N.E.S. controller you’re pretty close to that mark, if not over once you factor in shipping. Granted nothing’s more authentic than the real thing. However if total authenticity’s of any concern for me, I have a real S.N.E.S. with over seventy game cartridges, so your millage may vary on that. The Retrolink’s also much better priced than the Super Smartjoy A.T.M. which I was looking for for some time before SLS controllers hit the market.

I’ve also seen that Buffalo branded Famicom clone controllers. I’d consider getting some but I don’t really have that good of a reason to, since I already have a small handful of Saturn SLS controllers.

If on a budget, I’ve heard generally good reviews about some of Tomee’s products, which only cost a couple cents more than the Retro Motion one you linked. Most notably it concave X and Y buttons, like the original NoA SNES controller. People do argue about whether it’s more like an authentic SNES controller or one of the rather convincing but inferior counterfits that was on the market however. Videos I’ve seen of the buttons make them look proportionally smaller to the controller than what I’ve seen. You’ll see a link to the Tomee on amazon in the related links and it only costs a couple of cents more. It also has plastic buttons.

Speaking of which, if you do use an adapter, don’t buy “New” S.N.E.S. minis or S.N.E.S. controllers in the box unless you know what the fudge you’re doing and preferably, buy anything you get in person if you can. There have been very professional looking counterfits on the market.

Edit: Mixed up which controller had plastic buttons. A small amount of additional information regarding my choice of SLS controllers over Buffalo controllers. Felt I should reference the Super Smartjoy somehow…

I wouldn’t trust them. The reviews for the Saturn pad say it sucks. If you can pony up a little more these are definitely legit.

I have both the NES and SNES USB ports. They work great. Also, Brian the guy who makes them is a nice guy and is active in the NES scene.

Why is the Genesis pad backwards?

'cause it’s a left handed controller. No, not really but that’d be kinda interesting I suppose.

It’s probably a simple mistake caused in part because light travels in a straight line. You’ll notice any controller will look the same way if put up against a mirror. It’s hard to explain precisely how it happens but trace how light has to reflect from the controller to the mirror and it’ll make more sense.

Just as the mirror sees it, is how the photo sensor would see it, so for the sake of simplicity, a picture might not be autoflipped as the photo is being taken. This also allows webcam users to more easily compare their camera’s image directly to a mirror which could be helpful in adjusting their picture quality for podcasts…

One problem with this is that user error may allow somebody to forget to flip the image before they upload it, meaning you’ll see everything in that picture or video backwards from how it would really appear in the real world… I’m sure they’ll correct it if asked.

… either that or it really is a left handed controller.

Why is the Genesis pad backwards?

Look at the other images. It is intentional. The Genesis pad would have to be upside down if it weren’t flipped horizontally.

I always used the SN ProPad with my SNES.

I preferred the Super Famicon color/buttons

I’ve also seen that Buffalo branded Famicom clone controllers. I’d consider getting some but I don’t really have that good of a reason to, since I already have a small handful of Saturn SLS controllers.

I won’t lie. These are pretty legit looking. I still don’t understand the point of using a what is essentially a third-party controller to recreate a childhood experience. I wouldn’t settle but that’s just me. I’ll spend stupid amounts of money on things like this.

+1 for the Buffalo USB controllers.