Numbski's Ball Tops Q and A

How can I make my balls glow like yours?:
http://forums.shoryuken.com/t/my-balls-are-now-even-more-beautiful-to-gaze-upon/49423

How are you doing this?
http://forums.shoryuken.com/t/custom-ball-tops-now-its-a-reality-on-sale-now-discuss-here/19569

Do you have any pictures? 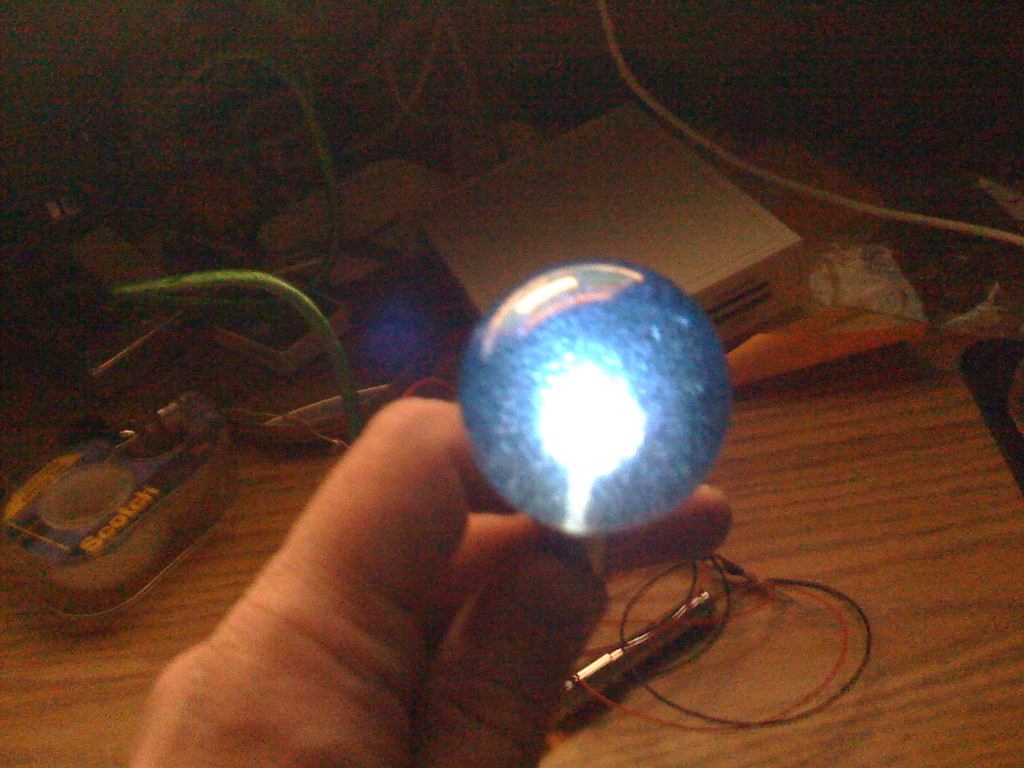 Where have people been ordering?
Up until recently, they just blindly posted here:
http://forums.shoryuken.com/t/fs-numbskis-balls/26221

To be safe, post there AND PM me. If you want to see experiences of other buyers, that’s a great place to look. (Currently nothing is for sale.)

So what’s your “feedback rating”?
Used to be here:
http://forums.shoryuken.com/showthread.php?t=168308

Appears that this forum is now gone.

How much are they, and how do I pay?
The balls used to be $15 US each, and shipping within the continental US is flat rate $4.25 for up to 6 balls. In otherwords, if you buy one, it’s $19.25. If you buy two it’s $34.25. I can cram up to 6 balls in that flat rate envelope. To pay, send the money via paypal to my username at hksilver.net. DO NOT send me payment until I’ve confirmed that I have your order ready to go. I won’t take someone’s money unless I have a ball ready to go out the door.

Looks like I’m going to have to increase my prices should I come back.

So I got this message earlier, and figured that rather than answering the same questions over and over, I’d pull a copy and paste-ism. Enjoy!

Recycled glass. I’m always on the look out for new stuff though. Been trying to find carbon-fiber. Not easily found.

None save the expense. I’ve had a passing conversation with a jeweler about it. I’d thought about doing one out of etched cubic zirconia and offering it up for either auction, or as a marketing ploy at a tournament as a trophy. Haven’t done much beyond dabble with the concept though.

Well, I have a few sitting here that haven’t sold in months. I have a pair of black class with a light chrome finish, and a clear glass. Just waiting for warmer weather to get at it again.

Of course, I did mention that this would be an inquiry about your ball-tops plus some, so here’s that bit. I don’t seem to see much information about LED light-ups with transparent ball-tops, but from what I’ve read, one can light up a ball using a joystick shaft drilled hollow and threaded with an LED. A couple of times, I’ve seen you advertise a seller (Store?) named Luigi’s Arcade that sold pre-drilled and threaded stainless steel joystick shafts. I took a look at their site, and I’m extremely tempted to buy a joystick shaft from them, but I have a few inquiries about their work.

YES. They’re sheer awesome. He apparently has a CNC mill that can do stainless. He makes them either as he gets orders, or just makes some when he feels like. My only complaint is that the diameter of the shafts I bought were ever so slightly thicker than a standard one. He tells me he’s fixed that now though. Trust me, they’re stainless. I soaked one in water for a week to test. No sign of oxidation AT ALL.

No clue - in fact it has never occurred to me. You do realize that LED’s almost never die, right?

Um…so far as I can figure, he’s glued it in. If the LED is dead, I’d just take a pair of pliers, yank the thing off. drop a needle and thread through, then use that the pull the wire for the new one through. So by my estimation not hard at all, so long as you get the right size LED. If you’re concerned, I’d buy a couple of extras from him.

This is something I’d like to take up with him myself. The LED’s that are programmable to burn a specific color are unique and have extra pins. Sparkfun sells them:

Ever hear of a thing called RGB? Red, Green, Blue? How about an RGB LED? These 5mm units have four pins - Cathode is the longest pin. One for each color an

The instructions on that page lay it out. Basically there’s a pin for each color. The harder you drive a pin, the more of that color you get. If you control it using an arduino board (DEFINITELY worth the money) then you can treat each pin just like a hex color (or how you specify colors in html or photoshop, 0-255 or 00-FF for Red, Green, and Blue), and be able to give the arduino any old color you want, and it’ll spit that out.

What he has is one that just goes through a pre-programmed sequence. I’ve been meaning to ask him about these and have never gotten around to it!

On your own. I simply don’t have the volume to be able to do that. I wish. I really need a MUCH better drill press to ramp up production, but I’d have to spend something like $800 for the one I want, plus another $200 for the jig mandrill to pump the water through the bit for me.

Apologies for the huge amount of text here. Thanks for taking the time to look at my questions Numbski!

Hey, no problem. I’d recommend posting this out in Tech Talk though - in fact I may do a copy and paste so that others have the benefit of these answers.

Sexified. On the tip of precious stones… how about starting with near precious?
Say Marble or Agate? I know precious stones would be cost prohibitive, but do you have the tools to actually work with material that tough? I mean, CZ isn’t particularly valuable and is seen as a poor mans diamond, but shit is no joke when it comes to hardness.

Hey, I’m having Kaytrim build me a custom stick right now and I have a Seimitsu Clear Bubble top on the way. It’s being outfitted with a green LED… would it shine more brilliantly through glass? Any advantage to using glass? Also, one more (probably silly) question: Will LEDs shine through the black glass tops you mentioned?

EDIT: Saw a “Meteor” balltop in the trading section… I assume the black glass/chrome ball is similar?

Also, would you be willing to do a clear green glass battop for a JLF? That’s something I’d be interested in! 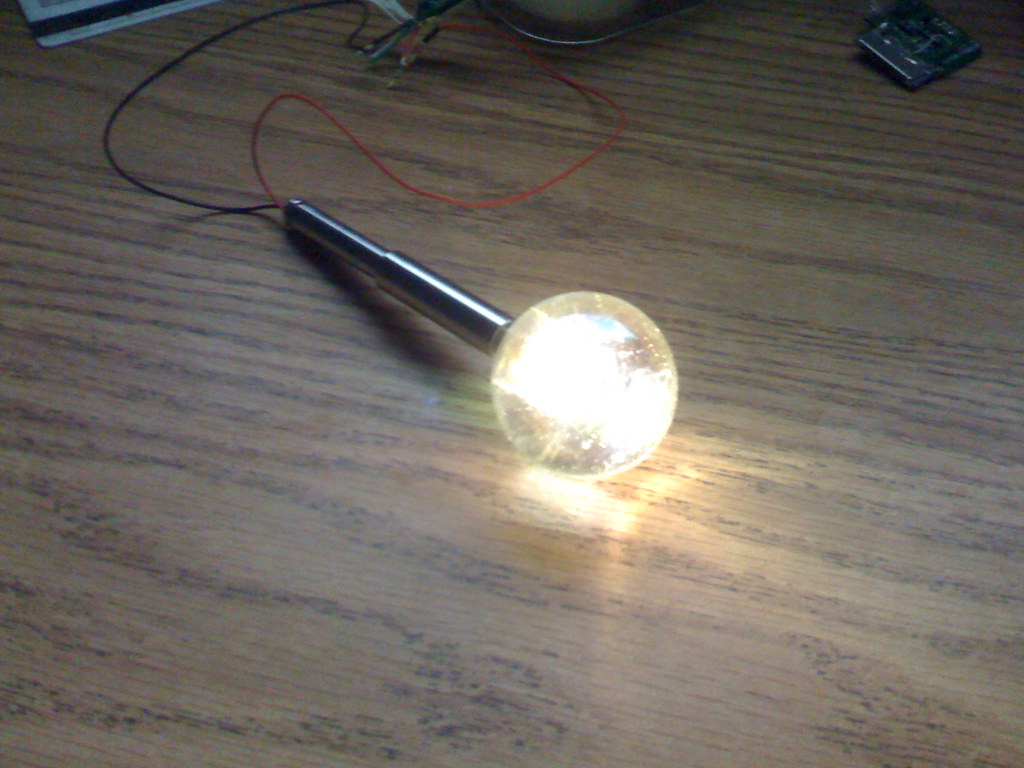 Hey Numbski, just wanna drop in and say thanks a ton for answering my questions about this stuff. I hope Luigi’s Arcade does offer, via special order or otherwise, RGB LED shafts. I have no doubt in my mind that one would get the best possible use out of one of your clear ball-tops with one of those.

To make an RGB LED output a single specific color, and that color only, you can just use different value resistors on the R, G, and B legs. No microcontroller needed, although being able to specify the color based on certain conditions would be cool. If you’re worried about changing your mind down the use, use three potentiometers instead of resistors. Whenever you feel like a new color, turn the three knobs and dial the color you want.

If you want it to be controlled by a microcontroller, I got something coming up that you’ll like.

Someone had to say so here it is, I love this man’s balls(no homo.) But seriously, these things are awesome, definitely makes your stick stand out from the crowd so to speak.

I keep putting off making a page of action shots, general info, and how much it is to buy from me. I guess I should get on that. Specifically I had a guy ask what shades of blue I had (heh), which is to say I have baby blue, and dark blue with a metallic sheen.

Yeah it was me who asked about the blues. I’ll probably be on this once you get that page up, thanks for the response!

Hi, my post count is not high enough to send PMs so I hope it’s okay to ask here. I am very interested to get my hands on one of your hand made ball tops, so I have a couple of questions.

What different shades of reds ball tops do you offer?

Are there any options like a red titanium ball top or a crimson colored glass ball?

When should I expect a requested order to be finished?

Lastly, how can I process my transaction after the requested ball top is finished, via eBay.

I hope I didn’t ask any already-answered questions. Thank you. Hope to do business with you.

where did you find those adapters for the thread inside of the ball top?

Oddly enough, Grainger had them. I did all kinds of searching, only to find I could buy them locally.

What different shades of reds ball tops do you offer?

Only Ruby (deep red) right now. Have a look at my Flickr page.

Are there any options like a red titanium ball top or a crimson colored glass ball?

Not at the moment, however I work in a facility full of HUGE CNC mills these days. I’m hoping to be able to con someone downstairs that uses the titanium mills to do a quick back of titanium bearings for me eventually.

When should I expect a requested order to be finished?

Usually I won’t let you pay me unless I have the ball ready to ship. Typically if I have it on-hand, a week in continental US.

Lastly, how can I process my transaction after the requested ball top is finished, via eBay.

Paypal. The e-mail address is my SRK username at hksilver.net.

Bigtime update to the first post with all kinds of links.

Thank you for thanking the time to answer my questions. I’ll keep an eye out for a crimson glass ball.

Oh and one request if possible. If possible can you shine a red LED on the ruby ball top and take a picture? I’m hoping that it would match my translucent red seimitsu buttons.

I bought a Crimson glass one about a year and a half ago, right after you started. Still like it and looks great.

sorry to bother you about this more, but do you know what the thread adapters are called by any chance? I want to check home depot and see if they have any and try my hand at making a ball top for myself possibly

They don’t have them at Home Depot. Trust me.

alright awesome, i’ll look around and see if i can find some, i’m going to be building a stick for my gf’s brother and i wanted to do fancy wood and possibly a 30 sided dice ball top, thought that would be neat :lol: