Options for having a compact travel arcade modded stick?

Hello !
I’m a nostalgic (amiga) kick-off 2 player :looney: who learned it all 15 years ago on a specific megadrive/genesis arcade stick.

Here is its picture :

I’m taking parts in friendly gatherings :party: where we play the old and addictive game (if you’re interested check http://www.ko-gathering.com/ ) but I just can’t find any buyable stick to my taste that would work on the amiga :sad:.

Since I am quite clumsy and definitely not a gifted DIY man :crybaby: (I guess I could do with the soldering, but the case modding part is definitely where I could struggle) I’m looking for a mod not too hard to do.

To sum it up hereafter are my constraints :

To your knowledge, is there any (not too hard to find new or on ebay) arcade joystick that would fit my requests ?

At first I considered getting one of the two following sticks but viewing this (frightening) mod :wtf: they seem to be too short to host a seimitsu stick without heavy surgery : 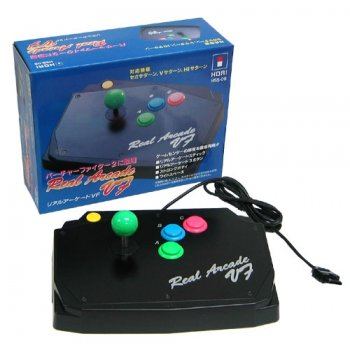 Many thanks for helping me with you knowledge on my quite weird wishes !

I need YOU to regain my Kick-off 2 powers !

I’m currently building two sticks with Sanwa parts. Having never really used a Sanwa before (I’m a Happ man, and I’ve only touched my friend’s Sanwa stick a couple times), I figured there’s only one way to find out which joystick/setup I like the best.

That is to try them all.

So I’ve got a JLW and a JLF, and all 3 possible gates. Square, octagon, circle.

I haven’t finished building the boxes yet, so I haven’t used them, but I obviously went ahead and felt them out of the package and I can tell you right now the JLW is noticably stiffer than the JLF. Logically I’d guess that means the JLW will snap back to center quicker/better.

That said, I’ve never touched a Seimitsu at all, so I can’t compare. But if you do want to go the Sanwa route and want a stiffer stick than the JLF, get the JLW.

EDIT: Another thing… You mention you aren’t the best DIY type of person and might struggle with case-making. If looks aren’t an issue, you can easily DIY a case that’s not too pretty but gets the job done. The first stick I ever built, I had the lumber yard cut the boards to size for me (for free, from free scrap wood!), and all I bought was a drill bit to make buttons/joystick holes with. After about an hour of drilling and screwing together, I had a crude box that wasn’t too easy on the eyes… but played 100% perfectly fine, which is really what matters in the end. =p

Your portability requirements make me think of CigarBob’s cigarbox stick. You should give it a try just for fun. Buy a sanwa or seimitsu stick you want and some buttons, take the stick to a tobacco store, buy one of their empty (WOOD!) boxes for cheap (local cigar store asks $2 for empty boxes) making sure there is room for the stick, borrow a drill, and throw it all together. If you mess something up, you just lost the little money the box cost and still have the parts.

If you ended up getting it right, and got good at removing the e-clip, you could remove the stick shaft, dust cover, and console cable to store inside the box for travel.

I can’t stand cigars, but the boxes smell awesome.

StreetSkiver, I’ve been looking EVERYWHERE for information on how the Amiga CD32 pad operates for my Universal PCB project. Do you have any information on how it works, or any pictures of a disassembled one? If I could get good pictures of it, and if it uses standard logic IC’s, I can figure out how it works, and you guys wont have to dismantle those rare gamepads anymore.

Thanks for your answers guys.

I live in France and it’s like in the US I guess : it’s not that easy to get hold on arcade parts.
Well, well, I guess I should order parts first then think it over… I guess we are all impatient :wgrin:
Building an ugly but functionnal wood/cigar/box seems like a good first step, it’s only ironic to think at the price it would cost for such a result (arcade parts to be bought on the web + postage, DIY tools to buy, soldering equipment, wires, a genesis pad, not to mention running all over Paris to get it all)…

… so it makes sometimes wonder if I would not better bribe some custom stick maker, I guess I could have some discount considering the number of buttons

I’ll see it over when coming back from holidays :wgrin:

Still the main question of my initial post has been unanswered and I’m looking for an answer :

In what commercial joystick box would a Seimitsu Stick fit in (apart from HRAP)?
Would it work in one of the two I posted pictures of in my first post ?

You could try some European stick builders. I think DH020 and Laurie are in Europe.

From the “frightening mod” thread the OP linked to…

This picture brought me great joy.

The caption translates roughly to, “Look how all pretty he is!” 
pretty simple. the base is made of the lower half of a project box, while the top is made of two layers of acrylic. the bottom layer is where the sanwa is mounted (screws countersunk and hotglued) and the top layer protects the art. it measures about 20cm x 14cm x 2.5 inches. just about enough to fit all the parts and two hands.

edit:
re: relatively portable commercial sticks that fit Seimitsus
off the top of my head:
Hori fighting Stick PS
Hori FS SS
Hori FS 2
Powerstick 2
Virtua Stick for saturn (might be too large for you, and the button holes are a little smaller than 30mm)

i haven’t tried modding the VF sticks i have yet, but it looks like both will fit Seimitsus easily. i will have to measure them first.