Paying to win and other crap

Got a spare 40 minutes?
Personally I hate FPS games but this was still pretty interesting to me-
One of the Battlefield Heroes dev team talks about the drastic changes they made to the title to make it profitable. 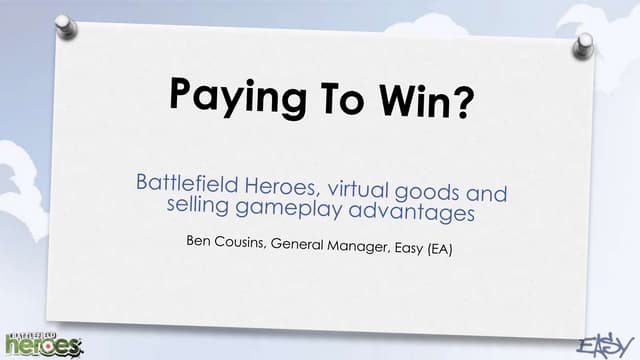 In November 2009, EA hit the headlines when the BATTLEFIELD HEROES team made sweeping changes to their in-game economy and virtual item catalogue that many fel…

The rest of the discussion, in relation to fighting games, is inside the spoiler tags so I won’t give away all the good stuff before you listened:

You missed it.
He’s saying CS2 was free, not the characters.

He wants to know if people would pay for Wolverine if he was DLC because he’s top tier, just so they can have a top tier character? nobody pays for Jill/Shuma because they suck.

I’ll say this again- Everyone who bought BBCS1 basically got the sequel, BBCS2, for free while having the option to buy or not to buy each of the 3 new characters as they see fit.
So the 3 characters “payed” for the sequel but buying MVC3 characters was in addition to paying for the sequel.

After rereading it i see now. It was worded a little odd. Actually if you think about it This is the case with BBCS2. Makoto is top tier and a DLC character. You don’t see millions of Makotos running around online. I see more non-dlc characters, Valk and Platinum more than i do Makoto. The people i see with Makoto are the people who had her in CS1.
Edit: Ok thanks for clarifying.

my primary problem with F2P games is that they ARE NOT free to play. a simple name change to “free to start” or something like that would make me much happier and probably solve alot of the bad sentiment that f2p games get thrown at them.

as far as capcom is concerned or any fighting game for that matter… we already pay for the damned games so, no, i dont want “needed to compete” content to be payed for. costumes and whatnot are fine.

my primary problem with F2P games is that they ARE NOT free to play. a simple name change to “free to start” or something like that would make me much happier and probably solve alot of the bad sentiment that f2p games get thrown at them.

Nothing of real value is ever truly free.
(Unless in very rare cases)

Not a bad topic or anything… but MvC3 is a bad example cuz the dlc was ass.
Look at league of legends… they charge people like 10 bucks per character, most of the time the new characters are broken!

I think selling power is a pretty easy way to alienate customers, actually. One of the things that drew me to League of Legends was that you can’t blatantly buy power the way you can in a game like Battlefield Heroes. Sure the champions are broken sometimes, but it’s usually not as often/bad as people make it to be, you aren’t required to buy them with actual money, and the problem champions are usually reigned in fairly quickly. Sure a lot of people are willing to buy power and get easy wins in games, but a lot of players just won’t put up with that. Unless I misunderstood what I saw of that presentation, then LoL has about 1.5 times the player base of EA’s entire Easy division without selling power, and I think that says a lot about how players feel about those types of business models.

Going back to your MvC3 example, one of the most common complaints since its release has been about its imbalances. I don’t think anybody really likes fighting Dark Phoenix, and Sentinel got hit by the nerf bat pretty early. How unhappy do you think people would be if the people using those characters had gotten them because they paid $5 for them, and Capcom had broken them intentionally? People notice when companies do these greedy cash grab things, and I think it definitely hurts them in the long run. People noticed when Activision starting making 5 new Guitar Hero games a year, and that’s part of the reason that we don’t have Guitar Hero any more. There are already a lot of people complaining about Capcom making a new Street Fighter 4 every year; imagine how people would feel if they were intentionally breaking the game with DLC?

Also, I think there’s a difference between selling power and intentionally selling power. There’s a chance that a character, like BB’s Makoto, could end up being DLC and top tier. It just happens. If the character winds up being so strong that it’s a problem, then they can always reign them in with a balance patch and remove the whole “buy this to win” situation.

Would they be tournament legal?
This goes back to the old Guilty Gear rule of “not in arcade version= not legal” but I don’t know how it’s like in the SNK community.

Did people buy Makoto when they figured she was top tier?

Are people who play [game] competitively buying all characters anyway?

This F2P garbage is ruining FPS games. Why the fuck I have to pay money in real life or level up to get good weapons? That’s why I don’t play MMOs in the first place…

not gonna lie…that kinda worries me a bit…but your other post did somewhat clarify how the scene will react.

at this point, imo, banning console exclusive and dlc chars is plain stupid, it doesnt matter if they are top or not
the only reason why i could even consider it valid is if the char is exclusive for one console (Cole on sfxt or kratos on mk9), or that said char is utterly broken (ivan ooze broken style)

Look at league of legends… they charge people like 10 bucks per character, most of the time the new characters are broken!

A new Champ is usually 975 RP, which is ~$4 worth of points, however you can also buy any champion with the IP you earn for playing the game so that’s not in anyways a ‘pay for power’ situation. You can trade IP for everything except skins in league, so it’s not really a valid comparison; be cause you certainly don’t earn MSP for playing marvel. And most of the new champs are being made horribly underpowered lately, then they try and buff them up to par.

As a tournament organizer I’m all for banning DLC characters, I’d even like to ban characters you have to unlock, it’s a major pain to get all the additional money to make sure all the consoles have the DLC, and even that they’ve all got all the characters unlocked on them. nothing pisses me off more than having to spend $50 just so jill can be on the character select screen for no one to pick.

i hate to say it, but i told you so, enjoy, mugs