Ok, before the haters start to bash the thread, let’s analize the new DMC case:

For those who don’t know, the guy on the left is Tameen, the producer. Yes, he replaced Dante with himself, Capcom agreed, no “battle director” interference. Looks like the producers have enough freedom to do what they want, and i don’t believe Ono can’t add Mika if he really want her like he say, but i will not talk about Mika or specific characters. Just look at this: 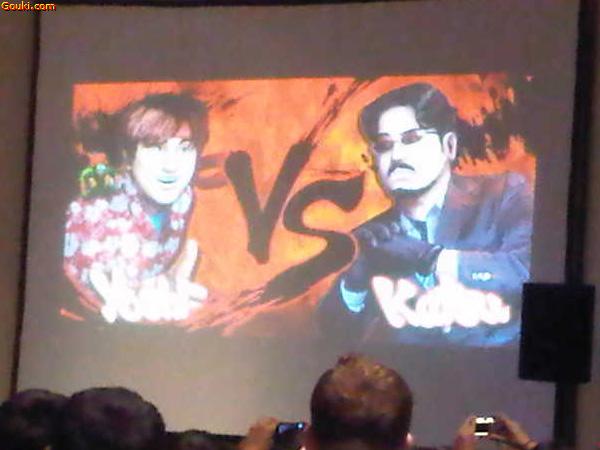 Yep, boosted ego producer on Street Fighter x Tekken too. Sometimes people rant about this or that character not being added, and some of the most popular requests are Alex and Karin, so, maybe these characters are not in the game because the producer don’t like them, even with a lot of fans requesting, and why the producer’s ego or tastes are more important than the fans? Not saying that they can’t have their preferences, but the game will be released on the world, not just on the producers closet, so, the fans must be the priority.

I don’t know if people will understand my point, because i’m not a Capcom fanboy, and i can see the negative aspects of what is happening these days, and a fanboy can’t. Not want to make this a flame thread, everyone has the freedom to ignore subjects that they don’t like. And if we get Bad Box Art Megaman and Pacman riding mokujin just because a guy think it’s funny… He says thanks for everyone with a gigantic, colossal, absurdely out of proportions sense of humour that can laugh at his jokes.

While the DMC case is just messed up, that guy should get fired, i think you are taking the whole thing with Harada and Ono a bit too seriously. The guys are just messing around, and basically using it as PR and are not placing themselves infront of fans request. I don’t know about Karin, but Alex is far from being one of the most requested characters, their fans are just loud. Same thing with Jun, i think most people could not care less about Jun, just her fanbases loudness made it seem like everyone did.

Don’t missunderstand me, it would be cool with Alex and a bunch of other characters, but when two huge fighting games like this collide you can’t expect them to add everyone. Alex just happens to be one of the characters on the bottom part of the request scale.

Do you even understand what’s the producer’s role in video game development?

I’ll be closing this thread since it’s has nothing to do with the game itself, but let me tell you this: It ain’t Ono’s job to pick the roster.