Renowned Dataminer X-Kira has uncovered strong evidence for new CAs and new V system for each character. More so, he uncovered that we can mix and match them to create the perfect combo for ourselves.

So ITT, we should discuss what we want from these new tools in terms of our gameplan and in terms of the sheer pleasure of having more power.

For me, there’s no question.

VS2 = Psycho Banish from CVS2, you can charge it by holding it down and it will become an overhead with a larger flaming hitbox. Can be comboed into like Necalli’s VS.

VT2 = tough one. I have to think this through cuz his current one is delicious.

CA2 = A CA that moves him forward fast to contrast CA1; Psycho Punisher is ideal for this purpose. Make it look more cinematically violent than ever. I want a full blown fatality Capcom!

V-Reversal 2:
a) Teleport.
b) Psycho Banish

I should mention that any form of Psycho Punisher CA that gets introduced should be treated as a command grab (i.e. Unblockable).

Hope he gets a VS that´s usefull vs non projectil chars. Also VR could be interesting if he had a teleport that whod change sides, a usefull corner escape move.

What if Bison’s second VT is the opposite of Psycho Power, he stops fucking around with his OPness and fights characters on their “own level” like in the SF2AM. Lasts all round long and his moveset and framedata take some dramatic changes. Less flaming purple glory and more brute force martial arts.

I guess he will probably have a 2 bar vt and an escape vr to maximise variety. I would like his vs to be an overhead to offer new mind games. The best ca would probably be a command grab but I don’t see it happening. Actually, I see more something like the return of psycho crusher as a ca, psycho canon as a 2 bar vs and a 2 way teleport as a vr.

This really only leaves us with Psycho Punisher. As a command grab CA it is the best option, especially if during VT he teleports right next to you and impales you. 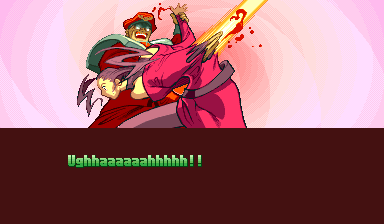 With SF5’s engine, we could be in for a TREAT.

Capcom already experimented with giving Bison a command grab in Omega mode, perhaps it wasn’t all just a coincidence.

This place will become your graaaaaaaaaaaave!

Cmon that Ultra was nice

This place will become your graaaaaaaaaaaave!

Cmon that Ultra was nice

Sure but just that part, and mostly just in Japanese VA.

Psycho Punisher is more in line with the cruelty and brutality one would expect from Bison.

To be honest, I love the new beefy slow as fuck Bison, but it would be cool if he got access to some of his classic shit. Teleport would be really cool, even if I’m not sure what it should be. Probably a reversal, but a sort of Nash-esque trigger would be cool too. Psycho Abortion was always super dope even if it’s technically not classic. As for the skill, I’d just like something that wasn’t useless. Maybe a Dhalsim-style float to help with poor walk speed and floaty jumps?

What I really wanted. Ideas taken from story mode (from his battles vs ninjas).

V-Skill 2: Float like Dhalsim.
V-Reversal 2: F+PPP .Teleports behind and Kicks. F+KKK teleports away from opponent.
V-Trigger 2: Creates a barrier that paralyzes enemies. Can be done multiple times like Bombs and Aegis.
Critical Art 2: Teleports behind and Impales, then explodes (Psycho Punisher)

I can’t think of a VT that is more awesome and unique than current VT. But for contrast’s sake, I think it should be:

2 bars
a special VT rather than an timed gauge that grants bonuses.

This will be hard to do because Bison’s current non-VT form is balanced around him having a VT. I can’t think of a way where he can have a second VT without rebalancing his non-VT form to accommodate it. It’s kind of like giving Necalli or Akuma a second VT, it will be difficult - perhaps even impossible - without rebalancing his numbers and framedata.

The only barrier that is applicable I think is something like his Psycho Explosion from the VS series. Bison basically generates stationary Psycho Spheres, like laying traps, and these would explode much like his EX Psycho Blast but huge.

Still it’s a little too similar to Ibuki’s bombs and Urien’s Aegis.

A free flight VT could work and is technically unique. Especially if it had 8 way teleport dashes. Full anime mode, but again I’m not sure how that will give him a “comeback” factor that equals current VT. Like you said, a levitate type ability is more suited for a Vskill but with more freedom of movement and more command normals from it.

A fun VT is a 2 bar install VT that makes his normals do chip damage and increases the chip of his special moves, also super does more damage, it will have a faster activation than the VT he has now and the VT takes a while to drain since nothing you do takes away VT bar, make it last 30 seconds.

Command normal that banishes projectiles, can be comboed into/out of from other normals/to specials, can be charged to become an overhead.
**
V-Reversal 2 - Psycho Warp**

Bison warps out to the opposite side of the screen, trash talks and/or laughs as he leaves you behind.

Horizontal-body projectile command grab. Goes through projectiles. Very fast flight time. Teleports near instantly next to opponent during active VT1. Cinematicaly, looks like the closest thing to a Fatality SF can get to.

@Daemos I like those, hope they make something close to that.

I would like his vs2 to be like urien’s vs1 : armor on charged moves. Could totally happen, nothing broken, and it would help Bison tremendously. I don’t want Bison to become a cheap, stupid character like the actual top tiers. And on another topic, I really think they should either buff his walk speed or his dash cause right now having the slowest walk speed AND a 22f dash doesn’t make any sense to me. I don’t know what you guys think about that…