Seek a way out! 999: Nine Hours, Nine Persons, Nine Doors for the NDS 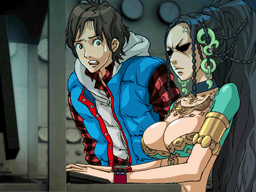 999 is a Novel video game in a similar vein to the Phoenix Wright series and its spin-offs.
It is developed by ChunSoft and published in US by AKSYS.

Story-
Junpei, a normal college student, suddenly finds himself along with eight other strangers involved in a deadly conspiracy he could never have imagined. He wakes aboard an old cruise liner. Dazed and confused, he stumbles around the room he finds himself in, trying desperately to remember how he got there. The first thing he notices is a number, scrawled across the door? A bright red number 5. As Junpei?s memory returns, his mind is filled with the image of a mysterious figure in a gas mask, and their haunting words: ?You are going to participate in a game. The Nonary Game. It is a game?where you will put your life on the line.?

Having recently beaten this game I gotta say that I was VERY impressed by it mainly
]the themes that the game revolves around.[/spoiler

One thing to note is that the character designs are by Kinu Nishimura, who did the Capcom groove character art in the Capcom vs. SNK games.

If anyone’s having trouble getting through the game, this can help out with beating the game 100%-
GameFAQs: Nine Hours, Nine Persons, Nine Doors (DS) Story Flowchart by Sataaa

EDIT: Oh and if you’re interested, feel free to vote who your fav. character is =)
http://www.aksysgames.com/survey/index.php?sid=25342&lang=en

I forgot about this one, I’m definitely gonna get it. looks good