Spawn confirmed as the bad guy…

From the new "Stand" series at Marvel event to DC's "Blackest Night" comics cavalcade to the reveal of the mystery villain behind "Image United," CBR brings all the news from one of the biggest mainstream comics events of the year. UPDATING

of Image United, the Image crossover written by Robert Kirkman (Invincible, Walking Dead) where each creator draws his own character(s).

Jim Lee is rumored to work in it in some capacity as a surprise.

Various Image characters will appear, drawn by their regular artists (for example, in the Preludes running in Dragon, Witchblade, Spawn and Invincible, Invincible’s Doc Seismic appeared, drawn by Ryan Ottley.

Preview cover art and panels of your favorite comic books and graphic novels before they’re released, plus, get full free issues of new releases online!

Courtesy of Image, CBR presents brand new pages from the upcoming "Image United" series, including the first ever appearance of Marc Silvestri's all-new character, Barricade, and Badrock Vs. Overtkill by Liefeld and Mcfarlane! 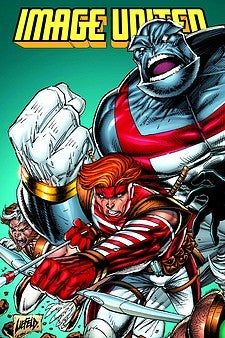 THE CROSSOVER EVENT OF THE CENTURY IS HERE! The heroes of the Image Universe are united in order to fight the greatest threat the world as ever faced! You can't miss this historic event as the original Image Founders draw all the characters they made...

id feel so sad having my character drawn by liefeld

id feel so sad having my character drawn by liefeld

You’re right; Moore is definitely better. Liefeld was Youngblood’s original creator/artist, so he does have some kind of right to it. Sadly, this is how it goes.

I’ve always been a huge fan of Todd McFarlane anyways. I’m glad he’s actually doing Spawn, else I’d have to pull out some cans of whoop-ass. This seems pretty interesting so I’m going to definitely pick it up whenever I get around to a nearby comic shop once it’s out.

HA! Teaser image is using that old Spawn Timer the comics used to have. I haven’t seen that thing in years! About time that thing ran out. Joint’s been counting down since 1992. :clown:

We got this teaser from Image Comics warning of a coming evil, and are sharing it along to you

Spawn’s new look (the evil one - the “good” Spawn, Jim, has the original look) and interview with Kirkman:

The former Spawn rises from the great beyond - again - in Image's upcoming crossover "Image United." Writer Robert Kirkman spoke EXCLUSIVELY with CBR News about Al's turn for the worse and what fans can expect from his resurrection.

Spawn’s new look (the evil one - the “good” Spawn, Jim, has the original look) and interview with Kirkman:

I’m really anxious to see the return of dear Al Simmons. I don’t care if he’s gone to the dark side; that’s what is going to make this story more interesting. It’s nice to know that Jim will be in Issue #2 too. That confrontation is going to be amazing. I’m glad it’s not just going to be the typical comic meet-up …at least, according to that interview.

he STILL Can’t draw a fist holding anything. It always looks half assed. Anybody holding a bow the way that it’s portrayed in the picture, would not be able to draw it, as there is no way you’d be able to maintain enough draw on it to keep it taut.

The fact that Rob Liefeld can still find gainful employment as a comic book artist has to be one of the most hilariously puzzling things ever.

**"*The artist (Jim Lee) was asked if he’d be involved in “Image United,” the upcoming Image Comics crossover miniseries that features artwork from Image founders Erik Larsen, Rob Liefeld, Todd McFarlane, Whilce Portacio, Marc Silvestri, and Jim Valentino. “I’ve been talking with them about being involved somehow, but there are certain hurdles I’d have to jump to make that happen,” Lee said, hinting that his status as the WildStorm chief could hold him back from getting involved in the project." ***

The WildStorm founder and acclaimed artist spoke with fans about all things comic books, including where he thinks the industry could be headed in light of the formation of DC Entertainment and Disney's pending purchase of Marvel.

Really nice! Hopefully he will be envolved in the project a lot more than just doing covers.

This alone is worth cover price.

Live Image United panel on November 25th to coincide with the release of the first issue.

This alone is worth cover price.

WTF are Stryfe and Lobo doing in that comic?

WTF are Stryfe and Lobo doing in that comic?

Well it is a crossover.

Rounding up our pre-interviews is the creator of SPAWN. This is it, the last step before our landmark chat

Online chat will be up on 'Rama tonight at 7:00 PM Eastern. If I’m home by then I’ll give it a listen.

Did you read the Preludes (on Witchblade, Dragon, Invincinble and Spawn), Sano?

I’m loving the stuff. I actually liked the Preludes better than the 11 pages of issue 1 that i read (in the Preview convention comic).