i heard its gonna come with the legend of chun-lee movie since they have so many on the shelves that never sold or got rented lol… and and i dont want another gay girlie figure, i got 360ce so i got viper and i am embarrased to own it. give me something cool like one of those joystick keychains!

I gave my friend my Viper figure, since he was so hyped for one. When he saw how shitty it was, he just stuck it on the dash of his car. I think it’s still there 7 months later.

The movie had horrible quality, but I think it was a halfway decent story (if you loved Ryu or kinda liked Chun, Sakura, Ken, Viper, Cammy or Guile). It would be nice if they went into a little bit more depth about what the hell happened after SF2 though. That would be really nice, actually. However, I don’t care if they do a DVD, if it’s gonna be shitty quality.

The sound track would have been nice if it had the bad ass Ryu theme that was ALL over the place in the game… But it didn’t… That was my number one disappointment. I only listened to the damn thing once. The little manual thing was laughable. As a Ken player, I was offended that all the characters were facing their rival except Rufus, who was doing his combos on Ken instead of Ryu. WTF, capcom?

What else did we get? Oh yeah, the Brawler pack. I DLed it, but don’t use ANY of those characters (Though I was gonna use Abel, so I didn’t think it was so lame at the time).

Anyway, rather than bitching, I’ll put in my two cents.

I think the CE version should have on disc extras. Free costume DLC OF YOUR CHOICE. Why the fuck would I want the costumes of characters I will never play. They better not do that shitty pack thing again. They should let you pick… But that’s a side complaint, I suppose.

If we have to have some fancy packaged stuff, then a “Making Of” DVD would suffice.

In fantasy land, though, I would be picking up a pair of the MAXIMUM Pants and wearing them to work with my orange tie I never have anything to match with.

I’d rather have them not spend the money and time for making another mediocre anime that no one gives a damn about and have them include something useful like tutorials or top player matches.

I can understand tutorials, but how would they put videos of top players? If supposedly Capcom isn’t even going to release this in the arcades?

I want a tiger uppercut straight outta the BOX!

Yeah, you need one of them stress balls with some kinda character’s head on it, don’t care who, a how to dvd for every character, kinda like the thing they did for the blazeblue game. A BEAUTIFUL art book. OOO and come to think of it, maybe a inflatable beach ball, with every character in the game on it? eh?

OOOORRRR maybe be like tekken and offer a fightstick, although I already have one, making me not want it, wouldn’t it be nice?

I’d settle for artbook. But don’t know if I would actually dish out for a CE.

How about a freaking TE arcade fightstick with custom art in the CE, or better LE! Something like the Tekken 6 bundle, but with a TE stick! Or maybe not…

I do like that SF4’s collectors had the normal case for the game. I can’t stand having to use a case that doesn’t match up on the shelf. I hope they do the same for this CE.

I like the cover art, but I also really like the flip side of the cover that looked like this…at least mine did, Idk if it’s any different for anyone else’s cover art 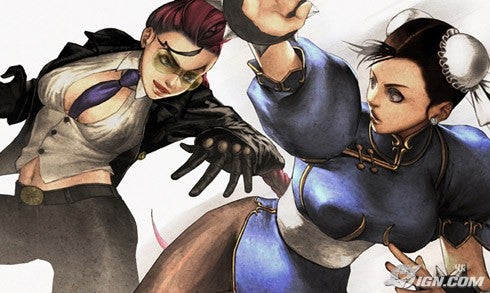 OST is nice, Art book, nice-sized figurine would be nice. Assassin’s Creed II, anyone? Anybody wanting a combo dvd, there’s a trial mode for a reason. But maybe some exclusive content…? Special costumes for the CE edition, maybe. Srsly capcom, go overboard with extras/freebies for the CE edition. PLEASE.

I’m open to just about anything. If there’s a CE for it, I’m getting it.

SF4 movie was entertaining to me.

C. Viper was in it. That’s all I needed.

i think we should get dudley pimpin his bently with him it.

Actually, it’d be cool to have a DVD packed with featurettes, documentaries, and pro matches.

If they made an edition that came with a stick, like Tekken, I’d probably pick it up.

I’m all for those Maximum pants!
I wouldn’t mind a Dudley moustache grooming tips book either.

i think we should get dudley pimpin his bently with him it.

Actually, it’d be cool to have a DVD packed with featurettes, documentaries, and pro matches.

If they made an edition that came with a stick, like Tekken, I’d probably pick it up.

Actualy a Vega mask would be pretty cool too, not just to wear but you could mount it on your wall or something. (of course it would have to be sturdy, not just some cheap thin piece of tat.)

Actualy a Vega mask would be pretty cool too, not just to wear but you could mount it on your wall or something. (of course it would have to be sturdy, not just some cheap thin piece of tat.)

Bah, not unless it comes with a claw… both need the special ability to be lost after 13 seconds too.

I want a tiger uppercut straight outta the BOX!

Plus, you might be able to trade it for a f-HK and Ultra!