Over at the online games division of their website, Capcom has announced two new titles for iOS and Android devices, the first one being Street Fighter X All Capcom, a RPG which will pit Street Fighters against the rest of Capcom, with over 500 characters promised to appear in the game. It was also mentioned that over 20 Capcom series will be represented in the game.

Made for the 30th anniversary of Capcom, the game is meant to be a huge celebration of everything Capcom has accomplished over the years.

Beyond the huge number of characters in the game, they also promise a possibility of large-scale 40-man battles, with each side having 20 characters each at their disposal. Below, you’ll find a few images.

While not much is known about the game’s gameplay system yet, it’s clear that they’re trying to make it gargantuan by cell phone game standards.

Hit the jump for a bit more info, as well as a second game announcement from Capcom.

Besides Street Fighter X All Capcom, another game was announced via the same division of their site, entitled Street Fighter: Battle Combination.

Battle Combination uses stages and character models from the Street Fighter 4 series, and you battle it out via the use of virtual cards on your cell phone, dictating what moves your character will do, and also promises to have 5 vs. 5 battles available. Here are some pictures to check out.

Want to know if your favorite character is in Street Fighter X All Capcom? Make sure to check out the official homepage below. 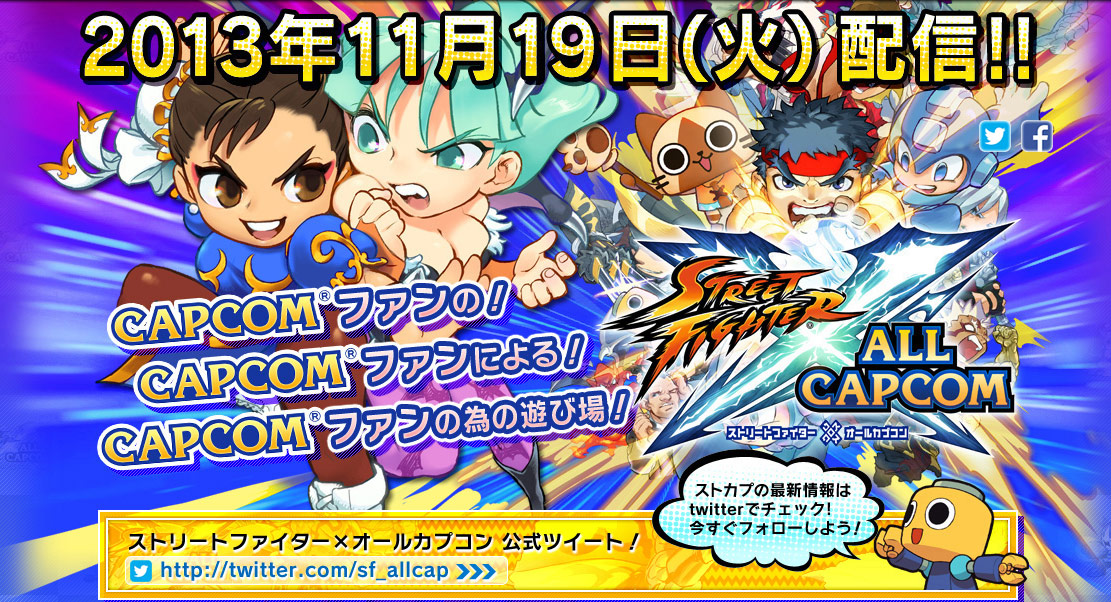 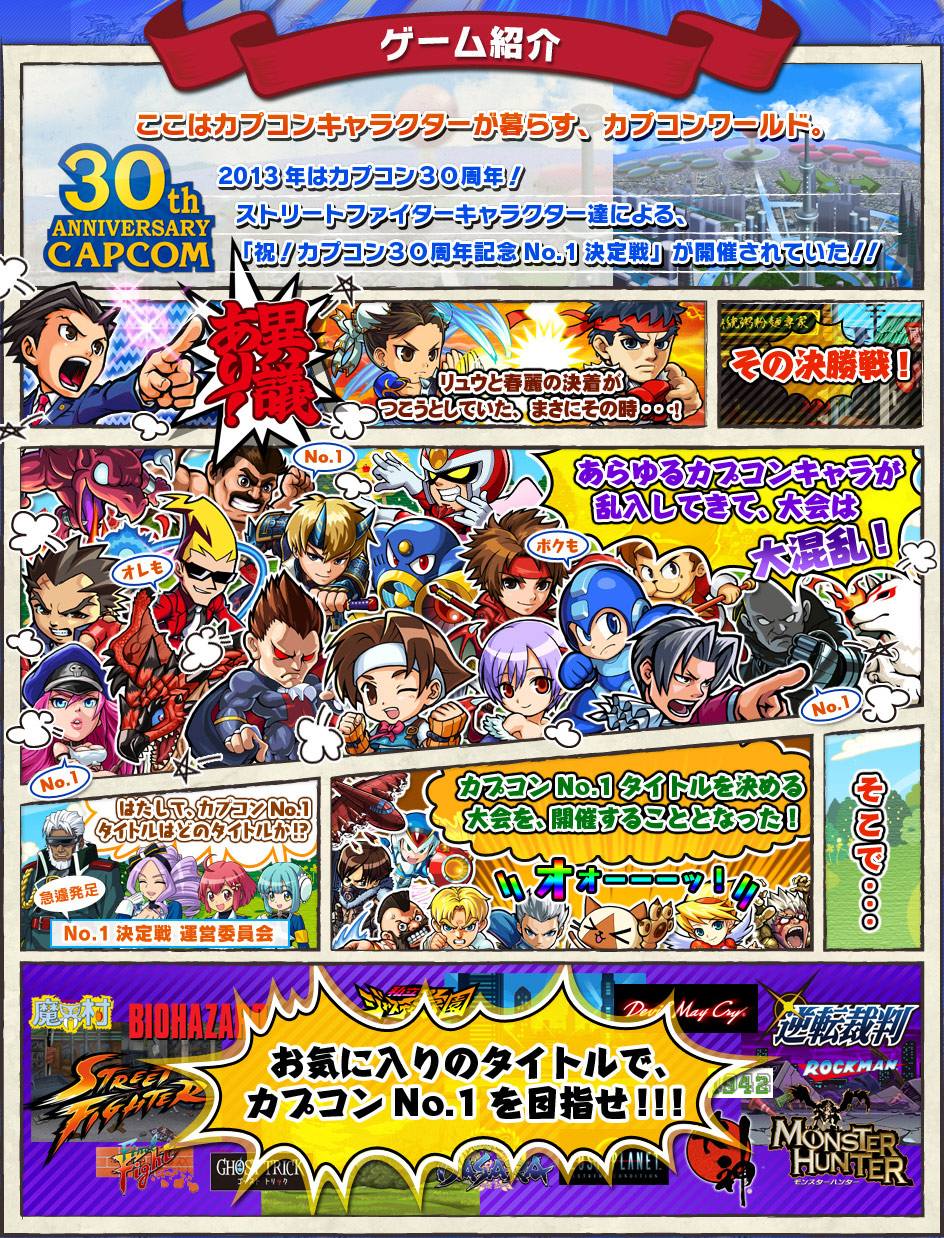 … it is probably just a reskinned Project X Zone.

… it is probably just a reskinned Project X Zone.

You know… I was thinking this… I was sitting here like… Where’s Sega and Namco?

Really should’ve released these on DS and Vita. But maybe if I have a strong enough phone by then, I’ll still cop them

13 new games have just been revealed by Capcom Online Games, including Monster Hunter Frontier G for Wii U and PlayStation 3.

13 new games have just been revealed by Capcom Online Games, including Monster Hunter Frontier G for Wii U and PlayStation 3.

Before you get too excited all of these games are by Capcom’s new online-focused division, so most of them are for smartphones and tablets or are browser-based games.

That said there are some interesting franchises being resurrected here, including a new entry in long running role-playing series Breath Of Fire. Although we’re not sure how hardcore fans are going to take it when they find it’s a browser and smartphone game primarily aimed at Japanese social networks.

You can see the full list of games below but the only console titles are the Wii U and PlayStation 3 versions of Monster Hunter Frontier G, a massively multiplayer online spin-off from the popular series that has only previously been available on PC and Xbox 360 in Japan.

Onimusha Soul might also be console-based, but we asked Capcom UK and not even they knew what ‘consumer game platform’ was supposed to mean. But the title was originally released as a browser-based game last year, so this definitely implies it’s moving formats.

There’s not much we can say about the other games except to link you to the Japanese websites. Although interestingly Euro Historia is based on the Hundred Years’ War between England and France, so you’d think that at least would stand a good chance of being released here.

As Capcom made clear to us though there are no guarantees for any of the titles, and indeed decisions may not be taken until Capcom see how popular they are in Japan first.

What should definitely be coming to the West though is the mysterious Deep Down, which was first announced at the PlayStation 4 unveil in February and has never been mentioned again. Although it’s new footage, the teaser below shows even less of the game than the first time round and it’s still not clear whether it’s actually a Sony exclusive or not.

Their were NO Megaman games announced in that line-up and BOF6 is not on a real system, I can smell the butthurt from here. Delicious fanboy tears lol

And this IS his 25th year… But they’re doing more for SF, it seems.
Unless they have something in store for that Capcom cup.

You know… I can’t wait for the Capcom cup… Know why? Because Harada said he’s keeping TxSF private until it’s over. I really want to see what that game has in store for us.

Harada and Micheal Murray recently did a panel at SDCC to talk about Tekken Revolution. It was...

So assuming this is accurate… Harada will announce TxSF sometime after the Capcom Cup.

Thanks good sir, been wondering what was up with that game for years. Nice to see so new info

I’m curious to know what the 3 projects are though…
Assumingly, TxSF, Tekken Revolution (Maybe, as it’s out already, unless they’re researching the whole F2P thing through it, thus it’s a WIP), and… Tekken 7?
Does he have anything to do with Soul Calibur, or is that something different?

My only guesses are TxSF, Tekken 7 and maybe a new IP since Soul Calibur 5 isn’t that old yet.

Might be the thing that’s set to shock everyone.

if this was another puzzle fighter and it had Sean Matsuda in it, then I’d be hyped.