lol doubt I’ll be watching that.

One to look out for Almost Human staring Karl Urban http://www.imdb.com/title/tt2654580/

Is that the sci-fi cop show from JJ Abrams and co.?

Blacklist was…okay. Megan Boone does it for me. Basically Starling/Lector relationship premise between Boone and James Spader character, but terrorists/spies instead of serial killers.

@thurst
Thoughts on this season?

Did anyone watch The Voice? I just so happened to catch a few minutes of it, and E.G. Daily (Tommy Pickles) was a contestant.

The moment she started singing I said “oh shit!”, I mean she was just that damn good. Looked up her career afterwards and found out how much singing she’s done in the past, sucks she never got any serious recognition in all those years.

Makes me continue to think about how many talented singers go unnoticed, or are mostly underrated by a large mainstream audience.

Watched some of the Thursday night shows on CBS: 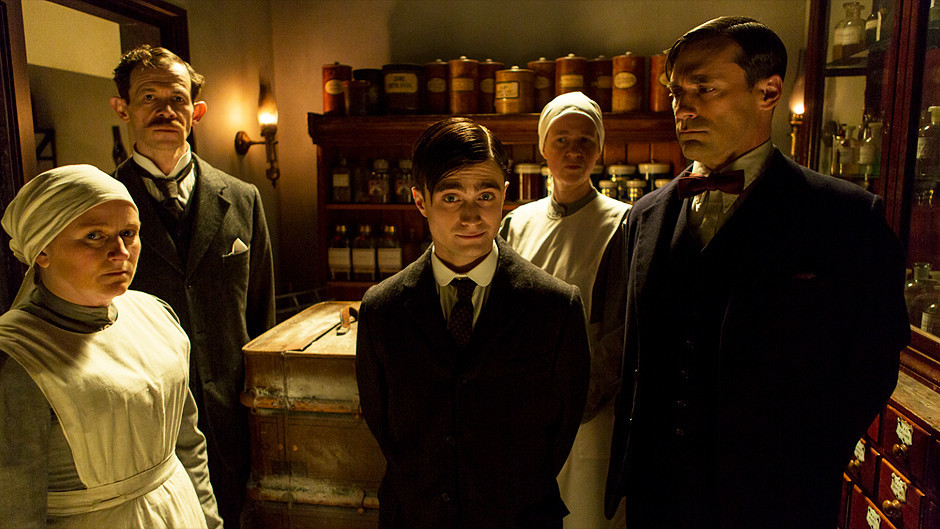 October brings three unexpected gems to TV: "A Young Doctor's Notebook" on Ovation, "Full Circle" on DirecTV's Audience and "The Returned" on Sundance.

"Supernatural" on the CW **Picked up for Season 7** General Discussion

Didn’t know if there were too many other people watching this show, but I saw some other viewers in the Smallville thread. I love this show, its one that my wife and I watch on a consistent basis. Favorite episodes? Worst episodes? Etc. I had reservations about this show when I heard it was produced by McG, but its been awesome. Oh, and in May, DC is putting out a comic entitled “Supernatural: Origins” starring the Winchester dad. Geoff Jones is writing a back-up story in it, too. Intere…

I’m surprised yet pleased that Green Arrow will be a spiritual successor to Smallville…although I was hoping it would be Eric Kripke’s adaption of Deadman.

Thursday, Oct.10
Once Upon a Time in Wonderland - ABC

Talk about the SHOW here and the SHOW alone. I don’t care if you want things to go like in the comics, you don’t mention that shit in here unless it’s in spoiler tags. Spoiler tags don’t work on the skin you’re using? Change skin.

That thread is for ruining Vampire Diaries. Fucking TIS gives a play-by-play of the show as it airs, without spoiler tags.

That thread is for ruining Vampire Diaries. Fucking TIS gives a play-by-play of the show as it airs, without spoiler tags.

lmfao. no one who frequents the thread cares which is this point is just me tis and million. just go in after you see the show…we mostly just talk about the hot girls anyways.

sleepy hollow is great so far. awesome monsters so far too. that demon thats controlling things so far is fucking creepy as shit, great production on that shit.

^ This dude thinks Breaking Bad sucks, I for one don’t believe him when he says a show is awesome.

lol, but it is terrible. i was considering rewatching the series and ripping it apart step by step in the bb thread just for shits and giggles, but its all good, sleepy hollow is still great so far. i thought it was going to be like grimm, which is super wack, and trying to slightly improve, but nah, the first two episodes are creepier then most of anything ive seen in supernatural, and i watch supernatural all the time.

check it out for yourself (sleepy hollow). dont start being mad at opinions like a teenager. breaking bad fucking sucks to me, so what. im not the first person, or the last to think that. shits over now, so who cares.

also, @shaftagent, why dont you like sleepy hollow? i was kinda surprised that harold from harold and kumar is in there.

I was fooling around, I probably will watch Sleepy Hollow but it’s not at the top of my list, I think I’ll just wait till the end of the season and do a binging weekend along with Arrow.

Looking forward watching the Dracula series up in NBC this October.

Jack Bauer will be stepping onto Bond’s home turf - http://www.hitfix.com/news/union-jack-bauer-24-live-another-day-is-heading-to-london##

Production for FOX’s limited series “24: Live Another Day” is heading Across the Pond.

FOX and 20th Century Fox TV announced on Thursday (October 3) that London will be the setting for the triumphant return of Jack Bauer, which is set for summer 2014.

“‘24’ has always had such a global sensibility,” blurbs star Kiefer Sutherland. “But to be able to tell this intense ‘24’-style story with the beauty of Europe’s history and architecture as the backdrop is going to be fascinating. Hopefully, by the time you’re finished watching an episode, you’ll feel like you’ve been there… on the edge of your seat.”

Vampire Diaries and the Originals tonight. I am so girl-excited!

Just finished Orange is the New Black. The season unfortunately ends quite abruptly like House of Cards, but it is easily my favorite new show from the last two years. Very solid cast and a fresh twist on prison comedy with a healthy dose of drama without being heavy handed with both.

^ watched 2 ep the other day. kinda liked it

Also hoping for a new season of house of lies.

I think sleepy hallow is gonna be my guilty pleasure for TV this fall. I like the

I’m pretty excited for season 2 or arrow, especially with the Amanda Walker and Flash episodes