and can someone tell me which is the difference between turbo pad and normal pad ?

Yolu should consider that turbo does not exist when playing fighting games. Never use it, it’s lame and you will be called out for it.

Turbo uses multiple inputs for one button press, that’s all.

Wish I knew how people master the dualshock pad they’re all vouching for. I’ve used one going on 2 years and still get dp’s instead of ultras (yes I understand the motion I need to make) and other nasty screwups. In fact i’m building my own ‘hitbox’ clone now because i’ve finally despaired, despite vowing that i’d master the pad when I first started playing.

Fuck everything that is wireless. I’d go with Fighting Commander 3 PRO or PS2 pad. Good quality and effortless plinking.

This is flat out not true and totally inaccurate. If you use a crappy adapter/converter, yes it will lag. If you use Laugh’s Etokki adapters, there is no lag. They are the adapters that Vangief and Wolfkrone use. You could not possibly be more wrong, sorry.

Again, there is no lag from these adapters on a PS2 controller. You are wrong.

Thank you very much in helping me ! Can you tell me how to use ps3 controllers with my PC? without the need of buying special adapters and equipment,

it’s using the sixaxis controller thing, however, it DOES work with windows 7. its the best and works very accurate to the ps3 itself.

The price for a Xtokki adapter is only $23 on Laugh’s website.

$20 for a DS2 pad plus $23 for a Xtokki adapter is about the same price as a DS3 pad, so it all depends on which R2/L2 trigger buttons one prefers (IMO the DS3 triggers are ass for fighters) and whether or not they wish to use it wireless (the DS3 can work with the proper drivers and bluetooth adapter).

There is no advantage to the PS3 pad, analog buttons are worse for fighters. The adapter is only like $20 and a PS2 controller is like $10. Objectively, the PS2 pad is better. It’s the same pad, minus the analog buttons.

really I would like to play on Ps3 pad but i don’t know which drivers to use… please help me where and what I have to download ?

There is no advantage to the PS3 pad, analog buttons are worse for fighters. The adapter is only like $20 and a PS2 controller is like $10. Objectively, the PS2 pad is better. It’s the same pad, minus the analog buttons.

After my dualshock 2 broke my dualshock 3 had more friction on the dpad so my thumb didn’t slip as much. THough it’s possible i’d just worn the grip off the old controller…

Hands down the best is the PS2 pad. It’s the same as the PS3 pad, but it doesn’t have analog buttons for R2/L2, which makes them more responsive. Additionally, you can use Laugh’s Etokki adapters (100% lagless) and use the PS2 pad on both Xbox 360 and PS3. Both adapters also work on the PC version of the game.

If you only plan to play on PC, use the Xbox adapter. It’s easier to setup (requires no setup at all, just plug it in).

I play on PC with the PS2 pad and the Xbox adapter and they work excellently.

Would this Etokki converter work if I were to use the Hori Fighting Commander 3 PRO instead of a PS2 controller?

Would this Etokki converter work if I were to use the Hori Fighting Commander 3 PRO instead of a PS2 controller?

If your controller doesn’t have a Playstation 2 connector, it won’t work.

I would guess it works with anything that plugs in with a PS2 connector (the wide plastic proprietary Playstation 2 port,** not USB**), so if yours has one it probably will, but I can’t verify that.

First, this is not a flame post. This is not an attack on you also. Before anything, I must state that the PS2 controller is indeed very nice to use. It is comfortable, and it feels a little better than the PS3 controller.

It is possible that it just might be due to a shitty convertor?

I’ve played MANY iterations of 6-button game pads all the way from the SNES days to now, and the Mad Catz Fight Pad is a very overhyped piece of pad. Thanks to one of our dearest forum members being a Mad Catz rep, some of us are blindly drinking his Kool-Aid and misinforming the rest of us. The thing that made me toss my Mad Catz pad was the d-pad’s learning curve. When a d-pad has a learning curve, it’s probably worth tossing away, and I did (well i took it back to BB).

THE BEST licensed PS3 Pad to play SSF4 is… 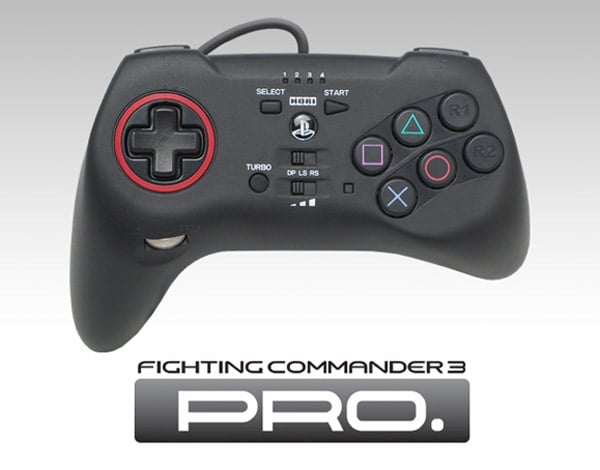 My Hori Fighting Commander 3 Pro. arrived from CD Universe a few weeks ago, and it’s amazing. The d-pad feels great and not floaty like the Madcatz pad. If you can imaging what a hybrid between the version 2.0 Sega Saturn and SNES d-pad would feel like, than this is it. It’s so great, and it’s not even broken in yet!

The face buttons feel great when pressed, with a nice even tension throughout the button pressing motion. Also, the Fighting Commander 3 Pro’s buttons don’t rattle and overall feels like a higher quality pad than the offerings from Madcatz and PDP/Pelican and, there’s no cartoon art on the faceplate, especially since I’m pushing 30.

do they have that commander pro 3 controller for xbox?

Just got the Hori pad and it’s amazing. Recommend it to all pad warriorz.