Ha! Ha! Finally I have my own thread! Othervise, I have strange feeling that nobody else want to make thread for Blanka

I’ve always wondered about why people hate Blanka so much. Is it because Ono trolls with his figurine? I’m new to Street Fighter, but I think he is sort of cool and unique in design. Big green anthropoid? That’s perfect partner for team “Funny Animals” with Kuma!

I guess they’ll change his Electricity to a :qcf: command like Chun li’s Lightning Legs. I can see EX Elec being a good Switch Cancel.

I wonder what his super will be? Probably just Lightning Cannonball. Would be nice (random and unexpected) for them to bring back his Watermelon super from Alpha though lol.

You can’t make electricity a fireball, man, that would be way to good. Hop-electricity pressure could be done flawlessly, by anyone, endlessly.

Hmmm, well maybe they won’t. I guess I just assumed they were changing all Mash moves. Well, all two of them in SFxT.

You can’t make electricity a fireball, man, that would be way to good. Hop-electricity pressure could be done flawlessly, by anyone, endlessly.

I think it would be harder to do for ambiguous x-up hop electricity cos you’d have to reverse your inputs, and depending on what the opponent does you might not even know what side you’re going to land on.

They hate blanka because he has that crazy swag.

I hope he keeps his j. mk from SF4 cause its a beastly cross up, maybe slightly adjust the hit box to make it meaner.

Maybe make df. hp safe at max range to help his footsie game, oh and have it lead to crumple stun on CH.

df. hp is safe at max range but that’s not saying much. he’s my main since sf2 and even i hate him and find him to be one of the most annoying sf characters ever created. he has extreme match ups here and there. it’s sometimes way in his favor or waaaaaaaaay against him.
things that make people hate this character: he’s backwards in many ways. moves you think you can punish on block or whiff are impossible or really hard. moves on hit are punishable though…
his j.mk is retarded good. it’s its own vortex. he needs nothing else in sf4 since his jump is extremely vertical so he can cross you up even if he’s right next to you. everyone else needs to be about a body lengths distance away to cross up or they’ll whiff. not for blankaz.
he can sit on his ass and eat his boogers all day long once he gets a life lead. at this point he can keep you out of the air or stop you from walking forward.
EX air ball is retarded and can only be blocked 1/100 tries. can’t focus it if he uses it as a reversal.
he’s not hard to use effectively imo. he has some hard combos but match ups consist mostly of “should i be more aggressive or defensive?” and nothing really specific other than knowing who can punish blanka balls on hit/block.
all in all, he requires a lot of knowledge to beat, but once you’ve figured him out he’s pretty much dead.

EventHubs readers, RedWaltz79 and Zelgadiszero, were kind enough to provide a transcript for the community from a recent ...

so either they change him so much that he doesnt feel like SF4 Blanka but is a good char, or they totally fuck up and make blanka suck! 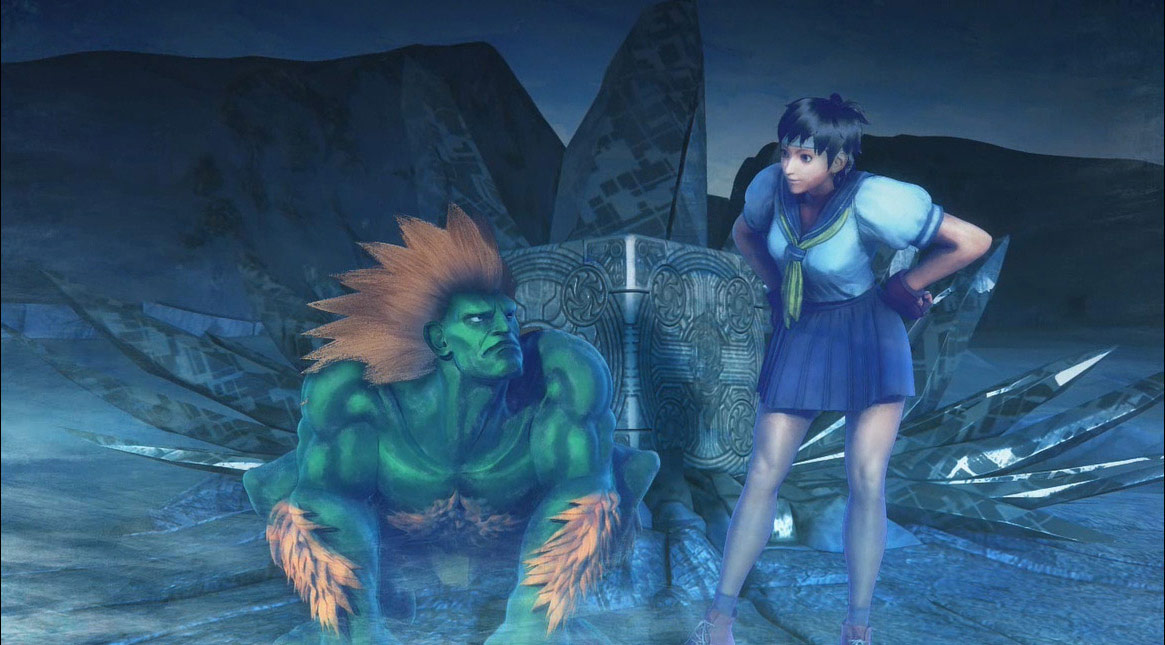 Blanka looks BADASS
okay…the pink scarf…but he just honors the greatest fighter of em all: DAN
so don’t you dare saying something different! HE LOOKS REALY PISSED!!!
hope he finds his bro!

I think electricity will have to be qcf. Because I think Lp, mp, hp is going to be a universal ‘launcher’ combo for all characters (not confirmed). That rules out sliding for jab xx elec, unless pianoed in a different sequence.

I think electricity will have to be qcf. Because Lp, mp, hp is going to be a universal ‘launcher’ combo for all characters. That rules out sliding for jab xx elec, unless pianoed in a different sequence.

i think this is pretty much given, though I don’t like it!
I always thought that blanka doesn’t fit into the game so I was really surprised that he made it!
I think they change him a lot to make him work…and ono already said they have problems with him.

Blanka’s j.mk is blockable both ways a lot of the time in sf4, if they fix that I’ll be happy.

this video won’t be on for long so watch it as long as you can
I try to desribe for those who came to late:

blanka’s super looks ridiculous. I’m not sure what he is actually doing (bad quality), but i think it’s startup is crazy fast
he is doing a hori ball that launches his foe the air, than he charges his elec (is that even a word?) and jumps after him and does some kind of electric izuna-drop. LOOKS SIC!!!
but say goodbye to mizoteru-bomb…
wait…maybe you can do a crossup like you can do with horiball on foe’s wakeup…would be cool

his ball bounceback is extremely short at least on hit (which is good for okizeme) and ball knocks down. unfortunately he does it from a short distance so it could be a fullscreen knockdown (crossed fingers), but I think it’s similar to 2012 edition.
he doesn’t ball on block, but I hope the bounceback is not THAT short on block, because on hit he lands right next to the foe…

he chains cr.LP -> cr.MP
he chains cr.MP -> cr.HK (sweep) and cancels into launcher (that doesn’t hit, of course)
unfortunately this were the only “combos” he does

he does elec twice after cr.MP, but it didnt look like a cancel and it doesn’t hit
so I’m not sure whether he just mashed MP or whether he does some kind of motion…
the animation itself looks different. looks like he has some yellow shining spikes around him…dont like it

he does rainbow roll but doesn’t hit his foe, so i can’t say anything about it

he does some random normals that look similar to SF4

he doesn’t do AA ball

his pic on top of the screen looks ASS

MORE!! Where did you find this…?

EDIT:
WTF? he did random scramble with chars having there movesets switched. there was a girl (dont know here name. tekken char I guess) with blanka’s moveset but this part was just total chaos so I couldnt see anything

13 sec of blanka doing random stuff in the end

^upball after whiffed st.hp… Ermmm…? I know sfxt doesn’t like charge moves but Rog got his. Hopefully that upball is just a beta Blanka move. Also towards the end, non-ex upball knocking down!? Blocked ball lands nearly exactly where it was blocked too, although the pushback/blockstun seemed to stop guy from punishing it, or Guy just didn’t react fast enough? Fastest SF game I’ve ever seen though. Looks like a complete marvel-mash at times.

Btw did you see Blankas ‘Evil Monkey’ pose at the start of the match:

he chains cr.MP -> cr.HK (sweep) and cancels into ball (that doesn’t hit, of course, but doesnt fly over the foe neither…strange)

I think that was a wiffed ‘Launcher’ move, double tapping the HK at the end of the cr.mp, cr.hk chain.

I think that was a wiffed ‘Launcher’ move, double tapping the HK at the end of the cr.mp, cr.hk chain.

and that blocked ball was totally punishable!

Brelston posted a blog over on Capcom-Unity talking about the 12 additional Street Fighter X Tekken characters. He ...

“Capcom has confirmed that 12 new fan-favorite characters will be available as Downloadable Content (DLC) on the PlayStation 3, Xbox 360, and PC versions of Street Fighter X Tekken later this year. The playable characters will make their debut on the PS Vita system when the game is released this fall, with the console and PC versions receiving them as DLC soon after.”

SOON AFTER??? hate these words…fall

okay, maybe that’s not THAT bad for me because I can check out some other chars…