OK, so BOOM! Studios got the license to release comics based on Disney franchises, off the top of my head these titles are/were:
Incredibles (by Mark Waid)
Cars
Toy Story
Darkwing Duck
Duck Tales
Chip n’ Dale: Rescue Rangers

I may be forgetting some titles but those are the ones they published.
I once asked Sano about Disney comics recommendations and his response is informative:

The problem is that most of Donald Duck and Scrooge comics by Barks cost WAAAAY too much money. No joke. His Omnibus series goes for about $100 dollars a volume for 10 volumes! That’s $1,000!!! When Gladstone had the rights they put out a lot of books around the $100 - $300 range too. Oh I’m not making this stuff up…

There’s 2 TPBs for the real Duck Tales, all of the stories the cartoon lifted from Barks’ comics. Those are cheap. I think they still leave out the Glittering Goldie story - Back To The Klondike - because that story is considered a classic that goes for a lot of $$$ most of the time but I’m not too sure if it’s included or not.

There’s going to be a collection by Barks coming out that’s affordable by Fantagraphics later this year. They are shooting for putting out 2 volumes a year and I think they are in the 20/30 range. I’d hold out if I were you.

Don Rosa’s stuff is a lot cheaper. You can get the Life and Times of Scrooge McDuck (eisner winner) and there’s also a second book, a Companion collects side stories from it too - you can jump back and forth between both books to read them in order but it doesn’t matter. Pretty sure Boom just re-released both if you can’t find the older editions.

Gottfredson’s strips (Mickey), I’m not too sure if there’s a collection for them, well I’ve seen EXPENSIVE ones that Gladstone put out (which were not collections per se, the books would cover one of his one to three month long stories IIRC). I can’t see Disney and Fantagraphics not doing a collection for those too down the road.

Al Taliaferro’s Donald Duck comic strip (he invented Huey, Dewie, Louie, Grandma Duck and Gus Goose) has never been collected in a TPB. His strips just appeared in random Donald Duck comics by Gladstone when they had the license (many on the back of their comics too) which is how a lot of people of my generation were able to read those strips. Gladstone wanted to do a collection but Disney nixed it because there was an entire month or so making fun of Native Americans. Strange because there’s more than enough material they can use without that one month, but maybe Disney doesn’t want to explain their omission by just not releasing a TPB.

Hope it helps those that are looking to find some Disney comics.
I’ll update in the future with some more Disney comics and such, but until then, feel free to discuss their titles.

Read the latest issue. One part made me laugh out loud on the train ride home LOL! These easter egg cameos in the background are getting crazier and crazier. Oswald the Rabbit? A GUMMI BEAR! Damn!

Love this series. Looks like they will be doing a crossover story with the Duck Tales comic next. Can’t wait!

Alas said crossover will be, apparently, the finale for the comic since the license expires and there’s not plan for a renewal =(

Awesome thanks for creating the thread!

There’s some updates with regards to Donald Duck and Mickey Mouse comic strips that Boom and Fantagraphics have re-released in the last few months.

In the case of the Donald strip, there’s still no true collection as the strips are scattered. I suspect that this still has to do with the Native American issue, even though these trades come with huge apologetic disclaimers for things of this nature.

There have been three Don Rosa collections released by Boom. One for Uncle Scrooge and two for Donald Duck.

There’s manga based on Kingdom Hearts 1, Chain of Memories and KH2 that are available in English. These are enjoyable reads. I don’t think they ever finished releasing KH2 though.

There’s another manga based on the Disney Princesses, which came out a few years before the current Disney Princess phenomenom. It has a funny title so I’ll have to look into it.

If you can track down Greg Weisman’s Gargoyles comics they are excellent. They retcon the horrible third / Saturday morning season out of existence since Greg had nothing to with that season.

Links where you can buy most of the stuff I’m talking about in a few days. Currently very busy.

Disney Princesses manga? Why did I not see that one coming? lol.
Will read DW tomorrow along with the rest of my comics \m/

The first Fantagraphics book put out recently collecting Mickey Mouse comic strips by Floyd Gottfredson is called Race to Death Valley. The first book that collects Barks’ works from Fantagraphics is a few months away.

The back door that Boom has used to re-release Al Taliaferro strips is simply by re-releasing books that already contained many of his strips. There’s two books like that so far. Walt Disney’s Comics and stories archives Vol. 1 and Four Color Adventures Vol. 1.

On to Don Rosa’s books. Starting with his Life and Times books and more recent books of his Duck work.

This is the Uncle Scrooge Rosa book I mentioned, but I did forget that it had a Carl Barks story in it too.

From Carl Barks, these two books represent all of his stories that were turned into Duck Tales cartoon episodes.

Like I said there’s manga for Kingdom Hearts 1, Chain of Memories and 2 but I’ll just put a link for the first book and from there you shouldn’t have any troubles looking for the rest.

Yeah that’s the name of the Disney Princess manga, Kilala Princess. I only read the first volume so really can’t vouch for most of it. It’s cute seeing these characters in manga in something other than the Kingdom Hearts stuff I guess. Here’s the first volume, I think it goes up to five or so.

Last Duck Tales was really good. Way better than the previous issues. It was co-written by Brill so I think he’s teaching Warren Spector how to write Disney comics.

Last Duck Tales was really good. Way better than the previous issues. It was co-written by Brill so I think he’s teaching Warren Spector how to write Disney comics.

LOL at this week’s Darkwing! All the Disney cameos still crack me up! Fenton’s mom made me laugh out loud on the train!

Both Duck Tales and Darkwing Duck hit comic book stores next week and that will wrap up the crossover. :tup:

A bit of reflection on the end of the Darkwing Duck comic. In other news NOOOOOOOOO! :crybaby:

Yeah I liked the ending too. LOL at the Epic Mickey Wasteland nod.

The first volume of the Fantagraphics Carl Barks collection, Donald Duck Lost in the Andes hit comic book stores today. Some of the stories I’ve read before but most of them I’m reading for the first time. Having a blast!

Old, slightly off topic but I saw this strip again today after not having seen it for years. I read this in the Village Voice newspaper more than 10 years ago. Original Winnie The Pooh vs. Disney’s Winnie The Pooh. Nothing against what Disney has done with the character but this still cracks me up!

The Darkwing Duck comic book is coming back! LET’S GET DANGEROUS!!! 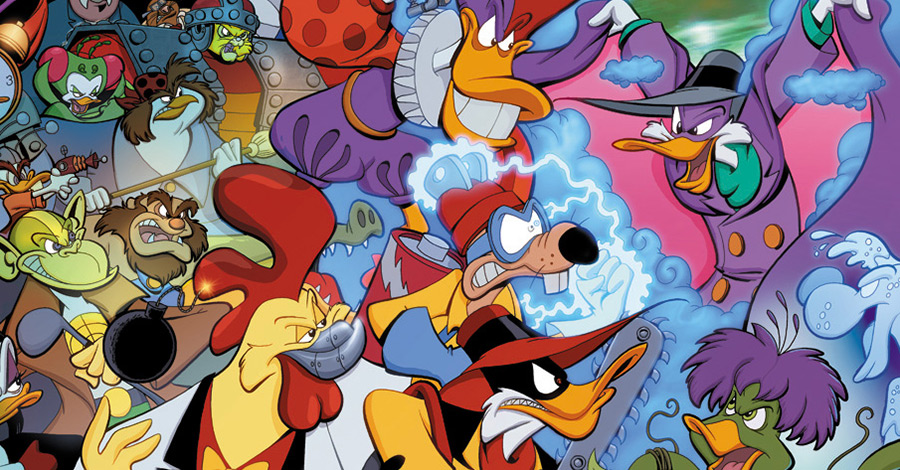 "Darkwing Duck" artist James Silvani has confirmed that the Joe Books omnibus for the former BOOM! Studios series will lead into a new ongoing.

Monthly comics are back… From IDW? Um, okay lol!

Super hype about the Toontown covers!