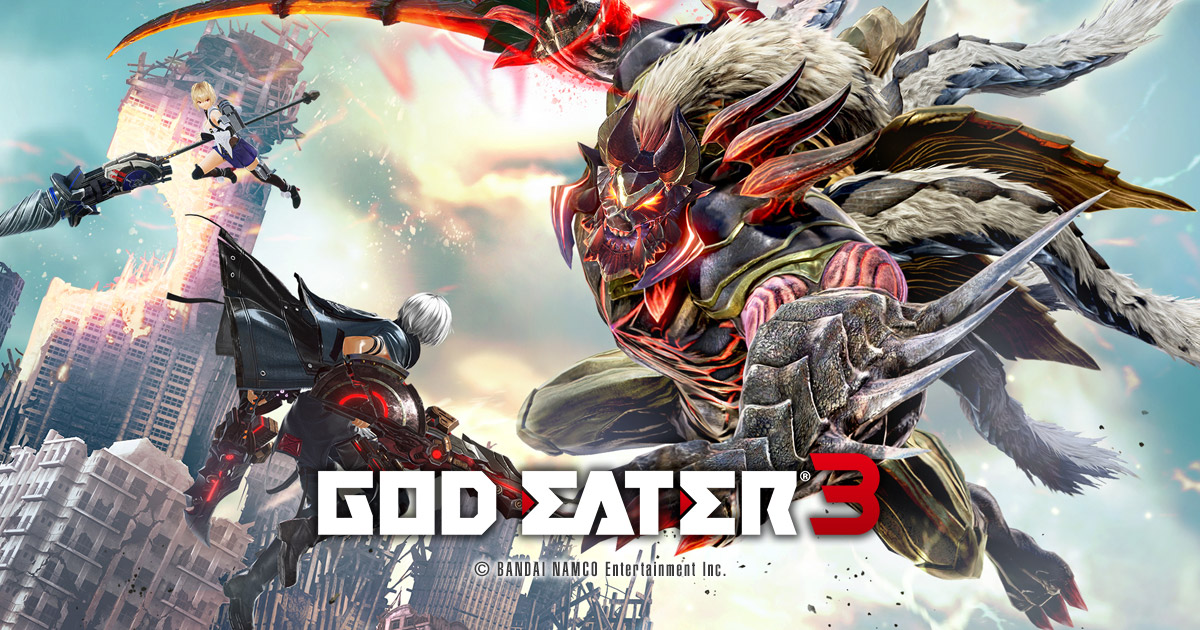 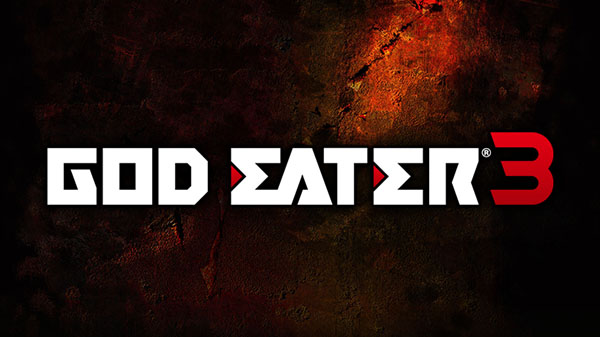 After the successful launch of God Eater 2: Rage Burst, leading video game publisher and developer Bandai Namco Entertainment Asia announces that it will be bringing God Eater 3 that is totally upgraded from last series, the latest iteration of the monster slaying action RPG series. God Eater 3 is developed for home console.

A lot of years have been passed from the last battle. The earth is not anymore the place humans were used to live. The Aragami, terrifying beasts are still raging around the world creating misery and destruction. To save the world and re-establish the balance new heroes has been raised – the God Eaters – men who have been gifted or cursed with new version of the God Arc weapons – special implants powered by Aragami cells. Team up with your other God Eaters to take down monstrous new Aragami that are tearing apart locations around the globe. But this won’t be your only mission, something is happening to the God Eaters and the line between dark and light has never been so thin… It’s time to start breaking free from the cursed shackles that bind the soul of the God Eaters while the battle will rush as never before…

Here’s an overview of the game’s story:

AD 2078 (four years after God Eater 2: Rage Burst).
As humankind continues along its path of decline, a large-scale strategy was announced.

Along with his or her allies, the protagonist, a rookie God Eater, will throw himself or herself into battle in restricted areas. Bandai Namco has announced God Eater: Resonant Ops, a new RPG coming to iOS and Android as a free-to-play title with micro-transactions. Here’s an overview of the game’s story: AD 2078 (four years after God Eater 2: Rage Burst). As humankind...

Bandai Namco has announced God Eater: Resonant Ops, a new RPG coming to iOS and Android as a free-to-play title with micro-transactions. The latest issue of Weekly Famitsu has an interview with God Eater IP general producer Yuusuke Tomizawa, general director Hiro Yoshimura, and God Eater 3 producer Yuya Tomiyama on the newly announced God Eater 3. Get the tidbits below. First, they...

Get the tidbits below.
[list]
[] First, they apologized for the three-year wait since the release of God Eater 2: Rage Burst.
[] After development of God Eater 2: Rage Burst wrapped up, they reconsidered what draws people to God Eater and what players are looking for. By looking at user feedback, they were faced with a situation where what users want is considerably different from the current God Eater.
[] In addition to looking at evolving the series, they explored market potential, including overseas expansion. Both God Eater 2: Rage Burst and God Eater: Resurrection were well-reviewed overseas.
[] They felt that God Eater 3 should return to the feeling first felt in God Eater—the good feeling of speedily fighting enemies.
[] God Eater 3 is set after the events of God Eater 2: Rage Burst.
[] The setting of God Eater 3 is the area around a Fenrir Headquarters. However, the Fenrir Headquarters that existed in God Eater 2: Rage Burst has already collapsed.
[] The world view from previous games has changed considerably, and the positions of the God Eaters have also changed.
[] Development is proceeding with console as the base. It is being developed on PC, and from there will be moved to console.
[] They’re evolving multiplayer to make it more enjoyable to play for the current era.
[] (In regards gameplay outside of four-person multiplayer) It’s possible.
[] The fields are being completely remade.
[] You can move around seamlessly on the field, and areas are the biggest they have ever been in a God Eater game. Fields feel more expansive than ever. There are many fields with differences in elevation, as well.
[] God Eater 3 will have enemies with different properties and abilities from Aragami, and these enemies will devour the player.
[] Devoured enemies will enter a strengthened state, leaving the player in a critical situation.
[] Up until now, the games were made up of “gods and mankind,” but this is vague in the protagonist of the game, who wore shackles on each of his hands. There’s a feeling of Gods devouring each other.
[] In addition to dual wielding God Arcs, new God Arcs different from previous systems will also appear.
[] Outside of that, the game will also incorporate new elements in order to face against formidable enemies.
[] The smartphone RPG God Eater: Resonant Ops is set between God Eater 2: Rage Burst and God Eater 3, but that doesn’t mean you won’t be able to understand God Eater 3 without playing it.
[*] Development is currently 30 percent complete.
[/list]

Bandai Namco has released the English version of the second trailer for God Eater 3, as well as new information and screenshots. Here are the details: Bandai Namco Entertainment Southeast Asia Press Release The Earth is not like humans once knew it:...

I’m actually going to try to play this one. I have God Eater 2 on PS4 but I didn’t put much time into it.

Bandai Namco has released new information and screenshots of God Eater 3 introducing the Ashlands outbreak story premise, new type Ash Aragami, and new God Arcs and systems. Get the details below. ■ The “Ashlands” Outbreak and the Collapse of the...

New, close-range type, dual-bladed God Arc parts. Its turnover rate is top class among all other close-range God Arcs, and by mode-changing into its mow-down form, its battle style also changes.

In its dual blade form, the Biting Edge can attack quickly to catch the enemy off guard with slash attacks and thrusts. Also, each God Arc part’s handles can be linked to transform into a dual-handed God Arc.

While stamina does not recover when the Biting Edge is in the mow-down blade form, things such as strike attacks from swings and jumps have a more powerful turnover rate than the dual-blade form, and are more wide-ranging. Because of this, it is important to properly switch between forms depending on the battle situation.

A God Arc that can fire a “radiation shot,” whose power increases the longer it radiates. As the weapon specializes in concentrated fire on the enemy while changing your positioning, it is possible to move while shooting the radiation shot.

Once the “radiation shot” stops firing, its power resets, so it is necessary make sure of the Aragami’s openings and when to fire in order to master the weapon.

A powerful passive skill that significantly strengthens the player for a short period of time upon meeting certain action-based requirements. Since you can activate Accelerator Trigger any number of times by meeting those conditions, you can continue to activate it in order to continue fighting at an advantage.

A new system that activates when teammates stay close to each other to grant various shared bonus effects. Your “Engage Percentage” will rise as you continue to fight within a certain range of your teammate, and you can activate Engage when this percentage reaches its maximum value.

The “Engage Effect,” which activates alongside the activation of an Engage, differs depending on the teammate, so it is extremely important to ascertain who you Engage with based on the battle situation.

During an Engage, teammates share an Accelerator Trigger’s bonus effect. Because of this, you can fight at even greater strength by each having each character repeatedly activating their Accelerator Trigger during the Engage period.

God Eater 3 will have a new “Heavy Moon” God Arc (weapon) category and new Aragami (enemy) called “Havakiri,” the latest issue of Weekly Famitsu reveals. Further information has not yet leaked from the magazine. God Eater 3 will be released worldwide...

New Weapon: Heavy Moon – An even tougher version of Sun Shangxiang’s weapon from the Dynasty Warriors series. It is both destructive and can hit a number of times. It can transform from its circular moon shape to an ax moon shape.

Several Japanese outlets, including Dengeki Online, Gamer.ne.jp, and Game Watch, have gone up with new previews of God Eater 3 based off the demo being shown at the “Early Hands-On & Development Summit” being held in Tokyo from April 28 and 30.... Bandai Namco hosted a live stream today where it detailed the changes made to God Eater 3 since the game’s last playable display in March, discussed the Custom Bullet system, and showcased new gameplay. Get the details below. ■ Improvements Since the...

■ Improvements Since the Development Summit in March

In God Eater 3, Custom Bullets have been changed to work with using bullet count rather than Oracle Points. It uses a cost system where the more powerful the Custom Bullet, the higher the cost and the lesser the number of bullets you can bring on a mission. The PlayStation 4 version of God Eater 3 will launch on December 13 in Japan for 8,200 yen, Bandai Namco announced. A 9,980 yen first-print limited edition of the game will include a copy of the game, special box, Digipak original soundtrack CD, and...

Mission: “Emperor of the Ashlands”

Mission: “An Invitation to Thunder”

Checking out the Improvements Bandai Namco will release a free, limited-time action demo for God Eater 3 via the PlayStation Store in Japan “soon,” the company announced during the God Eater 3 Special Stage event at Tokyo Game Show 2018. The publisher also shared a sneak preview... Bandai Namco has released new information and screenshots of God Eater 3 detailing recently announced new character Lulu Baran and Aragami False Idol, as well as the Bullet Editor. Get the details below. ■ Lulu Baran (voiced by Ayaka Nanase) An... The God Eater 3 action demo first announced at Tokyo Game Show 2018 is now available for PlayStation 4 via the PlayStation Store in Japan. It will only be playable from October 13 at 00:00 JST until October 21 at 23:59 JST. The demo will let players... God Eater 3 will have a new co-op element called “Assault Mission,” Bandai Namco announced during a God Eater 3 official broadcast today. An Assault Mission is a co-op mission in which eight randomly matched players (which can be supplemented by NPCs...

God Eater 3 coming to the West in February 2019…glad to hear that the English dub is included. God Eater 3 launches February 8, 2019 in the Americas and Europe - Gematsu

God Eater 3 will launch for PlayStation 4 and PC on February 8, 2019 in the Americas and Europe, Bandai Namco announced. In Japan, the PlayStation 4 version was previously dated for December 13. Here are some new details, via Bandai Namco: In a world...