He loves beautiful things, and also himself.
He’s a man like Lord Vega.
Because he always uses strong perfumes
everyone spots him even when he tries to hide.

Due to the influence of a movie he saw in his childhood
he dreams to become an actor.
His excessive self-esteem
led to him taking countless auditions
but he was always rejected due to his personality.
Because he faced financial hardships, he got his hands dirty with crime.
While he now belongs to a criminal gang,
he didn’t give up to his acting career dream, and still cares for his appearance.
His reactions are over the top, and his voice is loud.¹

Just to add a minor blunder, I checked Final Fight 2 for Eliot’s story… And, in the original game, the gatekeeper out of the Hong Kong’s port warehouse was actually Elias. Eliot attacked you from behind only after you had already beaten Elias.

Nah, only Mark is fabulous of the two. They’re saying he’s a beauty chasing narcissist, only he prefers handsome blokes while Vega likes beautiful ladies and his greatest muse, that crimson vixen known for live-giving contributions…Hemoglobin (When I was a kid I thought the term was hemoGOBLIN – cue an image of a maniacal little goblin shooting blood everywhere like those crazy lizards.)

I’m conflicted, all this Final Fight love makes me want a new game, but I dunno how modern Capcom would handle it. :c

Somehow, I doubt the generic thugs had actual individual personalities back when the games were first coming out.

I’m willing to bet the majority of these details about these characters was created just now specifically for these profiles. So while Mark is clearly gay now, I doubt Capcom gave any consideration to his sexuality back in the 90s.

I’m willing to be the majority of these details about these characters was created just now specifically for these profiles. So while Mark is clearly gay now, I doubt Capcom gave any consideration to his sexuality back in the 90s.

He was more of a Guile reference, I think. The added “fabulousness” is entirely due to OnePunch-Man. 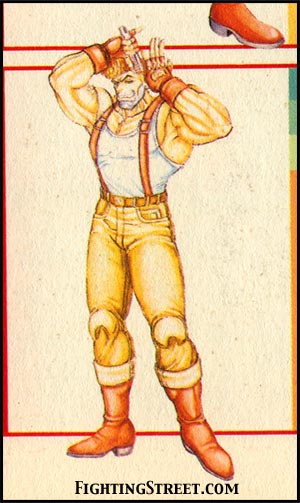 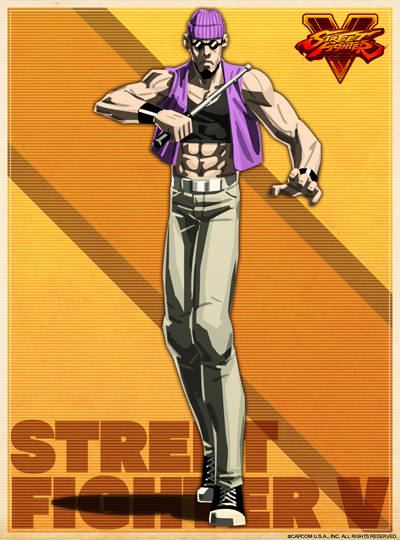 A man who moves quickly and attacks with his metal rod.
He’s obsessed with jinxes and lucky items.
His peers are always uncomfortable when he’s around
because he does fortune-telling and is always right.

Has a characteristic laugh
that once heard will never leave your ears.
His specialty is astrology.
He’s an avid reader with an extensive knowledge.
Also loves housework.
He’s quite taciturn.
…He could be an unexpected indoorsman, after all.

I’m willing to be the majority of these details about these characters was created just now specifically for these profiles. So while Mark is clearly gay now, I doubt Capcom gave any consideration to his sexuality back in the 90s.

He was more of a Guile reference, I think. The added “fabulousness” is entirely due to OnePunch-Man.

Mark is clearly a queen here though. Not necessarily gay though.

Kolin’s Unknown country of origin makes more sense, then – she’s from a fictional Soviet Bloc type country that was destroyed (presumably by Shadaloo)

Another way that she’s set up as the opposite number to F.A.N.G.; both are from countries that were ruined and lost to time.

Why Rose have only two in power? If I remember correctly she is the only person who defeated Bison in a fight one vs one, if there is a female character who can have 5 in power without a doubt is Rose, at least 4. And No, I do not take into account the one whose name should not be said.

I think Zeku’s story might incorporate some of these Final Fight 2 characters, like how Abigail’s story had a few Final Fight 1 characters in it.

So next batch would be FF3 thugs? Glad CFN is keep on going through. I hope to see a Kabuki Fighter in Zeku alt maybe.

And so the jojo references continue

What they added @Daemos to CFN now? You finally made it fam. There is hope for the rest of us.

So next batch would be FF3 thugs?

They haven’t even done the FF3 bosses yet.

The FF3 profile I’m most looking forward to is Black. I thought he was an interesting final boss being a hybrid of many SF characters. He also reminded me of Sagat and Rolento in terms of his look. 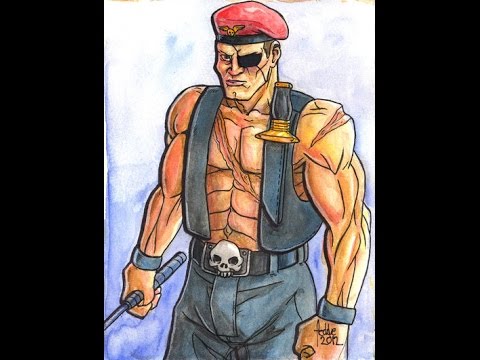 The main issue was he had no backstory other than being a leader of the Skull Cross Gang. I want to actually learn more about this guy.

Is the official art for the Final Fight 3 characters really rare or there just isn’t much of it? There’s art for the protagonists of course but outside of sites like FightingStreet the art for some of the goons seems to be missing.

Is the official art for the Final Fight 3 characters really rare or there just isn’t much of it? There’s art for the protagonists of course but outside of sites like FightingStreet the art for some of the goons seems to be missing.

The SF wiki seems to have most of it that exists. I don’t think they ever made art for each individual pallet swap.

I didn’t even know who the F mark was until I realised he was a generic thug. I hope they don’t drag this shit out, and just have 3 profiles a day on those general profiles.

@DarthEnder I hope you are happy. I’ve been home sick today but I managed to finish one of your requests.

Appearance: Tzilla is a petite but well built woman. She has toned arms and well defined abs. She has short slicked back black hair, hazel eyes, and olive skin. She wears a black sleeveless shirt and beige military pants with black combat boots. Her dog tags hang from around her neck. She has black, fingerless, mma style gloves on her hands.
**
Likes:** Family, Flying, Duty, Sabich
**
Dislikes:** Dereliction of Duty, Shore Leave
**
Fighting Style:** Krav Maga

Tone: Tzilla serious and focused soldier that commands tremendous respect from her comrades. She is all about her job, her duty, and she actually dislikes taking vacations. Her petite build belies her exceptional strength.

Origins: Tzilla comes from a military family. Her grandfather, father, and brothers have all chosen permanent service after their mandatory two year conscription. Tzilla followed suit joining the IAF and becoming a top pilot. Growing up in a military environment, she has a soldiers mindset. Even in her down time, she’s works to get better. Her shore leave consists of logging hours on the flight simulator, practicing her marksmanship at the shooting range, and schooling her brothers in CQC training. During a joint combat operation, Tzilla and her Turkish wingman received a request for aide from the isle of Cyprus. They were both shot down, crashing near Mt. Olympus. While she didn’t sustain any significant injury, her compatriot suffered a broken leg. Tzilla secured a defensible position for him and drew the enemy forces in the opposite direction. She took them out, one by one, and turned her attention to locating the source of the weapon that brought them down. By the time she reached the location, the enemy was already evacuating their forces. She only caught a glimpse of the woman in charge, a blonde woman referred to as “Helen” by her subordinates.

Paralyzer – LP+LK : Tzilla grabs the opponent with a front head lock and quickly elbows them to the spine

Anesthesia – B+LP+LK: Tzilla strikes the opponent in the throat, shifts behind them, and locks in a choke hold.
**
Unique Attacks:**

Disarmed - B+HP: (Hit Grab) Tzilla grabs her opponent and takes them to the ground with an arm lock.
*
Disorientation* – F+MP (Overhead) Tzilla strikes with a quick left handed chop to the neck and collarbone area. Quick startup, -6 on block.

Disabler - MK, MP, B+HP: (Target Combo) Tzilla hits her foe with a left low kick, right cross, and ends the combination by grabbing her foe and taking them to the ground with an arm lock.
**
V-Reversal:**

Stifler – F+KKK: (Side Switch) Tzilla spins behind her opponent, grabs them by the head, and slams them into the ground.
**
V-Skill:**

Anticipation – MP+MK: Tzilla assumes an aggressive stance. If the animation completes she gains a V-Gauge. Interceptor, Immobilizer, and Deflector no longer require a successful counter for full damage.

Unyielding – HP+HK: Tzilla gains a virtually impervious defense and peerless counters. She no longer block attacks but evades them causing her to take no white life damage. A just frame block in this state will allow her to evade a chip damage KO from her opponent’s Critical Art. Interceptor, Immobilizer, and Deflector no longer require a successful counter for full damage. Evading (Blocking) her opponent’s attacks drains her V-Gauge. 3-Bar
V-Trigger
**
Specials:**

Subjugation – HCF+P: (Command Chain Throw): Tzilla initiates a standing arm and wrist lock that can be followed up by three different finishers. Punch button determines the range of the throw and damage of each follow up. All versions start up in 6F and are throw invincible. LP (Most Range), MP(Less Range, Highest Frame Advantage), HP (Least Range, Most Damage), EX(Most Range, Most Damage, Enhances Followups, Neutralizer is hard knock down, Incapactior does more stun damage, Blackout can juggle outside of the corner)
[list]
[] Neutralizer – F+P: Switches to an elbow lock, puts her right leg behind her opponents, and trip slams them to the ground. Leaves her standing next to her foe.
[] Incapacitator - B+P (Side Switch) Spins 180°, back elbows her foes in the gut, flips them over her shoulder, and stomps on their face
[] Blackout - F+K: wrenches her foes arm forcing them to double over in pain, she then kicks them in the face. This causes her fly a short distance away. Juggles in the corner
[/list]
*
Immobilizer – QCB+K: (Strike Counter) Tzilla strikes with a swift low leg kick. If timed correctly, the kick will deflect her opponent’s incoming attack, and she will follow up with a high side kick to the throat. Attack only counters low attacks. Kick button determines the start up time, damage, and counter attack properties. Two damage levels. One for the attack and One for a successful counter. LK(3F Startup, Leaves Opponent Standing, 80/120damage), MK (5F Startup, Knocks Down, 100/150 damage), HK (7F Startup, Causes a Juggle State, 120/180 damage), EX (4F Startup, Causes Crumple State, 130/195 damage, Crush Counterable)

Reasons to be in SFV:

Through hard work and her family’s military connections. Tzilla is able to determine that the Secret Society was responsible for shooting down her plane. While attempting to track down further leads, she’s forced to take shore leave. Not one to give up so easily, Tzilla continues her investigation on her down time. She spots a woman that resembles “Helen” surrounding the festivities of the upcoming World Martial Arts tournament. Her superiors were more than happy to grant her permission to enter the tournament. In their eyes, she was finally dropping her inquiry . In reality, she was only digging deeper.

-Her nickname, “The Flying Lioness” is a reference to her being a pilot and the nickname of the IAI Kfir. Which was known as the Lion Cub.

-Sabich is a pita stuffed with hard boiled eggs and fried eggplant.*[/details]