Welcome to the Flash combo discussion thread. I’m not to experienced in many fighting games and to be honest this is the first I’ve really put time into getting good at. After sifting through all of the characters with general overviews I decided The Flash was my guy. As I’m a noob I’ll do my best but hope this thread becomes at least half successful as the Nightwing thread.

I’d also like to thank the member Saitsu. He set a template for all thread’s to follow and hopefully I can mimic his as best I can. Read the Nightwing guide and you’ll see what I’m talking about. I didn’t really know how to start off a thread as a new user and he, like a shepherd, has shown me and I’m sure other users the way! Thanks Saitsu!!! Overview:
This game showed the real Flash’s strength in a cool way. With no projectile in a game with Deadpool, The Joker, and the Green Arrow you’d think he’d be done. Not so, with a projectile dodging move and mobility to fit his name The Flash is a fast, combo heavy fighter that finds way to mix up attacks from all angles. With a character power that slows the opponent to simulate Flash’s speed in a fair way for his user it allows him to be able to punish anyone who get’s caught unguarded, and easily allows for Flash to pull off some of the most unique and cool combos in the Injustice world. It’s also worth mentioning The Flash’s super is the most damaging in the game doing a whopping 39% damage just for landing it.

Regular… You start the game with it silly!

Regime: Unlock in the archives under Costumes. (The one I use at the moment because I like it’s in fight look.) 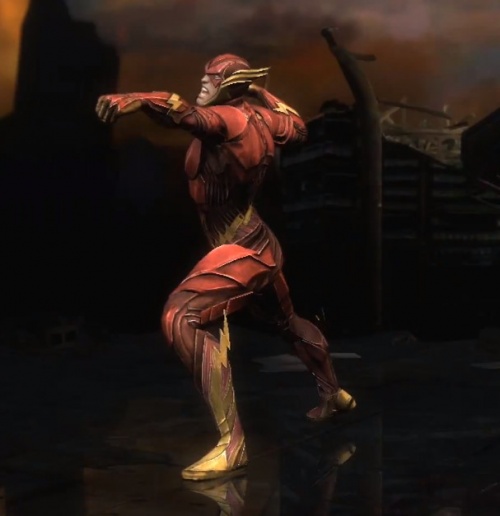 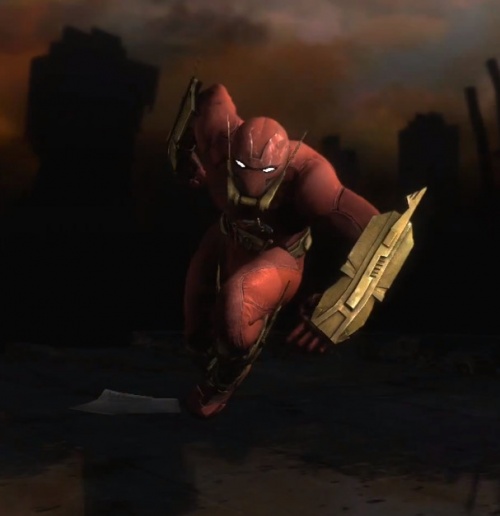 Enjoy, and pray the fighting gods give you strength on your quest towards becoming Elseworld’s Finest!

Hope you dont mind me link these but i found a pretty intresting restand combo with flash, also a lil reset that pretty ambiguist. looking for feedback, have looked about and have not seen anything like this atm.
https://www.youtube.com/watch?v=BoPQlKD4Eno

No prob making a more indepth video, was ment to upload it 2 day but props with the rending software -_-. should be up soon. got some cool combo’s in there. one of them is
like 38% no trait, no meter, no intractable, just need the corner.