If you don’t know who I am, that’s fine. I’m a very active member on the SNES Discord that has devoted a few hundred hours labbing for the sake of knowledge and science. I’ve documented several nuances within the game and managed to answer most of the questions the community had during the re-boom of the competitive community. I am certainly not among the best, though I do think I am one of the most knowledgeable.

Now I won’t go over too much in terms of characters here, but I do want to point out mechanics that are worth tweaking. While not everything present is found by me, my suggestions are my opinion and do not reflect anybody else’s.

Two ideas presented for balance were “Throw Armor” and “Dizzy Armor”. A lot of this was due to how redizzies and throwing people out of stun seem common. After enough testing, I feel that most issues surrounding this can be fixed through balance changes instead of adding mechanics.
The first hit when dizzied doesn’t add to stun, which works well enough for this game given how most dizzy combos start with a jump-in. It’s not perfect, but it’s enough to stop redizzies outside of Ultimate Attacks. Playing on higher speeds increases the potential of any TOD as dizzy recovers 1 point per frame on all speeds. There are more consistent aspects between speeds, but I won’t go over them here.
Redizzies from Chrome Dome and Michelangelo are situational. Chrome Dome’s is the result of a bug that needs to be fixed on his opponents’ end. Mikey’s redizzy only works on half the roster, and I know how to nerf it while keeping most of its power when it’s fixed to work on everybody.
I also tested the window for throws during blockstun, and it happens to be only possible while the opponent is shaking (11 frames on light, so 2~4-frame window from aerials). While not everybody benefits equally, taking this out would hurt Chrome Dome’s offense more than necessary.

Extended blockstun is quite counterintuitive to me. Half the point of blocking is to find openings and counterattack. The are three extra frames of blockstun on HS1. It proves deadly for characters like Armaggon and Raph. We can make it match hitstun, or pne frame less. My goal here isn’t to reward every block with a punish, but defense should be rewarded.
There’s also a hitstun issue. On normal speed and HS3, P1 hitting P2 grants one more frame of hitstun than the other way around. It’s side-dependent. HS1 and HS2 fixed this, but used the shorter hitstun. It can be extended one frame to match the longer hitstun and open the game up a bit. Anything with a startup of 6 frames or less becomes chainable from lights. Thanks to my frame data, we’ll already know which buttons will combo from this and balance the game from there.

The War Zone is a term I made to describe the expanded area for close normals to have them work on War. This causes them to whiff in certain spots if not fighting War, and makes using far lights harder than usual. The turtles are the only fighters unchanged, making their close lights not work when fighting him. The problem seems to be that distance checked is based on a character’s center and not how far out they are. His expanded area also makes less combos work on him. Enigami’s idea is to create a variable to change the proximity required depending on who you’re fighting. The range difference is 3~5 pixels give or take.

Negative edge is rather pointless in this game. Having only four buttons it doesn’t have as many uses as it did in SF2. Here, it gets in the way of combos with special moves that overlap. A typical player using Shredder could charge back, press kick, and then try to press forward and punch, but instead of Aura Crusher, Knee Crush comes out. My ideal solution would be to disable release check during hitpause, but I’d have no objections to removing it altogether. The only problem is that a bug in the DP motion that actually helps shoto-styled characters out. Holding any button disables DP motions because its release check wasn’t properly programmed.

Fixing lag won’t be easy. Perhaps decompressing color-change code may help, but the real problem comes from specials themselves: they randomly generate lag; most certainly the first time it’s loaded. Color-changing doesn’t directly lag, but busy stages will lag worse WHEN lag happens. Larger stages (including Noh Stage) also cause lag. I’ve not been able to exactly figure out how or why, but it always happens when the camera scrolls. My main theory is object loading, though jumping through the stage generates less lag on average. If there’s a way to remove lag from special moves, then we likely don’t need to worry about color-changing lag.
If you want a consistent example on how to lag the game, play with Leo on Thunder Dome, throw the opponent backwards, and do Endless Screw. How long it takes before he says “Endless Screw” is how long the game lags.

The last tweak is on the P1/P2 camera differences. P2 is at a disadvantage as they can’t walk back as far before the camera stops scrolling. It is player-dependent: player 2, regardless of what side they are on, will always have this issue. It causes a jumpy camera when two players close in compared to other fighters.

Impressive research and suggestions there.

What about unblockable normals?

EDIT: Also what could be done on the turtles backflip lenience input? Specially Raph, in wich I sometimes go from downback to bqck to start a fireball and get an accidental backflip?

As someone that believes in consistency, I feel it needs to be fixed. It’s a bug that only happens to three characters, for one frame, in a very specific state (crouch block). They are an avenue not yet fully explored in the meta (to my knowledge at least), but with everybody’s ability to reverse out of this I don’t really see this being a viable weakness. Aska doesn’t deserve it at all, though she has the easiest reversal. It, however, brings in new possibilities against Shredder and Armaggon The latter is the only character that has 30 frames of charge, and thus the fastest charger. If you don’t open him up by the second or third hit you’re going to eat a knockdown. Shredder doesn’t need to crouch to charge, so he can reverse faster. Armaggon is bound to get nerfed if the rebalancing does happen, so imho I don’t see a need for this to stay.

Edit:
The input system is very different. Turtles have a weird diagonal leniency because their QC motions don’t need one. I feel your pain as a Leo main as I try practicing walking back then do Endless Screw. The first input can always be held as long as possible. To do backflips, it’s release back, then press back again within 2-12 frames. I definitely want backflips to work as proper double taps, but something about storing special moves really adds to the feel of the game. Give DPs the proper motion instead of FDF and I think that we’d be set.

Wow, sorry I totally missed this…went to Japan a few days after that tourney & was there for a few months.

While I’m still running the Crabattle tournament (every 2nd Saturday!), there hasn’t been a lot of interest in TMNT:TF, so I only bring my SNES mini & host casuals for it (& other SNES fighters) now.

Instead, I rotate the 4th game based on what people tell me they want to see. Personally, I’d love to have TF there as a mainstay in the future, but simply can’t run another game without any others to help out at the moment.

Feel free to come out though, & help me build hype for TF! Let’s get Turtle Combat back in Crabattle!

#NorCalCrabattle is a monthly in the San Francisco Bay Area that focuses on retro fighting games. Come join us to play some of the classics—our mainstays are ST, CvS2 & VSAV! We also try to mix it up & have tournaments for other games as well, alongside hosting tournaments for other underrepresented/poverty games run by the community.

Attention all Turtle Combatants! Registration for the @Anime_EVO TMNT:TF tournament 🄴🄽🄳🅂 🄾🄽 🄵🅁🄸🄳🄰🅈 There is NO on-site reg, so get in now! We’ve got some of the best from the East & West Coast, as well as some international killers! https://t.co/WFxqqk5CyX

(Please RT to spread the word!)

I’m bringing a set up for casual play at The Fall Classic!

Wassup yall. Just dropping another link for my monthly in NorCal, the next one being this Saturday: While I will not be running TF this time around, I always bring my SNES mini with me & am always down to play! In 2019, I should have my SD2SNES, so we’ll be able to play on actual hardware!

Hope to cya’ll sometime, drop me a line on twitter if you’re gonna make it out! 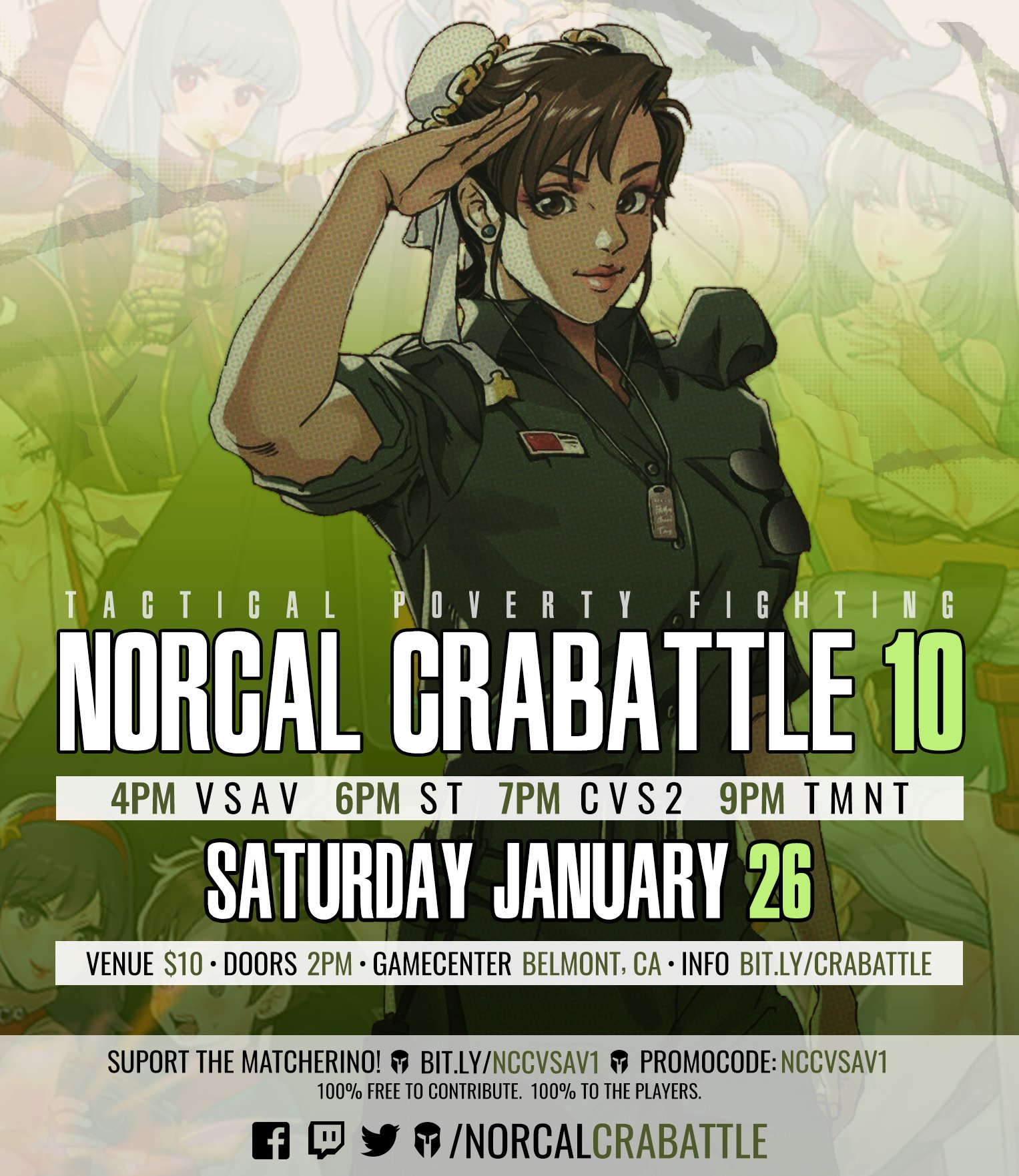 #NorCalCrabattle is a monthly in the San Francisco Bay Area that focuses on retro fighting games. Come join us to play some of the classics—our mainstays are ST, CvS2 & VSAV! We also try to mix it up & have tournaments for other games as well, alongside hosting tournaments for other underrepresented/poverty games run by the community.

TMNT:TF starts at 9pm, but we’ll have a SNES setup all day!

Lineup for This Month

Please read this link if it’s your first time!

If you are unfamiliar with Game Center, it is a very special place that is not like your typical business-oriented arcade—it is run by us, for us—so please read the document linked above carefully for the rules & address. Also, remember there is no smoking in, or around the venue. Please take it to the nearby street.

The venue fee of $10 helps keep GC open. While small, GC not only has cabs for NCC tournament games, but boasts many monitors & PS4s to be used to play other games. Most of them have the latest versions of all the AirDasher games, but don’t be afraid to BYOC! Contribute to the Pot!

Thanks to Matcherino & our sponsors for giving us a free way to contribute to our prize pots!

You can further support by clicking on the sponsor links along the right side as well!

See you there on Saturday!