I recently managed to get my hands on the 14 issues of the 80s Xenozoic Tales series, and will try to start reading them today along with Elephantmen.
I’d like to know what are some other UG Comic series that are also worth getting as well.

Underground stuff is usually subversive in some way. ie sex drugs or violence.

As far as series to recommend it all depends on what you are drawn too.

The only other one I frequent is Crumb but have pretty much checked out all of the mainstream underground stuff.

But yeah sometimes I forget who is an isn’t underground.

Yeah… Reason I asked is 'cause Akky Gammy mentioned Elephantmen, which isn’t really what I think of when I hear “underground comics.” I want to make sure I pimp the right topic.

^Oh sorry, it’s just that I tend to read 2 series of comics together, my sentence was just to state that’d I’d read along with another comic, sorry if it meant that the other series was ‘Undergound’ ^_^;;;

Whoops, almost forgot about this thread…

I don’t know if I read much underground stuff, but I read a healthy amount of indie/alternative press books. Does American Splendor still count as underground? (They made a movie of it…) Anyway, that’s one of my all-time faves. I try to get everything Harvey Pekar writes.

I also dig Peter Bagge’s Hate (the Buddy Bradley stuff) series. I have all the Buddy Bradley books, but haven’t actually read through every single one yet. I should get on that because the ones I read were so good.

But I don’t know what else. I think it’s just that when I think of “underground” I just picture an insanely high Robert Crumb sitting in a basement drawing chicks with giant asses and big tits. Other than that, I generally enjoy stuff from alternative publishers like Top Shelf, AiT/PlanetLar, Oni, Drawn & Quarterly, and Pantheon. I like Fantagraphics but those guys can be pretentious dicks sometimes. And nobody really needs those people who haggle over semantics, like whether “underground” is different from “indie.”

I finished Xenozoic Tales a while ago and the comic’s last issue really mad me sad, why’d he end the comic there, did he run out of ideas or something?

I have no idea. Never read it. Maybe he made enough money off Cadillacs and Dinosaurs?

But that doesn’t explain why he’d bother with that Superman & Batman vs. Aliens vs. Predator crapfest.

So yeah. I have no idea. Maybe he’s playing World of Warcraft.

But that doesn’t explain why he’d bother with that Superman & Batman vs. Aliens vs. Predator crapfest…

I think so… Wasn’t there one like this except take out superman insert judge dredd???

Yeah, it came out just a couple years ago. I think the TRADE, BABY came out last year. It has art by Ariel Olivetti. So it looks cool, but the story is just lousy. I remember reading it (at Borders, of course) and just being in awe at how many times Superman could say, “Great Rao!” while discovering corpses. 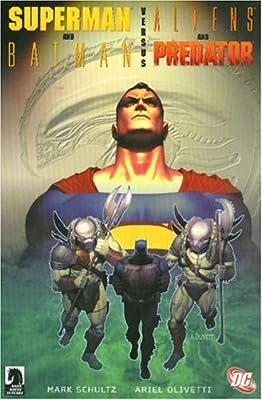 Superman and Batman team up to face two different races of aliens that have invaded Earth.