So I didn’t get to see the stream, but I read in a Liveblog that a new Mad Catz TE 2 Fightstick was used to demonstrate the new Killer Instinct for XBox One! Anyone seen any additional details about that new stick? I suppose that the MadCatz.tv site is mum until tomorrow.

UPDATE 2: Renamed thread again… XBox ONE has dropped! People should be getting their TE2’s any day now, so show 'em if you’ve got 'em!!!

Info Thread: Rules, FAQs and Tutorials Inside. (READ THIS BEFORE HITTING THAT NEW THREAD BUTTON!)
What Stick/Controller Should I Buy? Read the Guide on Pg 1 Before Posting
Sticks and next-gen consoles
Absolute Question and Answer Thread v.3 (ASK YOUR QUESTIONS HERE!)
ChaoticMonk June 11, 2013, 2:23am #2

you could only see the back profile due to the angle. Couldn’t see anything else really

looked about the same size and form though

I saw some pics in a link tweeted by MCZ’s Twitter feed. They were TE bodies with Red S side panels, apparently will go by the name TE 2, and obviously has an XBox One compatible PCB in it… The ones shown off in the custom KI Kraylix cab even had KI artwork, but the article stated that MCZ customized them for the reveal. The sides might just have been Red to match the cab.

Even though KI is coming and has raised alot of eye brows in the FGC (I called KI as one of the exclusives and was hoping for it), our dreams are still stomped to pieces by the boot of microsoft and their strict “Always online” policy. But I’m excited to see the TE 2’s release and hope MCZ has made improvements on its design and modding possibilities (hope they took a lil note from Razer) and let em hold their spot as one of or THE best arcade stick development companies today.

Site has all the screenshots released thus far. Looks like still a prototype as far as the art goes. 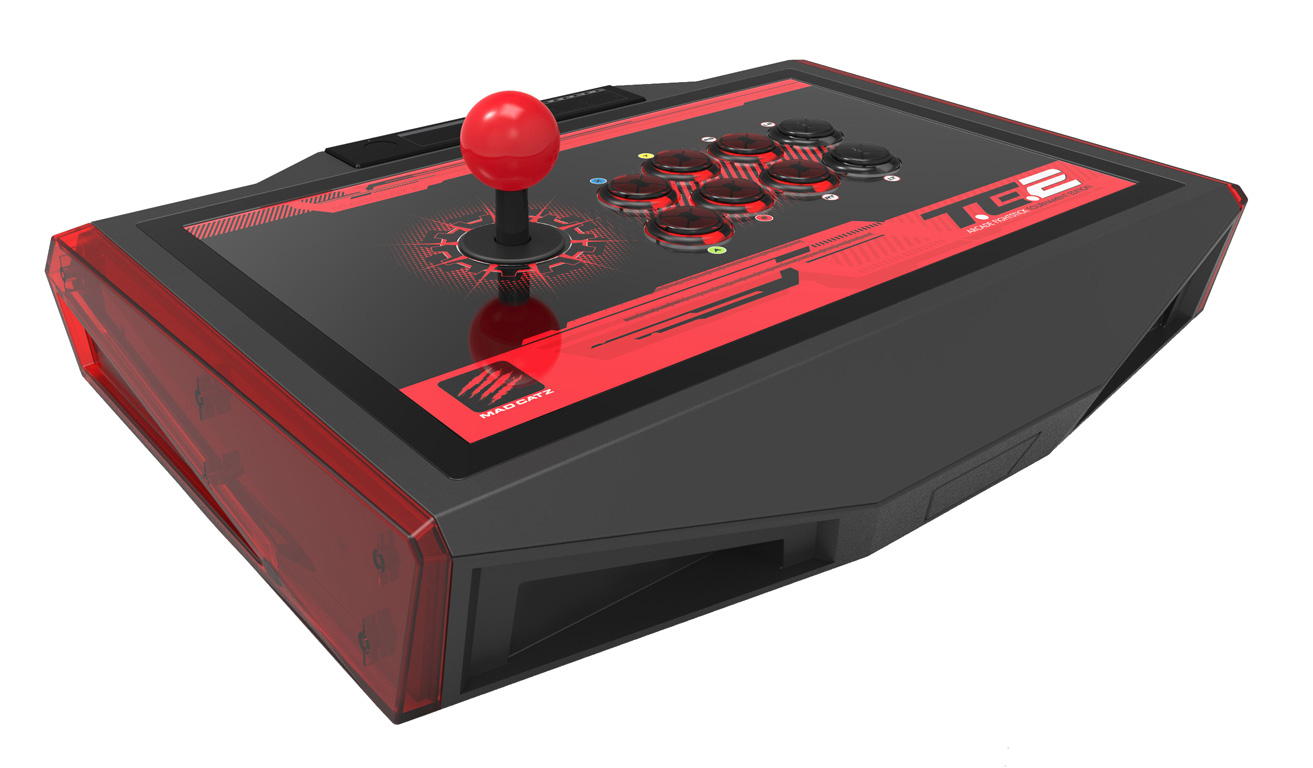 I do not know how I feel about this, I am excited about new possibilities from Mad Catz, but I so hate the Xbone, the direction M$ is going with the Xbone ect…

I hope for everyone elses sakes this stick is common ground, I no plans on ever getting this as I am going to avoid the new Xbox more than than I avoid EA titles.

Yeah, the news for the XBox One is either bad – pay to play used, the DRM, the 24-hour on business, etc. – or underwhelming as far as exclusives are concerned. Gee, another Killer Instinct??? Like the original game and N64 versions were that special?

Almost by default, the PS4 is smelling a thousand times better! (I’ll still wait until next year to buy one. Let them sort the first-gen manufacturing bugs out first!)

This is all Sony’s to lose, folks.
Nintendo seems almost out of it and MS has messed up its PR from day one.
Yeah, Sony has financial issues and the PSVita isn’t doing well but they might be in the best position possible since 2001.

I would never have expected all its main rivals to punt so badly at the 1-yard line.

So why do I feel like we might go through another console generation that may not be so special??? On balance, was this past generation really that good?

I totally agree and do not want an Xbone at all, but Killer Instinct!

For fighting games I think Sony is gonna come out on top in the long run but idk about every other genre, they just showed a new final fantasy and kingdom hearts on ps4 so get hype for that. the tournament scene is 0 population for the XboxOne looks like.

Nice detective work @butteroj - I just hope there’s a PS4 version in the works! All things considered, I’m not in a rush to get a next gen stick, hehe…

Of course there’s going to be a PS4 version!

Do you honestly think Mad Catz wants to lose out on making money off of what’s likely going to be the leading next-gen system after this next Christmas holiday season?

I kind of hope they both have the same button color scheme like the prototype shown…
(Hopefully with Sony not enforcing the same dumb $h!t MS is already doing now what with the button colors, the security chip, etc. Majorly annoying their fans… and I still don’t get that XBoy fanboyism. Of the three companies, I trust MS least by far…)

I totally agree and do not want an Xbone at all, but Killer Instinct!

But I never really liked Killer Instinct on the SNES or N64. I know that Killer Instinct was made by Rare, but I though that title had “PROPERTY OF NINTENDO” written all over it.

I agree with your opinion, just not in the way you decide to express it.

That being said, the shape of the new stick is cool, although i think they could’ve done it in a way to make the existing TE mod parts compatible… Not hatin’, just sayin’.

That new TE is gross. And the new KI has me super excited but I really didn’t like what I saw.

Is Madcatz making sticks for the Sega Saturn too?

Can’t wait to see the ps4 version of the te2.