Hey guys, voting 2 has started today. It’s shorter and with a new voting system. You have only 3 DAYS to vote and you’ll rank the characters you like. After the initial 30 characters (no Juju due to the legal complications), the next round will be the Top-20 and then the Top-10.

I would like also to voice my support as a competitive player to D.Violet, cuz she has many awesome ideas and inspirations, and I looooove her Force Crouch mechanic. That thing would be specially awesome to see in action and to allow lots of crazy setups and mixup possibilities.

You can vote for everyone you like, but since it’s a ranking system, consider keeping D.Violet as high as possible on your list if you want to show some support to this mechanic. If the dominatrix/sensual themes are too much for you and you don’t feel ready for it, that’s okay, it’s your issues, but remember that the FGC has many icons that follows the same suit (Mai, Morrigan, Cammy, Juri, Poison, etc.). Mike was also wanting to make a gameplay prototype for Violet, but unfortunately I don’t think he’ll have enough time to do it (Thanks MS).

ABOUT DEEP VIOLET and MRS VICTORIA:

As most of you may already know, Mrs. Victoria, the teacher at Filia’s school and our great master in the Tutorial modes, and the horned devil lady known as D.Violet are actually different sides of a same coin. Yup, they’re essentially the same person.

D.Violet is a super heroine-esque / vigilante persona of Mrs. Victoria. While by day she teaches the children and wanna be fighting gamers to become the greatest they can be, by night she hunts criminals, mob members and Skullgirl’s minions with her deadly living weapon the Pazuzu Whip.

There are still lots of mystery surrounding D.Violet and Mrs. Victoria and it sure would be great to see them revealed and fleshed out. 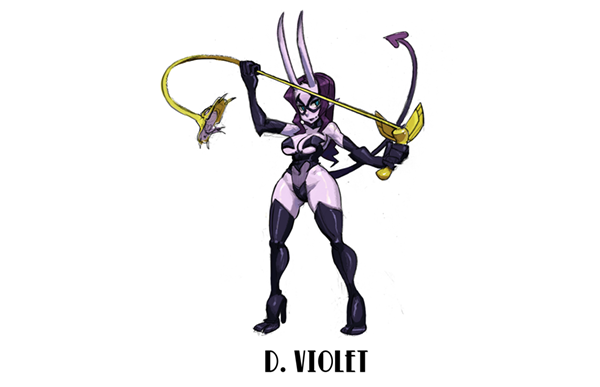 A former crime fighter pulled into the web of intrigue woven around the latest Skullgirl. Deciding it was too much for her stuffy civilian identity, she takes up her Living Weapon, the Pazuzu Whip, to don her alter ego once more.

*She may be less inhibited, but she still enjoys having control. Lick those boots!

Despite being a heroic character, her general attack style would have a pagan and demonic motif to it as well as a dominating aspect. Of course, she’d also be able to do some long distance attacks with her versatile snake whip. The weapon can grow multiple snake heads and change in rigidity as needed.

D. Violet may do special animations on herself in order to power up. If she reaches an intense enough level, she gains the ability to unleash wilder attacks. Similarly, she can curse the enemy with special attacks, putting them in a humiliation state and making them vulnerable to devastating special attacks. If the balance of power swings entirely in Violet’s direction, everything from their posture on up is in her complete control!*

== All character playstyle speculation and gameplay inspirations are subject to change,

and may be different in the final version ==*

My avatar should be a dead give away.

The idea of actually using my dead teammates to hit people with sounds too entertaining to pass up. That and I enjoy prisoner type characters and a bonus for me is that I prefer playing massive characters in games.

Course how could I not vote for Stanley and Beowulf?

But really anything is better than the last votes we had in the finals.

Anyone confused about how to vote, fear not; here is the CORRECT order:

Anyone confused about how to vote, fear not; here is the CORRECT order:

Fixed indeed, but come now; do you really think this thread is going to be anything but? 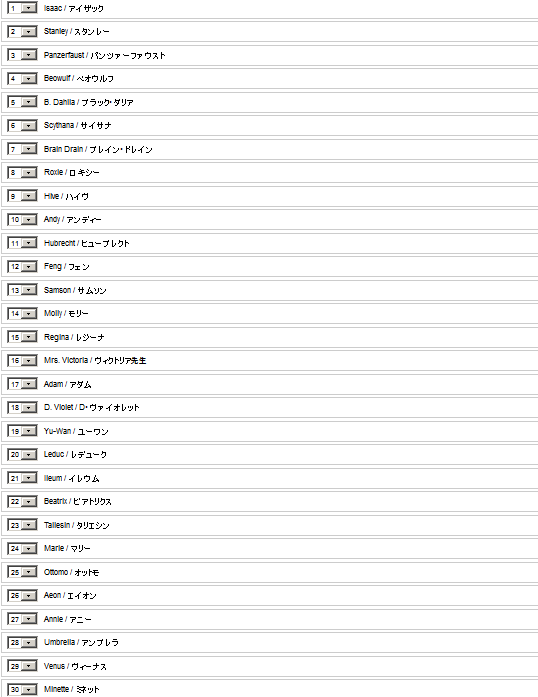 actually that is the correct order

Awesome! Round 2 of voting has started!

Time to continue to show that support! And if any of your favorites didn’t make it consider support Violet for that force crouching dirty mixups! IMAGINE THAT AS AN ASSIST CALL!! Keep D.Violet on your Top-8 characters!

I just wanna say you Leduc and Hive haters can kiss the fattest part of my ass.

I would like it if as many people as possible write in:

Another game genre for skullgirls merchandise.

I would love to see SG universe expanded into either an open world action/adventure game, or a platforming beat em up with the ability to move in the back ground and foreground as well as hop up or down into other platforms.

Heck even a party rhythm game with more laid back jazz, down tempo, grunge and similar music would be awesome.

You lies. Do not lies.

*This game needs more zoners and a mid range dominators. Give Talisen, Dhalia and Violet high spots on your list after your favorite 2 or 3 characters. *

I hope D. Violet takes this.

Thank god Dhalia made it to the top 10. I would love a character that can zone but has a better up close game than peacock has.

I’m that guy upping venus/aeon because they would be crazy jank zoners an I love creative chartcer options.