Hey I’m bored at work and was just wondering what everyone’s most prized book that they own is. Can be anything really, floppy, TPB, HC, hell even something that came with a toy!

Mine’s Iron Man #55, sup Thanos :woot:. Thing is is that it’s in awful condition, no rips but the papers yellow with a wet mark distorting the first page, but I’m still glad that I own it

Xforce #1. My love for this comic is completely out of proportion.

I also really like my TMNT: City at War issues, but I’m missing a lot of comics.

I’ve sadly sold off about 99% of my comics, but there’s one I’ve kept and I don’t think I’ll ever sell it. Well, maybe not never… anyways, I have an original 1963 X-Men #9, first fight between the X-Men and Avengers. It’s in okay shape, could be better but what’s so great about it is that I got it autographed by Stan Lee a long time ago at one of my first SDCC’s.

Xforce #1. My love for this comic is completely out of proportion.

Yeah, that’s pretty bizarre. Just like your avatar. What the hell is that?

If I had to only pick one, it would be Amazing Spider-Man #300 because it had Venom’s origin and that’s also when McFarlane busted out his crazy style that he didn’t really use in 298 and 299. I’m not as big a fan of McFarlane as I was back then after I started learning more about anatomy, but the big eyes, the crazy webs, Mary Jane stripping for Peter Parker, well it really blew my young mind away. I’ve read the issue so many times and I didn’t really take good care of comics back then so it’s in pretty crappy condition, but it brings back a lot of memories.

Amazing Spider-Man 269 if I could pick more than one or so since it’s the first comic I ever paid money for. Written by Peter David, who would in turn become my favorite comic book writer. A fact I didn’t learn until years later after he was my favorite writer, hey when you’re a kid you just don’t remember writer’s name much. Oh, it’s also in pretty crappy condition.

Other than that I have X-Men 1, 2 and 3 signed by both Jim Lee and Chris Claremont a piece. Those I have in really good condition.

I also have all of Shuma-Gorath’s physical appearances in Marvel comics. It took quite some time looking for some of the Marvel Premier comics and Conan ones, so I’m quite proud of that. :lovin:

I’m quite fond of JMS’ Amazing Spider-Man 9/11 issue. A big reason is because I work 10 minutes away from the World Trade Center and was at work the day the towers fell. So it was special seeing my good old Marvel friends react to a situation that affected myself and lots of people that I knew at work that had family working at the towers.

I can probably come up with more stuff but I literally have 1,000s of comics, it’s hard enough to narrow things down oooh…

My brother has the original Dark Knight Returns books and the Batman Year One comics, along with the 80s Marvel Universe comics. He has a lot of the X-Men Claremont books, like from Dark Phoenix all the way to Inferno which I would read all of the time when he wasn’t around. Also Secret Wars I, and the not so good Secret Wars II lol! I hold all of his comics for him so I guess they are not my trophy comics but pretty special to me, and I’m just not going to let him sell them to anyone else but me anyway.

Some of the above I have in trades so I don’t go and reread his comics all of the time.

'm not as big a fan of McFarlane as I was back then after I started learning more about anatomy, but the big eyes, the crazy webs, Mary Jane stripping for Peter Parker, well it really blew my young mind away. I’ve read the issue so many times and I didn’t really take good care of comics back then so it’s in pretty crappy condition, but it brings back a lot of memories.

Hurm. Sounds like you really wore it out. Tell me, is this trophy comic sticky with years of your dried web fluid?

I don’t know if I can pick a single trophy comic.

I would probably have to go with my Absolute Watchmen. Not that it’s rare or hard to obtain or anything. I just really like it. A lot.

As far as single issues, I think I would either go with my copy of Scene of the Crime #1 which Brubaker signed for me after we played air hockey at the old Isotope this one time. Either that, or my Ex MAAAAAAAAACHINA!!!1 #1 that BKV signed out to me. (He wrote, “‘Machina’ pronounced with a K, bitch! Thank you for knowing the score!” The story behind that is my buddy and I walked into the store and he told the Comic Pimp he wanted to check out the new “Ex Ma-sheena.” I then said, “Dude, it’s Ma-KINNA!” And then the Comic Pimp, who was probably a little tipsy by then, yelled, “Oh!! Ma-KINNA, bitch! He told you, bitch!” And that’s how I met Brian K. Vaughan for the first time.)

comic-wise it would be comico primer #2 (first app of grendel) and my pre-unity valiants, especially magnus robot fighter 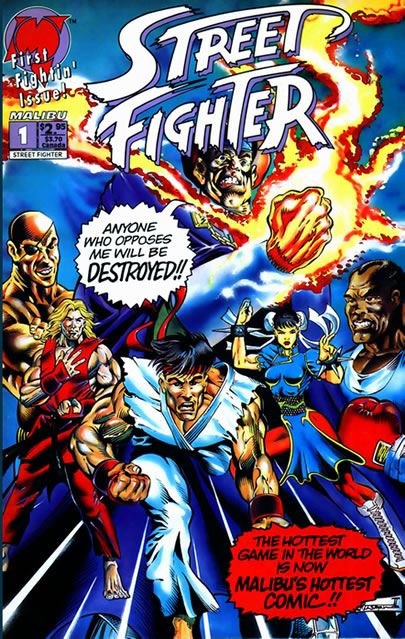 No really, it’s one of them. That shit is everything the american movie wanted to be.

comic-wise it would be comico primer #2 (first app of grendel) and my pre-unity valiants, especially magnus robot fighter

So basically, your entire collection is your trophy. I can dig that.

No really, it’s one of them. That shit is everything the american movie wanted to be.

LOL, that’s awesome. I still have the second issue of that Malibu series. I found when I was walking around my neighborhood with a buddy way back when we were in high school. There was a local comic book shop that we walked past, and they had a box labeled “Free Comics, Help Yourself” right outside their door. My friend and I browsed through it and came away with this treasure, a near mint issue 2.

That comic is one of the greatest things I have ever owned. It’s got everything a good Street Fighter story needs, except for the likenesses of Raul Julia, Ming Na, and Jean Claude. (Probably the main reason why it doesn’t rank in my top trophy comics list.) But it does have Ryu talking to AND fighting a car! And Ken gets murdered AND scalped by Sagat. I wish I had a scanner because this is worth reading. UDON should look into getting the rights to reprint this thing because it is a true watermark in the Street Fighter canon and belongs in any serious fan’s collection.

It’s well worn and beaten up all to hell from all the times my friend and I read it, but at least it doesn’t have any web fluid stains.

I wish I had a scanner because this is worth reading.

That’s a pretty good summary, but if you ever want more frames let me know. I’ve got the first 2.

all my Archie TMNT comics.

I loved the Mighty Mutanimals mini-arc.

It was really dark and violent like the og Mirage stuff.

Saw it at a comic shop and had to get it…I know, not much of a “trophy” but its close enough for me since I quit collecting years ago.

My WWF BattleMania with Ultimate Warrior and Undertaker on the cover. I’ve had it ever since I was like 2.

Damn all of these signed books, impressive :wgrin:

Sano - That’s a good one to have, every time I’m at my shop I eyeball it with temptation… but the sticker on it’s a tad too high.

The Thing issue #5 and I can’t remember the issue number, but it’s the first part of Spidey Vs Juggernaut. The one he is trying to protect Madame Web.

all my Archie TMNT comics.

Can we pick more than one? My number one prized comic would be Spider-Man Mythos. Basically it’s a retelling of Amazing Fantasy #15 by Paul Jenkins and Paolo Rivera. This updates the tale without screwing up anything. IMO this is one of the best Spidey books bar none.

Hurm. Sounds like you really wore it out. Tell me, is this trophy comic sticky with years of your dried web fluid?

Man when I was a kid my system for keeping comics in good shape was stacking them up nicely on a shelf with no plastics, I don’t think people even used backboards in the early 80s… least not in Brooklyn… We had plastics but our local comic shop was in Queens, kind of far and train stations and cigar shops where we would get most of our comics didn’t sell plastics. Ah well, I can kind of laugh about it now since old comics really aren’t worth much nowadays.