Wife Cuts Off Husband's Penis And Throws It Into Garbage Disposal 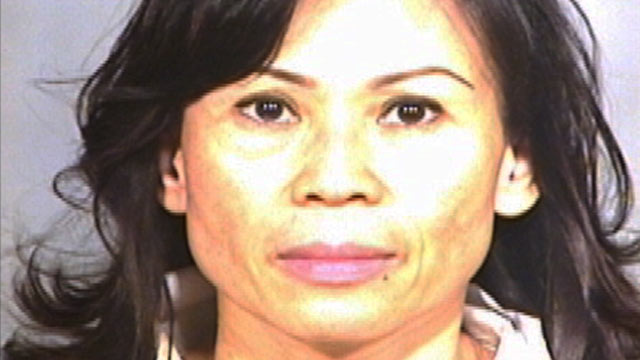 Catherine Kieu Becker, 48, is under arrest for cutting off her husband's penis and throwing it in the garbage disposal. He was rushed to University of California at Irvine Medical Center, where he is in serious, but stable, condition. Becker was...

Catherine Kieu Becker, 48, is under arrest for chopping off her husband’s penis and tossing it in the garbage disposal.
After she laced her husband’s food with an unknown drug or poison, he lay down, believing something was wrong with the food, according to police reports. Her husband then woke up tied to the bed as Becker cut off his penis with a knife. She then threw the genitalia in the garbage disposal and turned the disposal on, Lt. Jeff Nightengale of Garden Grove, Calif. police, said.
Nightengale said the couple is going through a divorce, but could not confirm why Becker wanted to cut off her husband’s manhood.
Becker eventually called 911, asking for medical assistance. When firefighters and police arrived on scene, Becker told officials that her husband “deserved it,” said Nightengale. Police found the man, who remains unidentified, tied to the bed and “bleeding profusely.” Becker was arrested on several charges, including aggravated mayhem, false imprisonment and assault with a deadly weapon.

Her husband was rushed to University of California at Irvine Medical Center for treatment.
“He is in stable condition, but we have no details about the surgery,” said Nightengale.

“Police were able to recover portions of the penis from the garbage disposal,” Nightengale noted, but it is unclear how much or whether doctors will be able to reattach them.
“The immediate issue here is to control the bleeding,” said Dr. Alasdair Conn, chief of emergency services at Massachusetts General Hospital, who said that the injury is quite unusual, even in the emergency room.
Upon his arrival, doctors need to tie off arteries and veins to stop the bleeding. Surgeons will attempt to maintain the remaining tissue and cover the wound so it does not get infected, Conn said.
If the penis is available to reattach, Dr. Ryan Terlecki, assistant professor surgical sciences-urology at Wake Forest University, said it should be wrapped in saline-soaked gauze, placed in a plastic bag, and the bag then should be placed in an ice bath to keep cold.
“Time is of the essence for a re-implant,” said Terlecki, who has performed a handful of such procedures. "It’s best to reattach it within 24 hours, preferably less than eight hours."
Doctors then reconstruct the nerve arteries and veins, while also putting the erectile tissue back together.
Urine control will not likely be affected because the muscle that causes the sensation to go to the bathroom is outside of the bladder. That muscle probably went untouched during the assault, Conn said, but a Foley catheter will likely be inserted into the bladder to drain urine, which is also "a relatively straightforward procedure."
If doctors cannot reattach the original penis, Conn said, "over the next few days, surgeons have to decide what to do to reconstruct the penis. Plastic surgeons who specialize in transgender operations may be able to construct a new penis."
Terlecki said that the penis is recreated by grafting tissue from another part of the body and then augmented with a penile prosthetic.
With the prosthetic, a man can still “urinate and have sexual relations and ejaculate.There’s usually not the same force of ejaculation, but plumbing for that purpose is still intact.”

So much for the subservient Asian housewife stereotype. This was pure calculated murder of the 3rd degree.

The sad part is, if he had escaped from his ropes and assaulted her in a blind rage the legal repercussions would be lengthy. In my opinion, if a woman is prepared to sever a man’s penis and emulsify it, she should also be prepared to like, not exist in this world, anymore.

Ouch. I wonder what he did to “deserve it”

It’s almost hilarious how people will explain away any crime a female commits. The comments are horrendous. They’re bad on every site this story has been published on.

geez. see that face? not like she was gettin that dick anymore, jesus christ

by the way, joke’s on her. as long as you have access to a human finger, you can have another penis. so basically, all she did was cause him some emotional harm and get herself jailed. he’s definitely gonna get another dick

Really? Like is it a real penis, or just a finger where a penis used to be?

Soon as I read “Catherine” I almost screamed like Vincent.

Again? This shit has got to stop. People are finna start slicing boobies in retaliation.

judging by her masculine bone structure and latent transgenderism, she was likely just jealous

One can only imagine the pain and horror…

This will be excellent for SoCals proposition to become its own state.

fuck…this really killed my mood. it’s gonna be hard to get it back up =/

I didn’t even read the thread yet. That bitch crossed the line! That is just something you do NOT do!

Really? Like is it a real penis, or just a finger where a penis used to be?

I don’t know hte process, I just know a finger could be used to work as one

The man was filing for divorce - it was his right to escape this abusive woman.But before he can escape - she commits her final act of control.Now she can try to control her prison cellmate. It’s important that this man get justice, but frankly there is another story here as well.That is the inhumane and absurd reaction of many an american - who actually approve of violence, andare so radicalized in their hate - that they no longer think of men as human beings.Human beings deserve more respect than this man was shown.This abusive woman may have thought she was justified, but she wasn’t.And if you think she’s justified - you need to check your own thinking.You just may be a violent radical as well. Then end result for you, may be prison time.I’ve made many an anti-feminist comment, but its not because I don’t believe in equality, but precisely because I do believe in equality - and they don’t.How is the right to mutilate - equality?How is making light of committing violent abusive acts towards a gender, equality?In their mind it is - because they are so radicalized. But they are just wrong - they’ve lost all sense of balance.

Maybe her husband had been plenty violent toward her and that’s why she was angry enough to commit such an act. Ever think about that one Mr. roblearns2000? Not saying it’s OK, but in the majority of cases women put up with way too much violence and abuse before they fight back. However, times are changing, thankfully, and some women are fighting back now. Have a nice day!

i’m raging the fuck out over here.

also i’m raging the fuck out over ABC titling the report “OUCH!” they for damn sure wouldn’t title it “OUCH!” if a man mutilated a woman. "OUCH!: man shoves hot poker in his wife’s vagina after she filed for divorce! LOL! OUCH!

i’m raging the fuck out over here.

also i’m raging the fuck out over ABC titling the report “OUCH!” they for damn sure wouldn’t title it “OUCH!” if a man mutilated a woman. "OUCH!: man shoves hot poker in his wife’s vagina after she filed for divorce! LOL! OUCH!

Is it wrong to say that your username and this topic are a strange coincidence? Lol