Hey SRK, first time poster, wanted input on the way I modded my Xbox 360 controller (the silver one with the pop-up cross on the D-Pad).

First let me say that I’ve always wanted a fightstick, just never had the scratch layin’ around to pick one up. Up till recently, I’ve used a standard 360 controller that I modded slightly (added a spacer between the membrane and the bottom of the D-Pad, and sanded out the well), but the left analog has developed a problem where if you even nudge it to the left, it sticks, and I was tired of having to wedge a pencil eraser in there so I wouldn’t start walking backwards in the middle of a fight.

I bought the ‘improved’ model gamepad when it came out, after reading a lot of reviews on how much better the D-Pad was, but after a month of Mortal Kombat and Guilty Gear XX #Reload (on the PC), I went to QCB and the damn cross snapped off of the D-Pad and hit me in the face. So it’s been sitting, broken, ever since (this was about a year ago). So when my go-to gamepad developed a lazy stick, I pulled this one out and pulled it apart.

Now, older-model 360 controllers had D-Pads that were built almost exactly the same as the S-Controller’s: a 2 pieces of thick plastic that both snap AND are screwed together so that it is impossible to remove the assembly without separating the two parts.

This new model D-Pad is a good bit taller, and you don’t have to take it apart to lift it out of the controller housing. Oh, and the new model has no less than 4 lightweight plastic parts, 3 nylon parts, and a spring. Most if it is the assembly for the ratcheting ‘pop-up’ D-Pad (which is impossible to take apart without having to spend five minutes on your hands and knees trying to find where the spring sprung off to), which is held together by a short screw. Then, the whole thing SNAPS onto the base plate (which is remarkably similar to its predecessor’s), and is secured by…nothing! Just the tensile strength of 1mm-thin plastic. No wonder the damn thing broke.

So I was looking at this, feeling an angry letter to Microsoft coming on, when I decided what I would do is pour out my junk drawer and fix it myself. This is what I wound up doing: 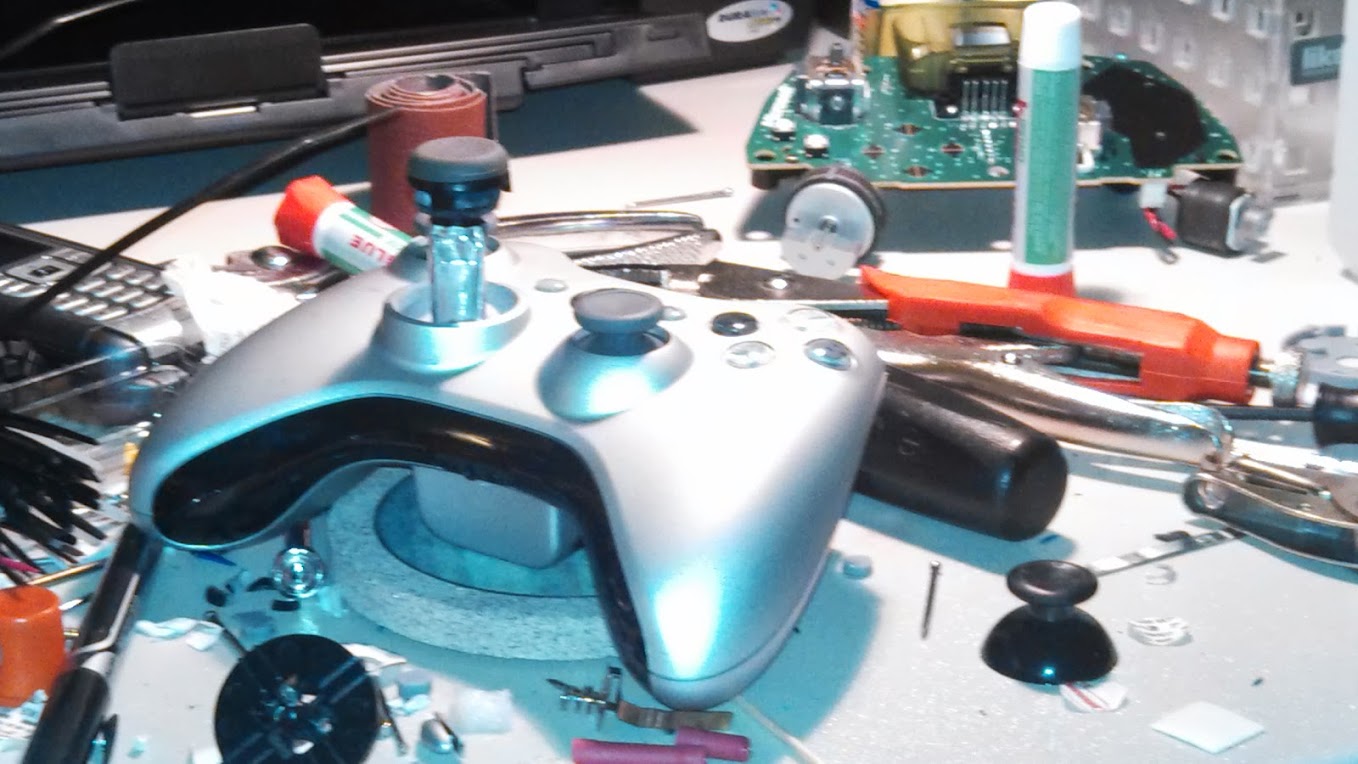 Yeah! So here’s the process, if you want to try something similar (believe it or not, this thing isn’t uncomfortable to use, and I drop combos WAY less often than with the modded D-Pad on my other controller).

I got rid of everything except the base plate and the round white nylon piece that snaps into it. I drilled the center hole a bit wider with a 3/16 bit, drizzled krazy glue on a small blue drywall anchor, and pushed it firmly into the hole until it wedged, about 2/3rds of the way in. While that was drying, I took a thumbstick from an old S-Controller (you can see the other one in the picture), and drilled a hole straight through the middle with a slightly smaller drill bit. Then I cut off most of the domed part with diagonal cutters, threaded the matching screw into the hole, and screwed into the anchor. (sorry, I don’t have a pic for this part, but you can use the power of your imagination, I hope).

Next, I took the base plate, and drilled out the center of it. I kinda wish I hadn’t, but my design evolved along the way, and it seemed like a good idea at the time. You can skip this step if you want. Then I got a box of wire brads, found a straight one, and put it in my drill ('s a good way to make a small hole in plastic). Using that I drilled four holes in the baseplate (as you’ll see in the next pic). After that was done, I snapped the nylon bit onto the baseplate, and drilled through the holes I’d already made, and secured the stick to the baseplate with 4 more brads, as shown: 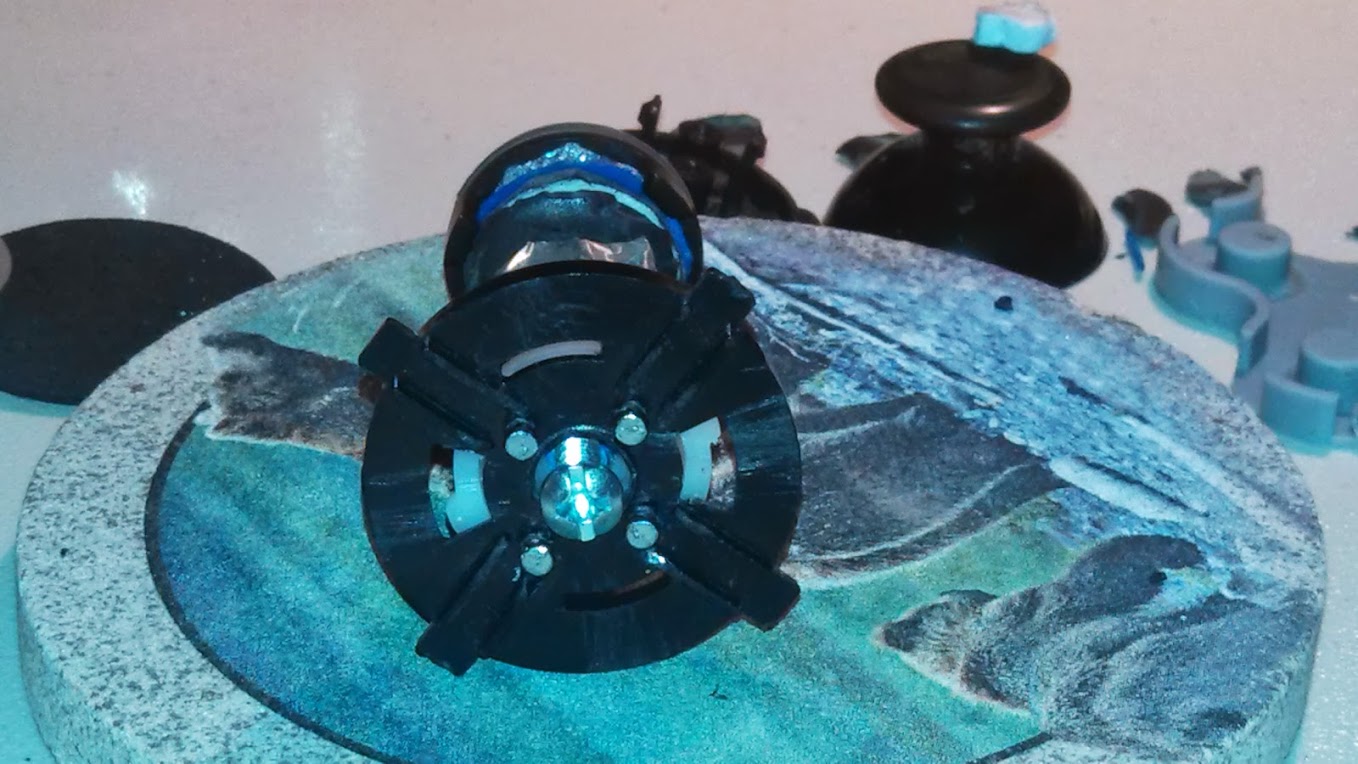 I also threaded another, much shorter screw into the bottom to act as the pivot point. 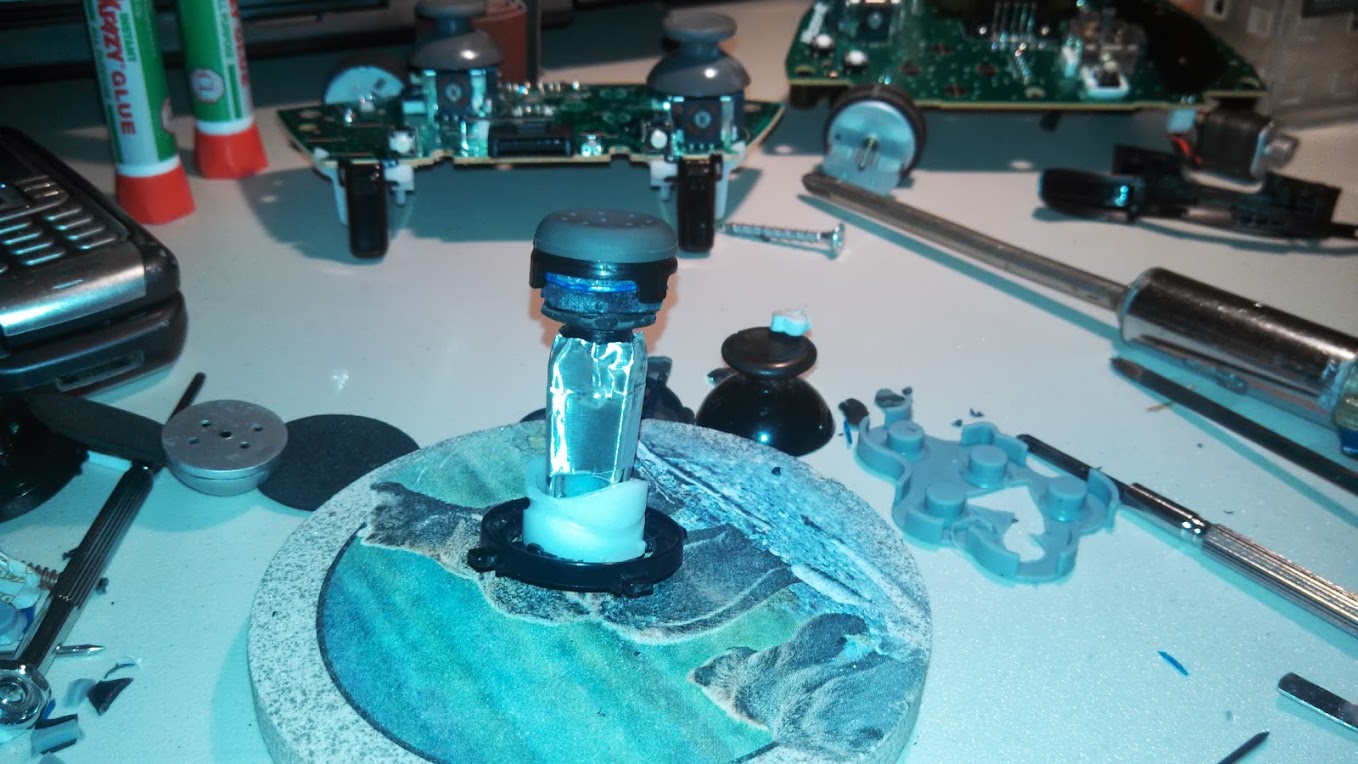 And then I looked upon what I had wrought, and saw that it was awesome.

As soon as I can get to the store and score some Pringles, I’ll make a spacer to go between the baseplate and the D-Pad, which should make everything real snappy. If I could have found my roll of electrical tape, it would probably not look so ugly. 0/ ~Fake

This is ridiculous in the best way. Good job.

This is ridiculous in the best way. Good job.

Oh, and I found my electrical tape.