What a shame that one of funniest dumb films or dumbest smart films ever had the bad luck of being released 17 days after 9/11, so although it made 60 million on a 28 million budget it still flopped. Still with a cult following after DVD release, a sequel was planned for years, but scheduling conflicts, Ben Stiller not being happy with the scripts they had, writer/director Justin Theroux’s own show The Leftovers getting picked up for a second season, the sequel’s been on the back burner, but now it’s back burning! hot on the heels of commercially successful comedy revivals like Dumb and Dumber too and Anchorman 2. Some say Stiller and Wilson are too old to play models, but only those predjudiced against the really really really ridiculously good looking would think that.

Penelope Cruz and Christine Taylor are confirmed, but it’s unknown whether Will Ferrel and Jonah Hill who were previously confirmed in an earlier draft of the script are still in, but hey I’m just so happy after so many stops and starts, it’s actually happening. One draft of the script had it starting 10 years after the first film where Hansel and Derek were irrelevant in the fashion world and trying to get their name recognized again with Jonah Hill as the main villain, but Stiller was trying to rework it into something he was happy with to do the franchise justice, and I guess now it’s taking place right where the first one ended. 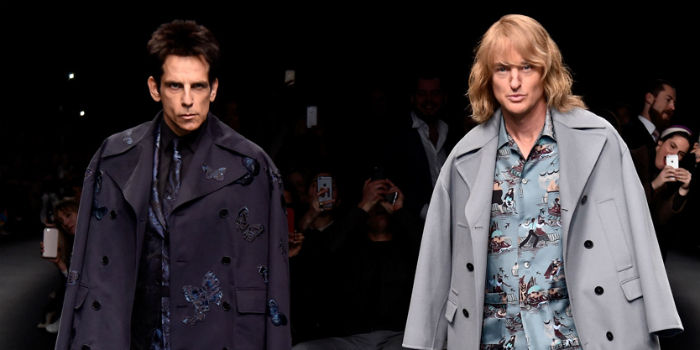 Nice. I hope it’s better than Dumb and Dumber To because I was disappointed.

one of my faves of all time, anxiously awaiting this

That Hansel’s so hot right now.

This movie was perfect

Uh Earth to SRK, I think we could come with a better thread title.

I used to watch parts of this movie about once a month with my housemates, it’s so quotable and never fails to crack me up. Looking forward to the sequel.

If I had been at that fashion show, I would have lost my shit seeing Hansel walk by. Hansel

If I had been at that fashion show, I would have lost my shit seeing Hansel walk by. Hansel

Orochizoolander finally graduated from car seats and sitting on phone books at the dinner table and this movie was announced. It’s a good day for everybody.

Saw the clip of the maison valentino show and i kinda lost it when derek and hansel stopped at the end for their poses.
Looking forward to all of the cameos that they can cram into this movie cuz the first one was sooo OTT but hella cool at the time.

GOAT movie scene of all time. Sequel is just something thats gonna take my cash no matter what happens.

First one was epic. Hansel was so hot. Anticipating for this sequel.

And they made Anna Wintour join a selfie even though she hates it. LOL at the girl on the right containing her laughter.

I hope they make a parody of the annual Victoria’s Secret concert/fashion show and call it Victor’s Secret.

I’ll be patiently waiting for this once.

I’m sure everyone did this lol

I was too busy finding out if there’s more to life than being really really really ridiculously good looking to make a thread earlier. Thanks for not making the thread if someone did there would be a serious walk off.

Still haven’t found the answer, oh well nice to see everyone recognizes the stupidity brilliance of this film. I have very high expectations of it actually measuring up to the original only because Ben stiller guarded this sequel for years holding out until they had a really good script and writer/director Justin Theroux has leveled up a lot since Zoolander 1 he did Tropic Thunder and I expect that to carry into the sequel.

I will be posses if we dont see Will Ferrel as Mugatu though.

I hope Tyler Breeze gets to make a cameo.